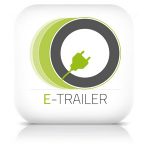 E-Trailer BV was founded by Delft University of Technology pals Rick Lenssen (CTO) and Boy Trip (CEO), in late 2015. It just so happened that Rick was a caravanner and Boy enjoyed sailing, activities that have much in common. Rick had experience in solar car racing and the two decided that Rick’s experience could be applied to the RV market. They carried out a survey to see how the caravanning public might react to their ideas. The feedback was very positive, and E-Trailer was born. Following a year of intense development work during 2016 a public launch took place in March 2017.

The response was enthusiastic and E-Trailer’s products quickly appeared in more than 25 Dutch caravan stores, with some 500 pre-sold systems delivered. At the same time the company was offered office space in a local start-up incubator for tech projects called YES!Delft, where it remains to this day. Some 15 staff are currently employed, with 10 of those directly involved in engineering. The company has won various awards including ‘Camping & Caravanning Startup of the Year, 2017’ in the Netherlands, ‘Practical Caravan accessory of the year, 2019’ (UK) and the ‘Blogger’s favourite’ European Innovation Award 2020.

The current range of sensors includes:


More sensors are in development. In six short years these two young lads from Delft have made quite an impact on the RV industry, driven on by a total belief in their product. Make no mistake they’re going places, and we’ll hear much more about their products in the future.