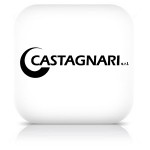 Castagnari is a family run company, with a long standing tradition in the processing of plastics. The production site is located in Recanati, in Italy’s Marches region, just a short distance from Ancona. The business was founded in 1972 by Enzo Castagnari, and has recently been taken over by his three sons. Basing its success on the growth of the home furnishings sector, particularly in bath and kitchen fixtures (its historic partnership with the Guzzini group continues to this day in spite of the recent economic crisis), Castagnari has been capable of reinventing itself since the year 2000, seeking out new business avenues, with the success of the recreational vehicle sector. Collaborating initially with Laika and McLouis, and then with other outfitters, Castagnari has made its mark at a European level, and orders in the caravan sector now total 50% of its turnover. Among Castagnari’s customers are some of the sector’s major manufacturing groups: Trigano, Adria, Rapido, etc., which are in turn divided into various brands. The production of methacrylate and polystyrene, using hot forming techniques from sheets, results in a variety of products for the living quarters of campers, including shower doors, mirrors with integrated lighting and sink tubs, to which are added various decorative finishing elements, such as frames on windows and portholes, headboards, and coverings for the lower part of drop-down beds. Thanks to decades of experience and an ongoing relationship with the technical and design development divisions of major manufacturers, Castagnari offers targeted, customized solutions, with a quick turnaround on development and production.