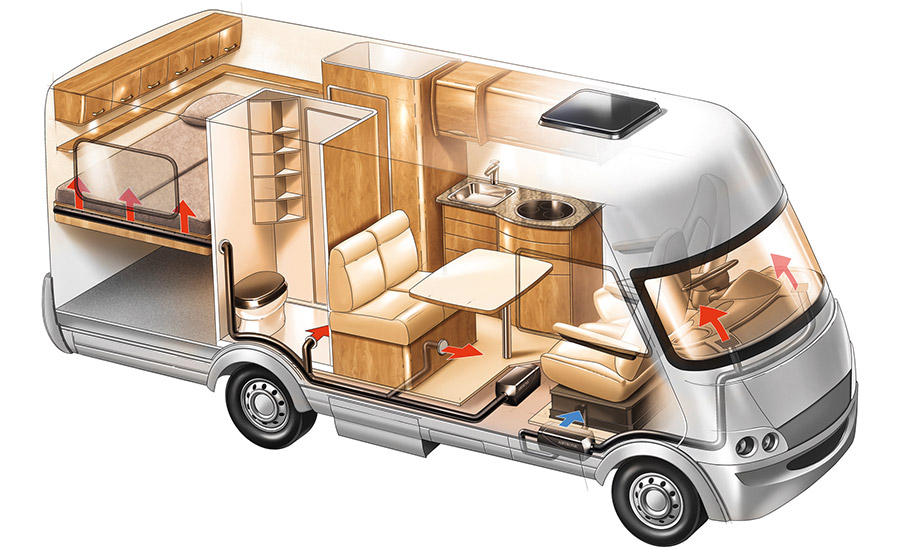 In this  feature on inventions that changed our world we look at the evolution of space and water heating systems. This time we focus on Europe.

In Europe, caravans and motorhomes first became popular for recreational use in the early part of the 20th century. These tended to be the more expensive luxury makes that relied on small solid fuel stoves for heating and sometimes boilers for hot water. In the 1930’s LPG became available and led to gas geysers producing instant hot water. These often vented to the inside of the vehicle, which was less than desirable, to say the least.
As time went on, better and more convenient solutions were sought, with inspiration initially sourced from the automotive industry which was developing fuel fired heaters for engine pre-heating or for use when parked. However, up to 1960, very few European RV’s had any form of heating or hot water. 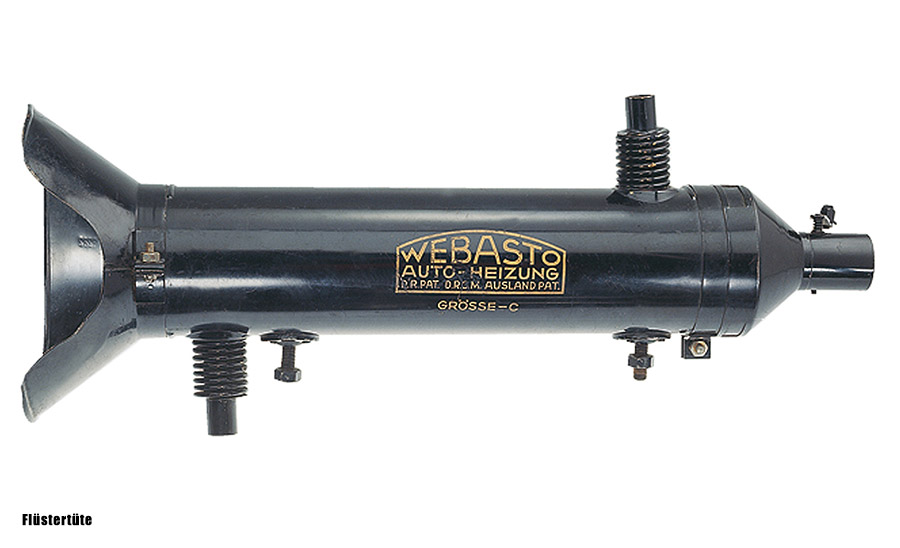 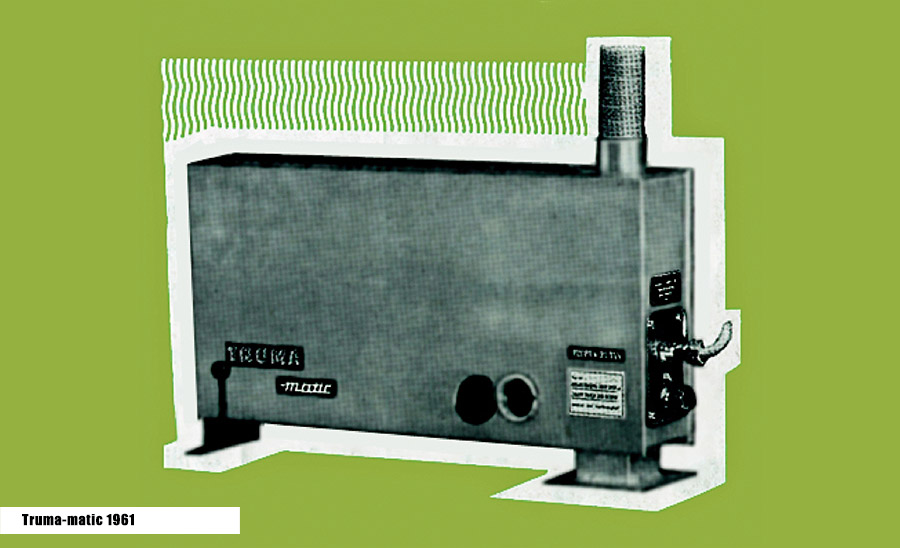 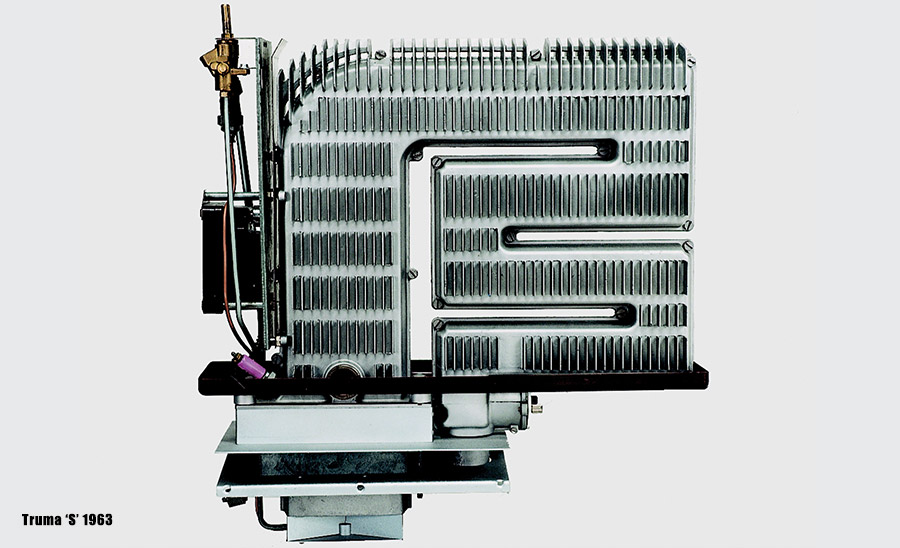 Post war revival
As caravanning took off in the post war years it was clear that something had to change. Enter German company Truma in 1961 with its revolutionary Truma-matic gas stove.
According to Truma, it became ‘the first officially recognised caravan heating system’. Piezo ignition meant all it needed to work was good supply of gas. Electricity was not required and it was entirely safe thanks to an enclosed system that kept combustion gases outside the vehicle. It also proved economical to run, due to an efficient heat exchanger.
Later that year Truma founder, Philipp Kreis, improved the design further by developing the ‘S’ shaped heat exchanger. This still forms the core element of Truma’s S heaters to this day. 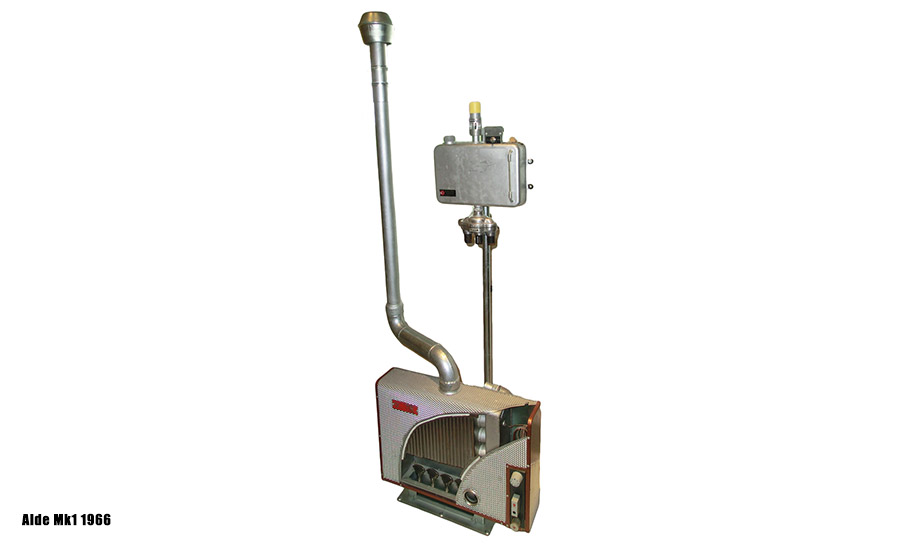 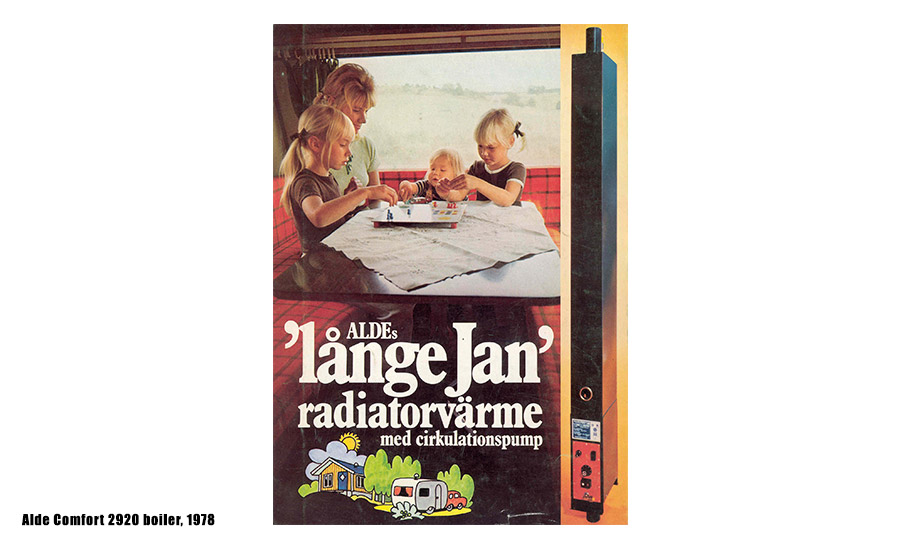 Philipp Kreis was not alone when thinking about mobile heating. In Sweden, a certain Alde Rask was working on a hydronic solution. He figured that using a liquid was the best way to distribute heat evenly to the corners of a vehicle, especially in the severe winter weather that can affect that part of the world. In 1966 his first mobile boiler saw the light of day after an intensive period of development. The boiler became renowned for its efficiency and the Alde name synonymous with comfort.
To distribute heat, Kreis took a different route and added warm air distribution to his device, the first examples surfacing in 1968. These provided a lighter and simpler solution, albeit needing slightly more power to move the heat around. The two main types of space heating system – blown air and hydronic, had now become established.
It’s worth saying that both Truma and Alde were arguably years ahead of their time, as winter caravanning was very much in its infancy with few sites open and not many well insulated vehicles to enjoy it. Indeed, many caravans, particularly those in mainland Europe, were just used for one big summer holiday on a site with good washroom facilities. In these circumstances, space heating and hot water were not so important.
The author’s first caravan, bought new in 1974, had no water or space heating of any kind. But expectations were changing and, after recovering from the fuel crisis of 1973/4, when the price of oil rose nearly 300%, RV manufacturers began to offer space heaters in some models. 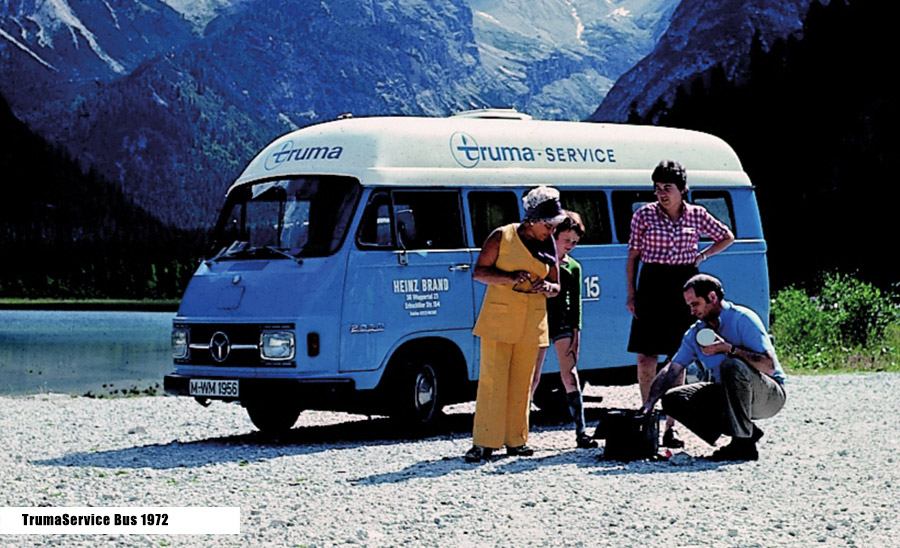 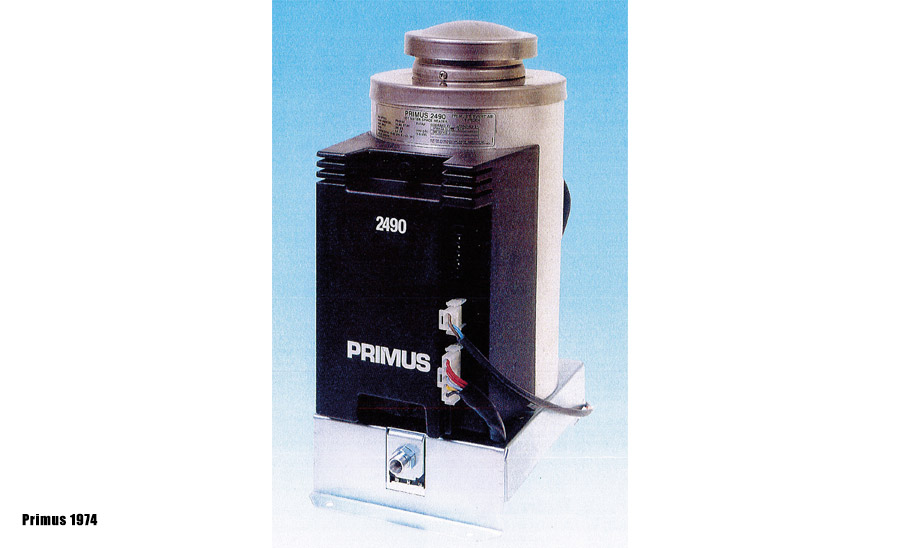 1970’s boom years
But there was another requirement crying out to be met – that of water heating. Alde Rask was already heating radiators with his boiler, all that was needed was an additional jacket to keep the fresh water from that in the radiators. This came in 1973 with the introduction of the Comfort range of boilers.
Early customers included Adria and the Swedish manufacturer, SMV. It marked the start of rapid development for Alde with increases in both the size of the factory and the number of employees.
With all forms of camping now firmly taking off Truma decided to set up its own mobile service organisation in 1972. It was a first in the market place and no doubt greatly helped Truma’s market penetration. 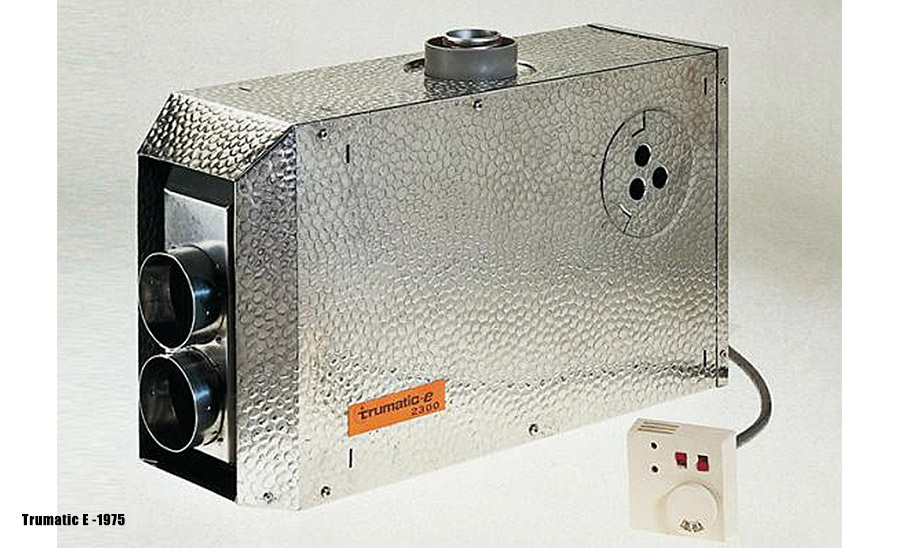 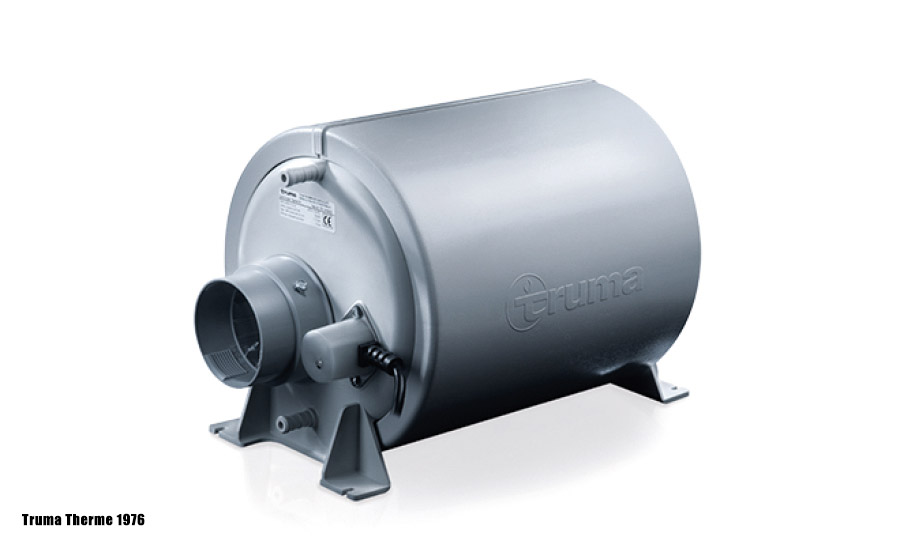 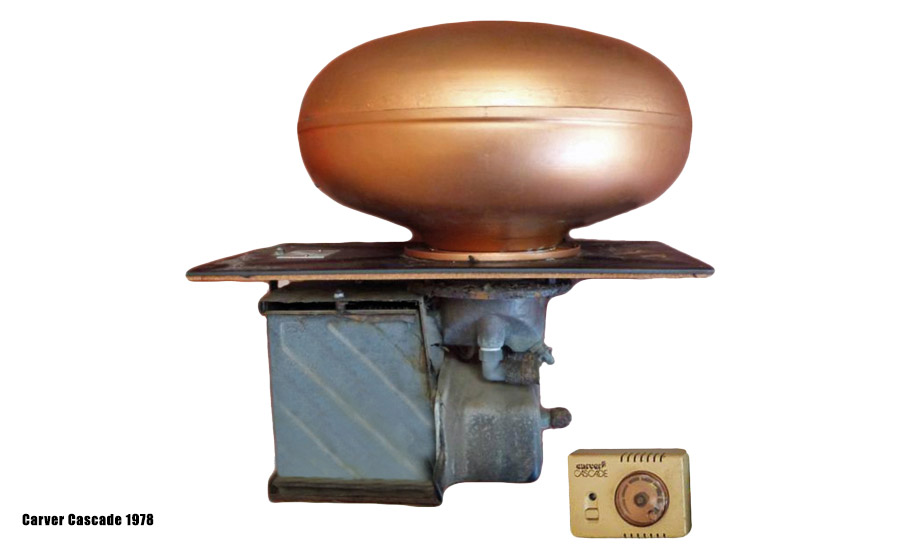 Sensing the new optimism and spurred on by Alde’s success, another Swedish company, Primus (famous for its paraffin camping stoves), launched a hydronic heating system for the European RV market in 1974. It proved quite popular with sales reaching 15,000 units per year by 1990. Unlike Alde, it used a dedicated heat exchanger on the radiator circuit to provide hot water. As standard, it vented to the inside of the RV although a direct vent kit could be specified.
1975 saw the launch of Truma’s Trumatic E heater, an electronically controlled, blown air device. Powered by LPG and with a balanced flue, it could be installed in mobile homes, boats or trucks.
In 1976 Truma hit on the idea of using the heat from its blown air system to heat water and the Truma Therme was born. For summer use, the Therme was fitted with an immersion heater. It’s another successful idea that has stood the test of time, as the Therme is still produced today.

Water heating gains ground
About this time British company Carver, decided to get in on the act. They began by assembling and selling Truma heaters to the UK market whilst, at the same time, developing their own water heater – the Cascade. This launched in 1978 and featured an unusual mushroom shaped copper cylinder covered in a red insulating jacket. It was heated by an underfloor burner with electronic control.
By 1980, space and water heaters were becoming regular features on the options list, particularly on British caravans. As the decade progressed, many of those options turned into standard items and the surge in demand led to a wave of new products. Truma’s ‘S’ series heaters became very popular for their efficiency and independence from an electrical supply. 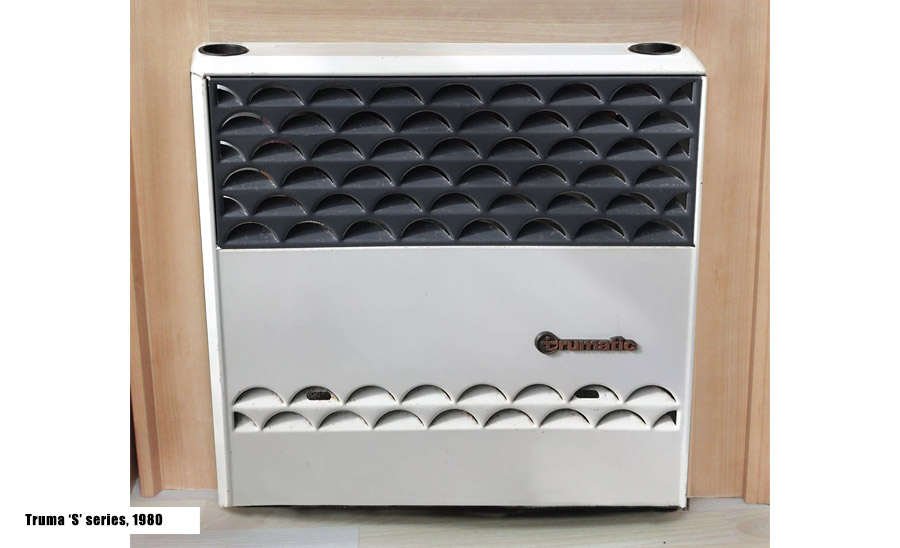 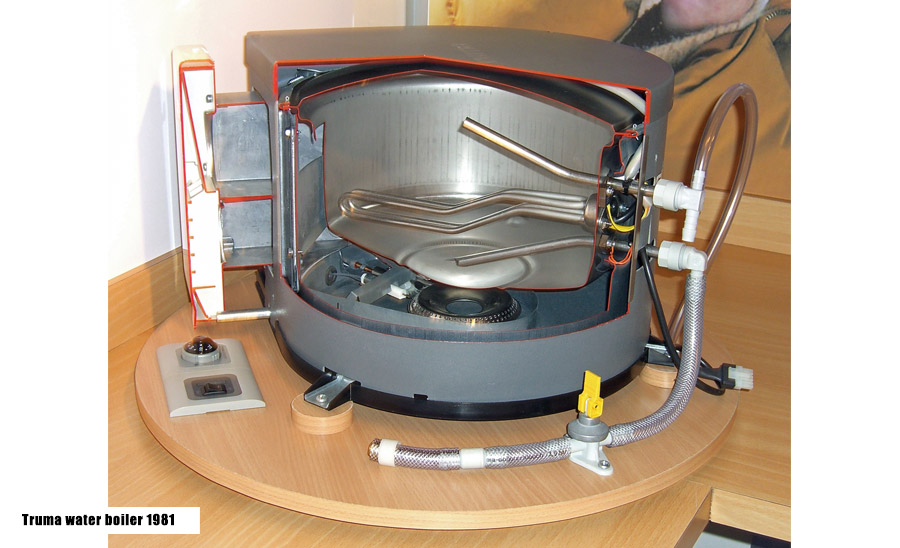 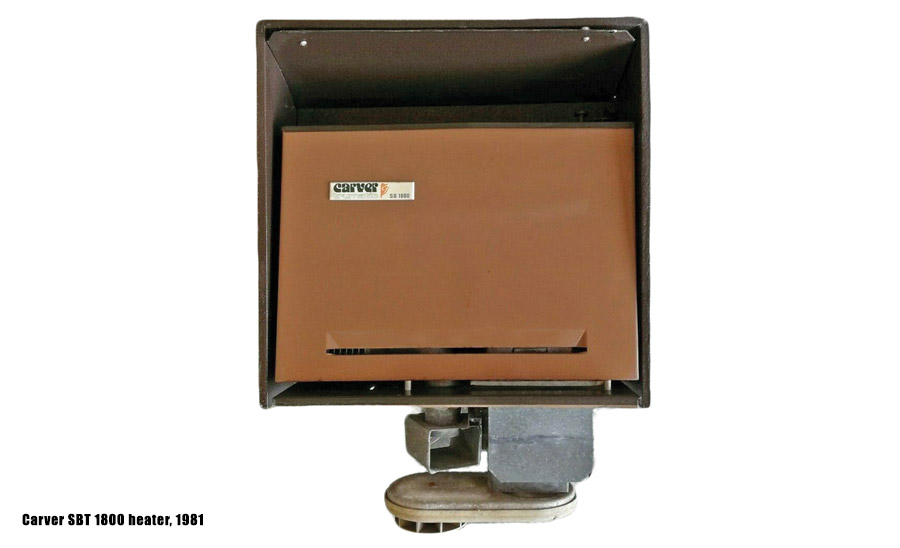 In 1981 Truma launched its first water boiler in both gas and gas/electric versions. Available with both 10 and 14 litre capacities, it came with a stainless-steel tank, variable temperature control and electronic surveillance. It promised ‘pure showering pleasure – and not just for the little ones!’ .
The success of Carver’s Cascade water heater, combined with the increasing demand for heating products, led Carver to begin making its own space heaters, rather than assemble those from Truma. Launched under the Caravelle brand name, and with electronic control, they appeared in 1981 and cornered the UK market. There was a 1.8 kW underfloor flued model and a 3.0 kW roof flued model. Both were similar to Truma models but sufficiently different to avoid patent issues.
In the meantime, Carver updated its quirky Cascade water heater by launching the Mark 2 in 1985. This featured the addition of electric heating and a wall mounted flue, doing away with the need to cut a hole in the floor. It proved extremely successful and, with minor modifications, became the prevailing water heater for British caravans for the next 16 years.
By the time the 1990’s arrived space heating and hot water were becoming standard on all but the most basic caravans and motorhomes in the UK. However, in mainland Europe the demand for hot water remained low, because of the different way in which many of the RV’s were used. It wasn’t until the later 90’s that water heating became standard.

Hydronic heating takes off
In 1993 Alde launched its Compact 3000 combi boiler. Weighing in at just 15.8 kg dry, it was small enough to fit inside a bunk, yet provided 6 kW of gas heating and up to 3 kW of electric. Compared to the previous taller and heavier 2900 series it was something of a game changer and accelerated the adoption of Alde heating by various RV manufacturers.
By now, other companies were seeing the growing market for RV heating and launching their own products. Belling launched the Malaga, a rather large 13 litre gas/electric water heater principally aimed at the horse box and motorhome conversion markets. Nevertheless, its 13-litre capacity found favour with UK manufacturers Bailey and Fleetwood who fitted it to several models in the mid ‘90’s.
Spurred on by the success of the Therme, Truma went on to launch the Trumatic C in 1994. This was essentially an LPG fired blown air heater with a 12-litre water jacket to provide warm water. Aimed at the growing motorhome market, it was an instant success, with many manufacturers adopting it. Sales, especially in the UK, were helped by the option of up to 1800 watts of electric heating. This is interesting because on UK campsites, electricity is usually included in the pitch fee. In mainland Europe, it can be a significant extra cost.
By 2000 the market for space and water heating was strong across all markets. Carver was doing really well in the UK and was beginning to look at mainland Europe. Truma decided it was time to act and purchased Carver’s RV water and space heating business, leaving Carver to focus on its other interests. 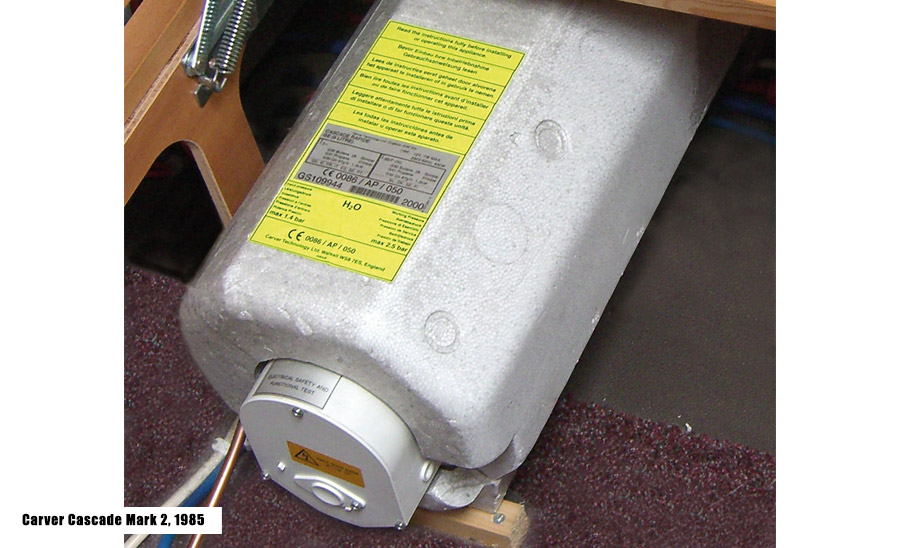 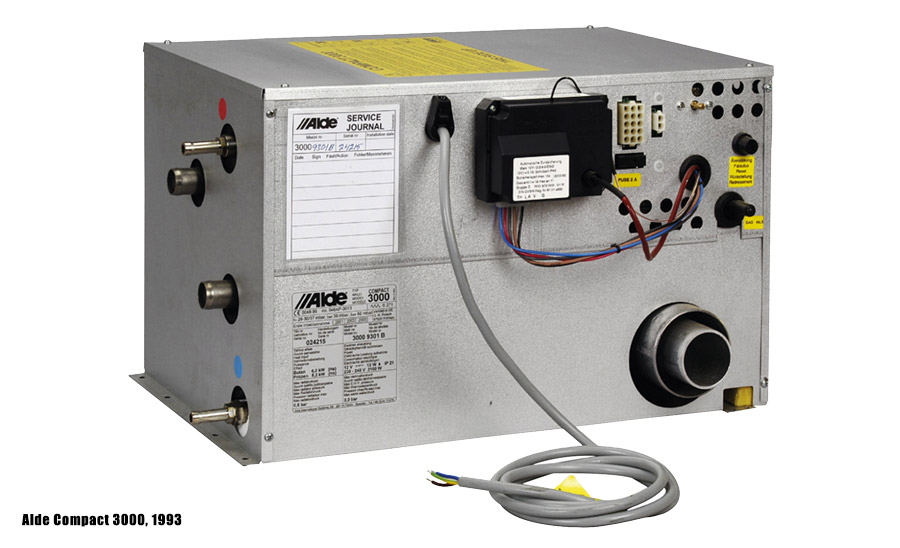 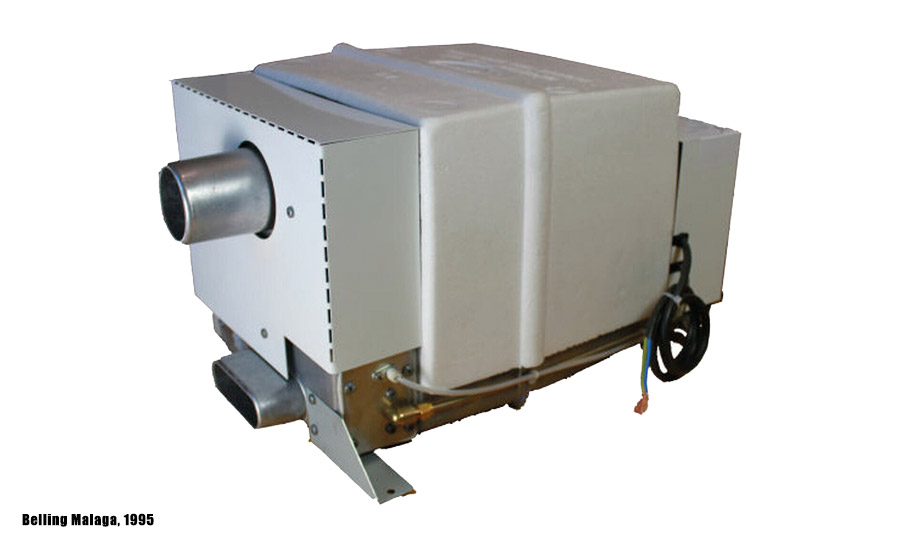 In 2007 Truma launched its Combi series of combined space and water heaters, replacing the Trumatic C series, of which some 500,000 were built. The new unit was smaller and lighter with the burner chamber horizontal rather than vertical. This allowed it to be mounted inside bed bunks and the like. It was soon joined by a diesel-powered version which, at 15.8 kg, claimed to be the lightest and most efficient diesel combination heater on the market.
In the meantime, Propex had acquired the Burco Maxol (Malaga) water heater before selling the design rights to Whale, who manufacture it today on their behalf. Whale took a long hard look at the design and decided they could improve it. The result was Whale’s first water heater, which launched in 2009. Despite being engineered to an altogether higher standard than its Propex sibling, its size and weight limited take-up in the RV market.
In recognition of this Whale launched an 8-litre version in 2011 with the same gas burner but more electrical power. Weighing 8 kg dry and christened the ‘Rapid Heat’, it can raise 8 litres of water from 15 °C to 70°C in just 12 minutes, using gas and electricity combined.

Space saving underfloor designs
As well as buying the design rights to the Malaga water heater in 2009, Whale also bought the rights to the Propex range of LPG blown air space heaters. Re-engineered, and with the addition of electric heating, the new heaters launched Whale into the RV space heating market. Their slim design uniquely gave Whale the opportunity to offer them with an underfloor mounting option. The first one appeared in the Elddis Xplore 302 two berth caravan in 2010.
Early examples proved a little noisy and could not use gas and electricity simultaneously but these problems were soon overcome. 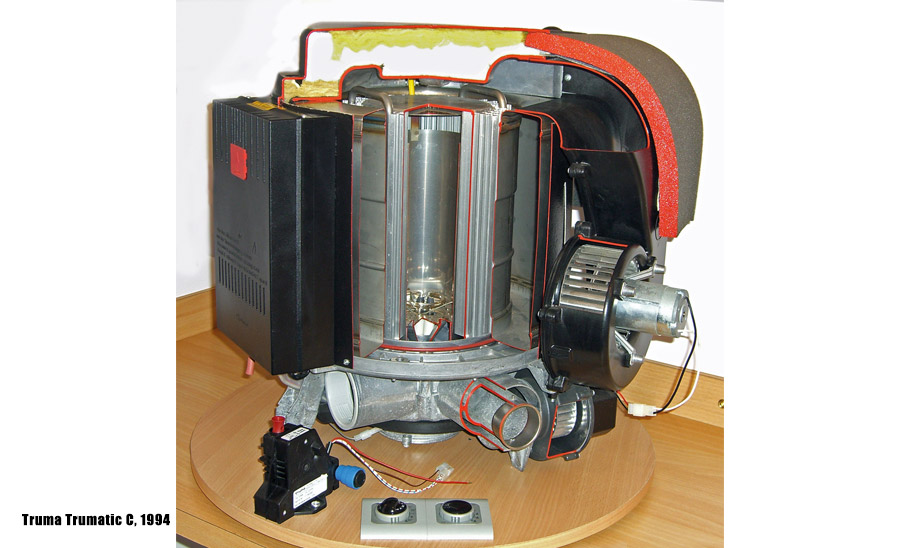 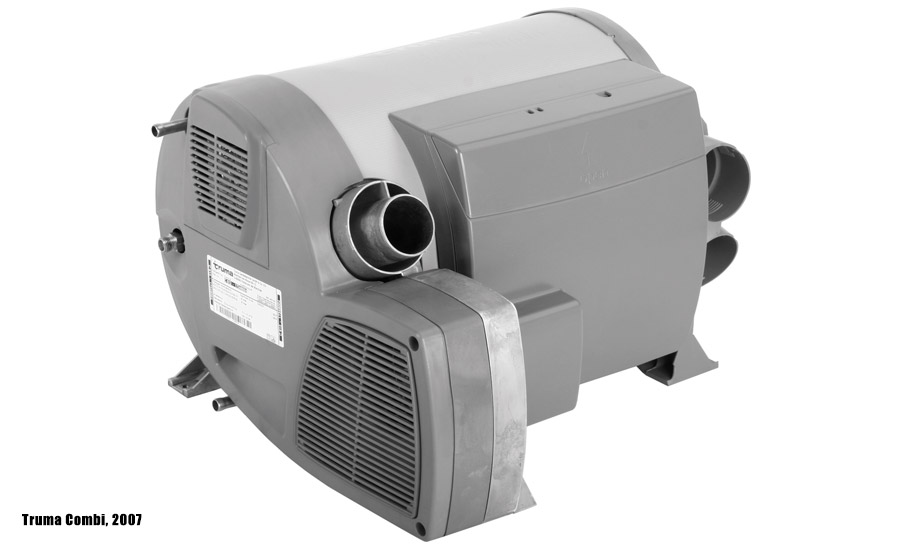 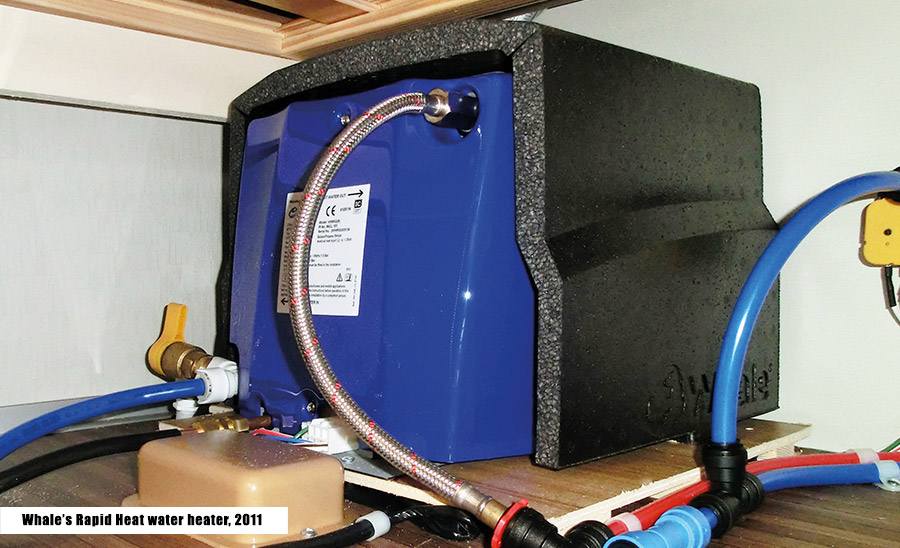 It soon became clear that Whale needed an underfloor water heater to complement its space heaters. This came in 2015 with the launch of the Expanse product. Its gas burner is entirely contained within a stainless-steel water jacket, which is surrounded by thick insulating foam inside a tough polypropylene case. An immersion heater allows for electric heating and rapid warm up times. The whole arrangement is very efficient and keeps the water warm for long periods .
In 2017 Truma replaced its popular Trumatic E series warm air heaters with the smaller and lighter VarioHeat range featuring efficiencies up to 98% and an add-on electric heater for extra versatility.
Whale’s Heat Air range of products launched in 2019. Lighter and more convenient than the older Propex derived models the new heaters are designed to be interchangeable with similar Webasto diesel products. 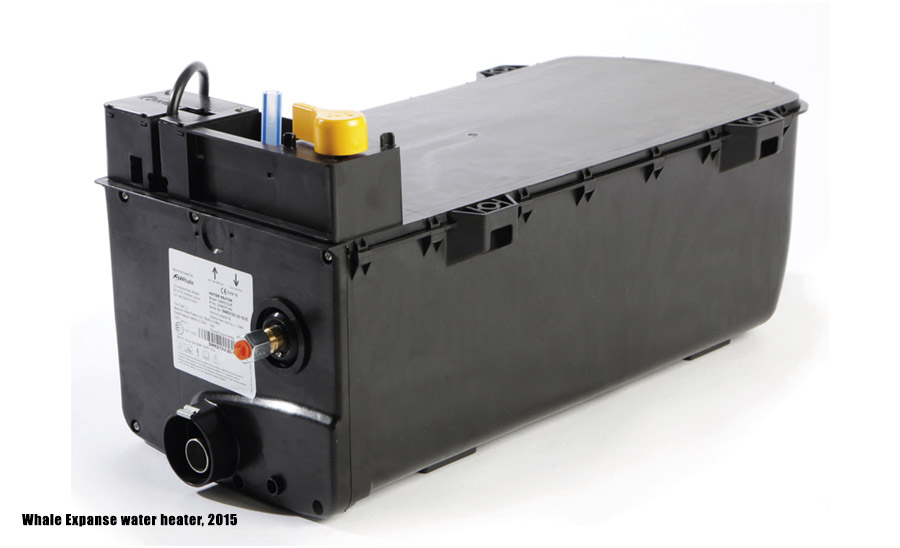 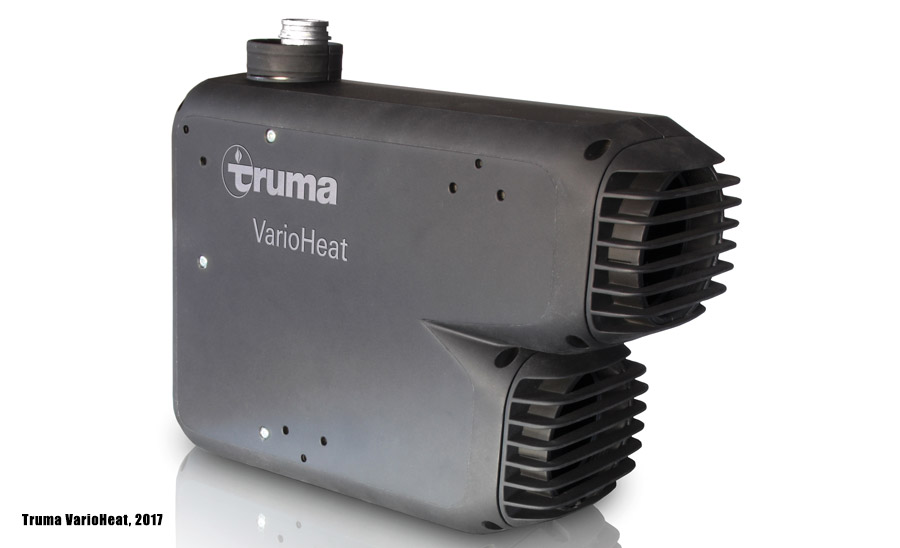 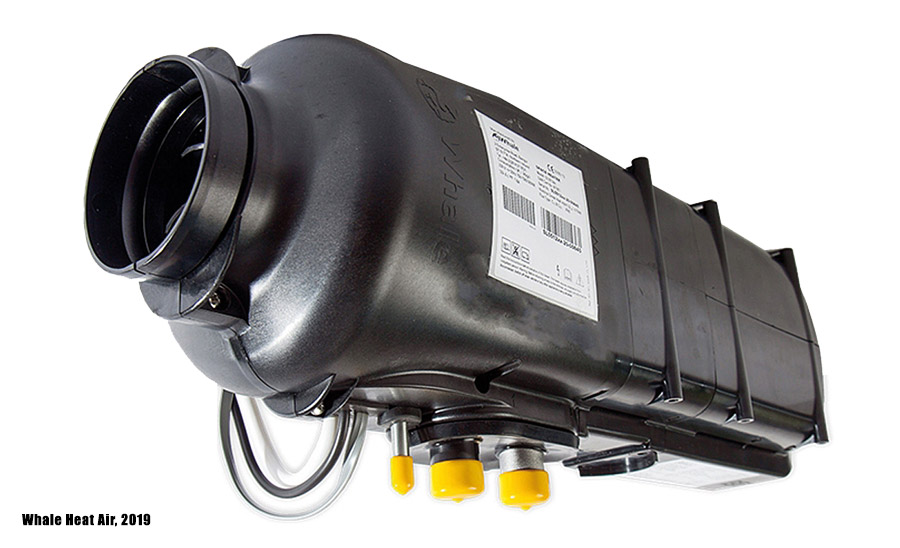