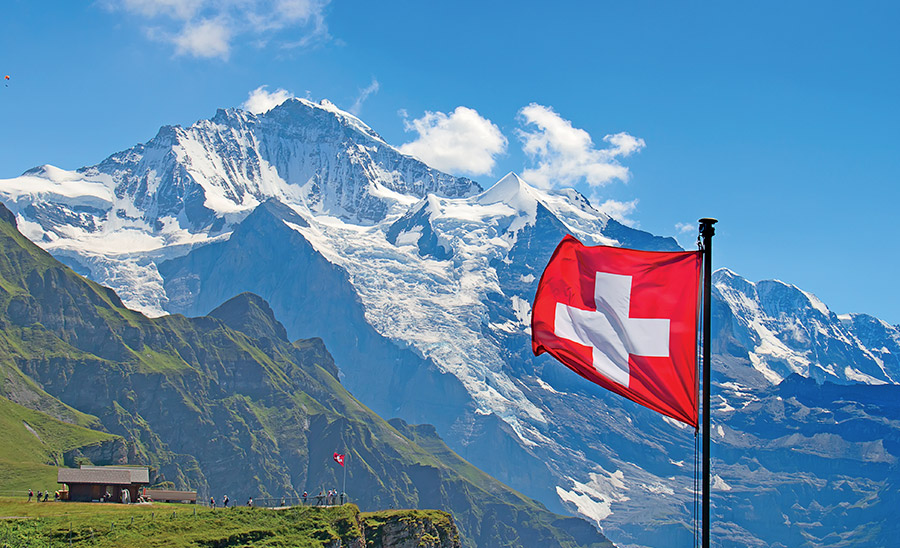 After three consecutive years of growth, the recreational vehicle market in Switzerland experienced a spectacular boom in 2021 which led it to become the fourth biggest market in Europe for sales of new motorized leisure vehicles

The Swiss motorized RV market recorded peak sales of 8,457 units in 2021, and 1,144 of which were in March. This progression does not seem to be stopping this year, with 2,064 new leisure vehicles registered in the first quarter. These statistics describe a non-stop growth since 2009, when 1,575 motorized units were sold. Since then, the caravan market has grown slightly, while the motorized one has grown almost sixfold, with only two marginal setbacks in 2013 (-2.0%) and 2018 (-1.1%) compared to increases of 36.1% in 2011, 19.7% in 2019, 25.8% in 2020 and 26.4% in 2021.
According to insiders, such as Christoph Hostettler, President of Caravaning Suisse, the Covid-19 pandemic played an important role in doubling sales in the last three years. It prompted many families to choose the safety of a confined and highly controllable environment to eat and sleep for holidays, instead of stays in hotels or renting summer houses. But the market had already doubled in numbers between 2010 and 2016, with the greatest number of sales concentrated during the period between March and July, the main holiday periods. With a population of around 8.5 million people, in 2021 Switzerland showed the highest ratio between sales of recreational vehicles and residents.
The number of people staying in Swiss campsites and overall overnight stays is rising, but not with the impressive percentages of “new purchases” of liesure vehicles. The most accurate statistics stop at 2020 and describe a growth of about three percent compared to the previous three years, with a significant prevalence of local tourism compared to foreign guests.
The 396 Swiss campsites, are distributed with a certain regularity throughout the country, but the largest number are in the cantons of Bern, Valais, Grisons and Vaud. The average period of each overnight campsite stay for Swiss tourists was 3.3 days per stay, compared to 2.7 days for foreigners (however, the average for Dutch visitors is 3.5 days, as well as neighbours from Liechtenstein), slightly down compared to 10 years ago, when the Swiss stayed for an average of 3.5 days per stay and foreigners, 2.9 days per stay.
In the first nine months of 2021, overnight stays in Swiss campsites exceeded five million, with 20% being foreign visitors; that is one million more overnight stays than in the whole of 2020 and two million more than in 2017, confirming that the desire for camping in Switzerland is not only measured by the growth in sales of recreational vehicles but also in days spent camping.
When it comes to the types of vehicles sold, Switzerland appears rather aligned with the trends of the European market. In fact, it emphasizes the trends, showing a clear prevalence of the campervan, which represented 69.8% of the sales recorded between September 2020 and July 2021, against 48.1% of the EU average, 51.4% of the German market and 50.8% of the French.
A good reason for this could be the better handling characteristics of the latest generation of base vehicles and because van conversions don’t have protruding bodywork that on the mountain roads of this country, could create some difficulties for the driver.
In second place, with 16.1% of sales in this period, are semi-integrated models, and in third place are motorhomes, with 5.9%, mostly purchased by more mature and wealthier customers who seek the best in terms of space and comfort. Overcabs, once dominant in sales but now penalized both by their considerable height and higher fuel consumption, represent 2.5%. By way of comparison, the European Union market compares to the Swiss ranking but with different percentages: 48.1%, 33.8%, 10.5% and 4.1%. 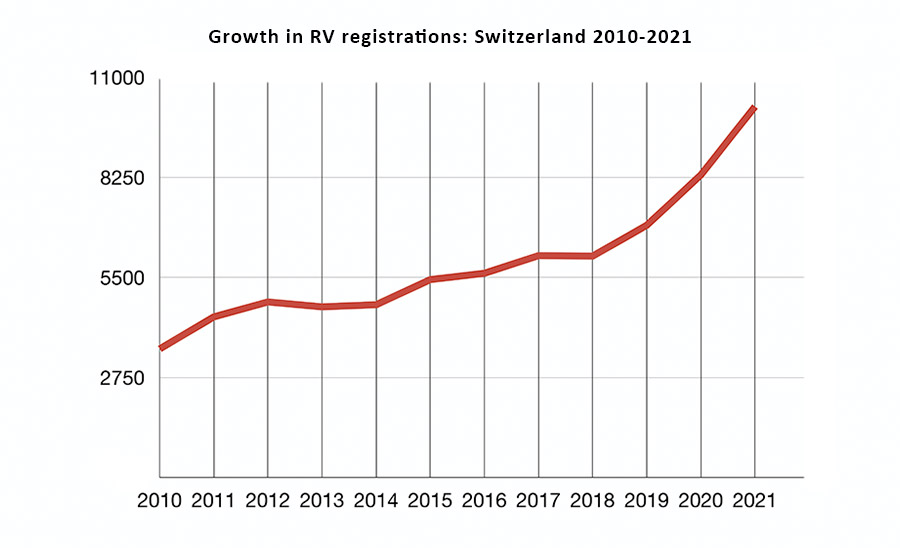 Production and sales
As with car production, Switzerland also represents a marginal presence in the recreational vehicle industry, making it a winning market for the major European manufacturers and converters. The exception is a few artisan companies that make 10 to 50 units per year each, such as Kaiser Motorhomes GmbH, Tartaruga AG, Yellowcamper AG and Maurer, which mostly make premium motorhomes offering extreme levels of customization – and prices to match. The Slovenian manufacturer, Adria, is the only company in the RV industry to mark its presence on the Swiss market with a national subsidiary her, Adria Mobil Schweiz GmbH; its dealers sell to the end customer, and also sell second-hand models that are generally very well maintained (thanks to the severity of periodic reviews in Switzerland) and are consequently quite expensive.
One of the most active retailers is Bantam Camping, which has three large outlets in the cantons of Bern, Vaud and Zurich, while in Italian Switzerland, the Swiss Camper Store stands out in Cadenazzo, between Bellinzona and Locarno. Also noteworthy is Ruchti AG, near Thun, in the Canton of Bern, which distributes some of the main German brands, while for the online second-hand market, the Swiss mainly consult Caravan24.ch, a marketplace where you can find everything, from the T5 California with 300,000 kms to the 200,000 Swiss francs motorhome at zero km.
The annual Suisse Caravan Salon in Bern (27-31 October 2022) is the only national show of its kind in Switzerland, but there are frequent local or cantonal events, sometimes organized by the larger dealers.
Here are a few bureaucratic notes to end this overview of the world of recreational vehicles in Switzerland: officially, camping is only allowed at official campsites and lay-bys, but in some areas the occasional free camping for one night is tolerated. However, it is better to rely on recognised campsites where you can get supplies and connect to electricity, especially during those cold winter climates in a predominantly mountainous country.