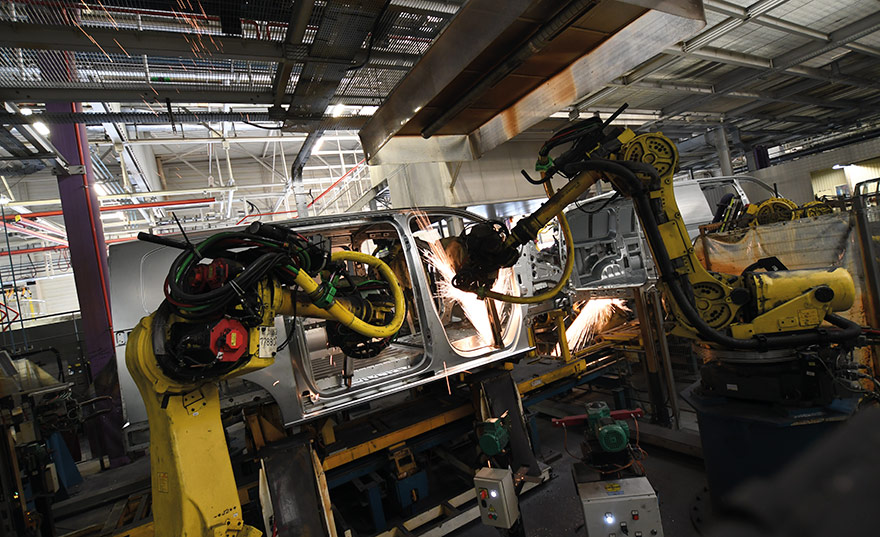 SpaceTourer: drive like a car, spacious as a van

We were welcome by Pascal Belot, Camping-Cars International Manager, Light Commercial Vehicles Business Unit, and Patrice Le Guyader, PSA Northern France Manufacturing Division Managing Director, and invited to find out more about the success of the Citroën SpaceTourer minivan, which is now used in the European RV sector, as the base vehicle for the Campster multi-purpose van from the manufacturer Pössl.
The PSA Hordain plant, built in 1992, is like a city where 2,800 employees assemble 630 vehicles a day. These are produced as the Citroën SpaceTourer, Peugeot Traveller and Toyota Proace Verso, with commercial variants as the Citroën Jumpy, Peugeot Expert and Toyota Proace. The production quotas of the two French brands are the most dominant (80% Peugeot / Citroën, 20% Toyota) with three teams alternating in three shifts of seven hours long each. Increasing demand for these vehicles means that shifts and staff will increase again.
What immediately fascinated us about a vehicle like K0 (the modular PSA platform EMP2) was its ability to be transformed into so many variants, in order to match the needs of those who drive it, without any bodyshell changes. This level of versatility is not common with many other vehicles.
In the competitive automotive market, especially for a multifunctional vehicle customizable by the customer, modern technology is used to provide fundamental comfort, energy efficiency, performance, safety, multi-functionality and style. Instead of simply turning a commercial vehicle into a car, PSA has done the exact opposite – by creating a car capable of transforming itself into a commercial vehicle. This was a core objective of the PSA K0 project that gave birth to the Citroën SpaceTourer minivan. 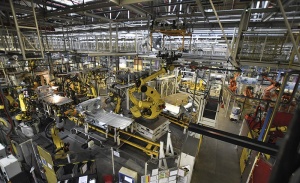 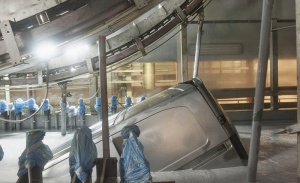 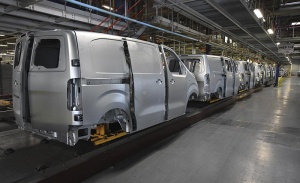 A multi-functional and modular vehicle
K0 was an ambitious project based on the PSA EMP2 modular platform. The use of high strength steel, aluminum, magnesium alloys and composite materials have helped achieve a weight saving of around 70 kg compared to the previous generation model, to offer improved efficiency, performance and fuel consumption. This automotive platform is shared with several of the most modern and prestigious models from PSA: second generation of Peugeot 3008 / 5008, Citroën C5 Aircross, DS 7 Crossback, Opel Grandland X, the brand new Citroën Berlingo / Peugeot Rifter/ Opel Combo and the next generation of the Peugeot 508.
K0 is not just a car or a van: it can be classified as a multifunctional vehicle that is modular and a successful for a variety of different uses. The manufacturing quality is the same as the cars of the respective brands. This was made possible thanks to a production process with the precision of robots and control machines which give each operator the ability to re­port, intervene and stop the production of any item. So, if there is the slightest defect, it can be solved at this early stage, which avoids unwanted con­sequences on the overall quality of the vehicles.­ To manage a continuous production process, with many variants, you need skills, attention to details and maximum technology: the work of the latest generation robots can weld and create the bodywork with total precision.
The large number of variants include the choice of: three different body lengths, a 4×4 pre-equipped version, four engines and three gearboxes. The BlueHDi Euro 6 diesel engines are very efficient, available with four 1.6-litre and 2.0-litre units (with 95 and 115 hp, and 150 and 180 hp, respectively) combined with three different gearboxes (manual, robotized, automatic). The automatic transmission is supplied by the Japanese Aisin brand.
The width and height of all K0 models are the same at 192 cm and 190 cm respectively (so low enough to use a normal underground or beach car park without problems).
There are five types of bodywork (Commercial Van, Crew Cab, Platform Cab, Combi and Passenger Car) and almost endless customizations designed by PSA, to better meet the needs of the customers. Body-lengths include: the “Compact”, which is 460 cm long with a 292.5 cm wheelbase, for those who favour maximum manoeuvrability, the “Standard”, which is 35 cm longer (total length of 495cm) with a 327.5 cm wheelbase; and the “Long”, with a total length of 530 cm created by having a longer rear overhang to maximize the load volume.
These can all be combined with front-wheel drive and also 4×4 by the European specialist Dangel. Safety is not lacking either: K0 has achieved an overall result of five stars in the protection of passengers and pedestrians (87% adults, 91% children, 64% pedestrians, 78% Safety Assist) in EuroNCAP crash tests. 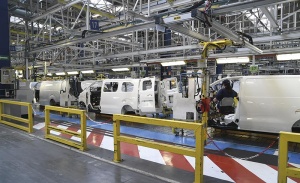 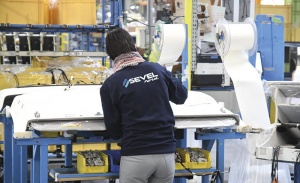 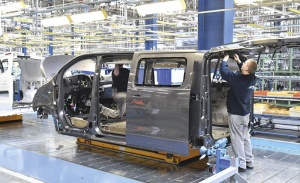 High customization
Every day, after leaving the assembly line and carrying out all the quality checks, 1/3 of the vehicles produced at Hordain pass to a dedicated assembly line to fit additional equipment requested by the customer at the time of ordering. This includes: internal coverings, towing hooks, luggage racks or glove boxes, ventilation systems: everything is already planned and prepared, ready for quick, precise and orderly assembly.

CAMPSTER by PÖSSL
The Campster, a multi-purpose van by the European RV brand PÖSSL has just been launched, but is already a commercial phenomenon. It is not an alternative to a car, but instead is a real car developed to offer comfort, practicality and maximum configurability for every day of the week, and every occasion. With a body-length of 495 cm, width of 192 cm and height of 199 cm (including the elevating roof) the Citroën SpaceTourer can be a real mini-camper with four berths provided by two double beds (one in the roof and the other from converting the sofa bed), four seats at the table (swivel cab chairs, central table and rear sofa), full kitchen (sink, stove and two ways to install the refrigerator), or it can become a comfortable mini-van with entrances on both sides (two rear sliding doors) and can accommodate up to seven passengers in three rows. The kitchen unit can be removed in a matter of minutes to create more space (for extra seats, etc) or for the kitchen to be used as a standalone unit outdoors. Alternatively, if more load space is required, simply remove any (or all) seats not being used; if you want to carry bikes and people, keep the individual seats, on the same side in different rows to create space to put the bikes on the other side. The Campster is a real “One for All” vehicle, full of unique points, as highlighted by Thomas Liebscher (Pössl Managing Director) who actively participated in the birth of the Campster project: “When creating the Campster, we thought about the practicality of use: each owner can use it as a real seven-seater or as a transport van during the week and easily turn it into a camper for the weekend” – says Liebscher. “The two side sliding doors guarantee maximum ease of access, as in a normal car, while the rear opening window is a feature practicality unknown to the camper sector. This is all provided with the elegant and dynamic look of a car: in fact, the Citroën SpaceTourer is the only camper to offer the same design, performance and technology as a car because it was not born as a van, but created as a car, with lower fuel consumption and running costs,” Liebscher continued. 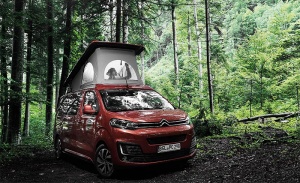 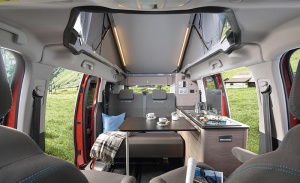 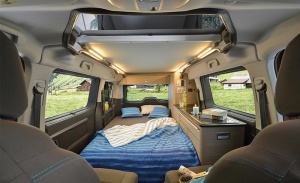 Citroën, leaps forward into the world of recreational vehicles
Citroën’s commitment to the recreational vehicle segment is growing significantly: as illustrated by Pascal Belot, the Camping-Cars International Man­ager of the Light Commercial Vehi­cles Business Unit. The growth in 2017 was 76% due to both the development of SpaceTourer, whose sales have increased six fold, and its Citroën Jumper/Relay sibling which is more and more present in the van conversions and motorhome ranges of the main European manufacturers Erwin Hymer Group (Bürstner, Carado, Dethleffs, Etrusco, Sunlight), Pössl Group (Pössl, Clever, Globecar, Campster), Trigano Group (Adria, Sunliving, Elios), Rapido Group (PLA,
GiottiLine, Itineo, Wildax), Ilusion, LaStrada. The Jumper/Relay model is the flagship of PSA production, with modern BlueHDi Euro 6 engines utilizing the latest generation emissions technologies (selective catalyst SCR + AdBlue) with fuel consumption that ranges from just 6 liters / 100 km (47mpg). The HDi en­gines is are produced at the pace of 7,000 units a day; so far, over 10,000,000 HDi and 1,000,000 BlueHDi have been produced. The secret of Citroën’s success is due to the great variety of model variations offered: not only 3 power levels (110, 130, 160 hp), but also the possibility to choose the Poclain reinforced motricity or the Dangel 4×4 all-wheel drive, available on 160 hp engines as well, with possible disconnection, in order to reduce the fuel consumption and the CO2 emissions. Other benefits include an increased ca­pacity alternator, of 220 Ah, providing maximum recharge for the on-board batteries, extremely long servicing in­tervals (2 years or 50,000 km), timing belt renewal (10 years or 150,000 km) and a large Eu­ropean repairers coverage of over 13,000 Peugeot and Citroën service points.