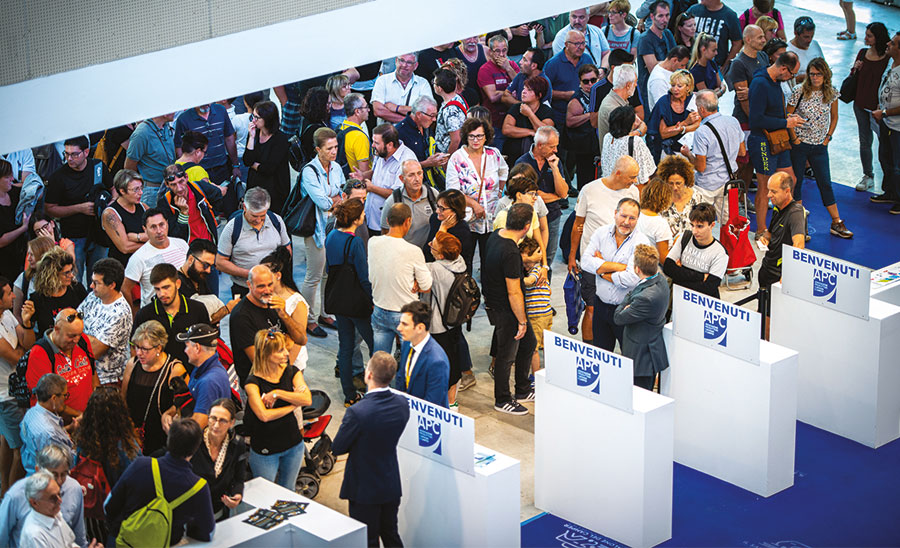 Italian camper production is high and growing steadily, even if the domestic market itself is not as strong as it was in the past. The recent Salone del Camper in Parma fair demonstrated the prosperity of the sector.

The Italian market is still trying to grow, but the high sales figures from before the recent economic crisis still seem some way off. However, from its lowest point of sales of only around 3,000 units, it has risen to over 6,000 registrations, which is promising. Italy is suffering from political uncertainty that creates economic concerns and ups and downs in the economy. Furthermore, compared to France, Germany and the UK, the market in Italy is almost exclusively campers/motorhomes with only a small number of caravan sales.

Judging by the increase in visitors to the Salone del Camper in Parma, there is still the desire to buy a camper. In 2018, motorhome registrations in Italy grew by 20 percent and motorhome production remains high, with 85 percent of them destined for export.

Antonio Cellie, CEO of Fiere di Parma said: ìRecreational tourism is confirmed as the new frontier of world tourism, especially because it currently represents the greenest and lowest environmental impact.î

Out of all the models on show in Parma, campervans are certainly a growing phenomenon in Italy and there are few brands that do not have them in their range. There are also many semi-integrated motorhomes, almost all with a drop-down bed, and many motorhomes in the growing € 60-70,000 price segment, with Italian models such as Laika Kosmo series 9, Elnagh Magnum, Etrusco I and McLouis Nevis. On the other hand, there were few models shown with overcab bed that used to be so popular in Italy about 10 or 12 years ago. There are a few manufacturers still offering them, such as Elnagh, Rimor and McLouis, plus XGO, Laika and Etrusco, as well as CI and Roller Team.

There were very few caravans at the Parma fair: no Italian companies produce them, so the only models on show were from the Knaus-Tabbert Group, and from Hobby, Fendt and Adria.

Another semi-integrated model with a drop down bed at the rear, a solution that more than one manufacturer is experimenting with, was from Rimor, with its new Evo 77 Plus, built on a Ford Transit cab. This model offers two living areas and two drop down beds, with one each in the front and in the rear area. The length remains below 7m, with a price of around € 50,000. 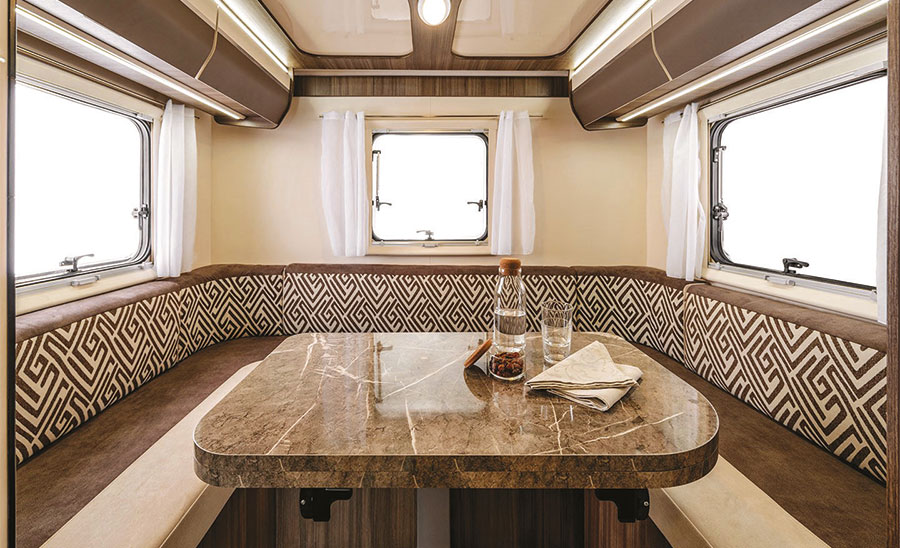 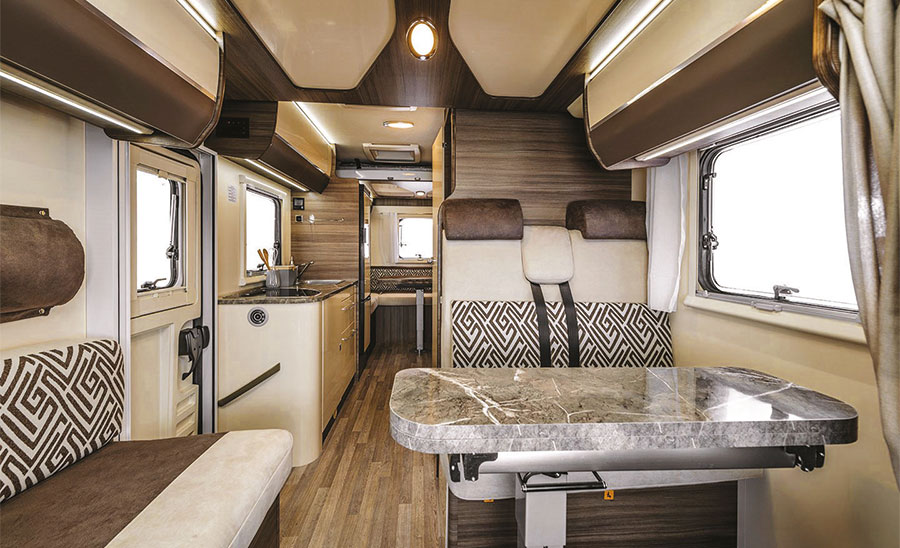 The Italian division of the Trigano group has invested heavily in the design of double-floor models to offer at a competitive price. To cut costs, they have used a common platform and use similar body and furniture parts, but the products differ thanks to shapes, colours and materials, especially in the interiors. They are semi-integrated and about 7.5m long with a double pass-through floor, tasteful furnishings and prices from around € 62,000 to € 70,000. The CI Riviera and the Roller Team Granduca, as well as the Krosser Mobilvetta, are slightly higher in luxury. 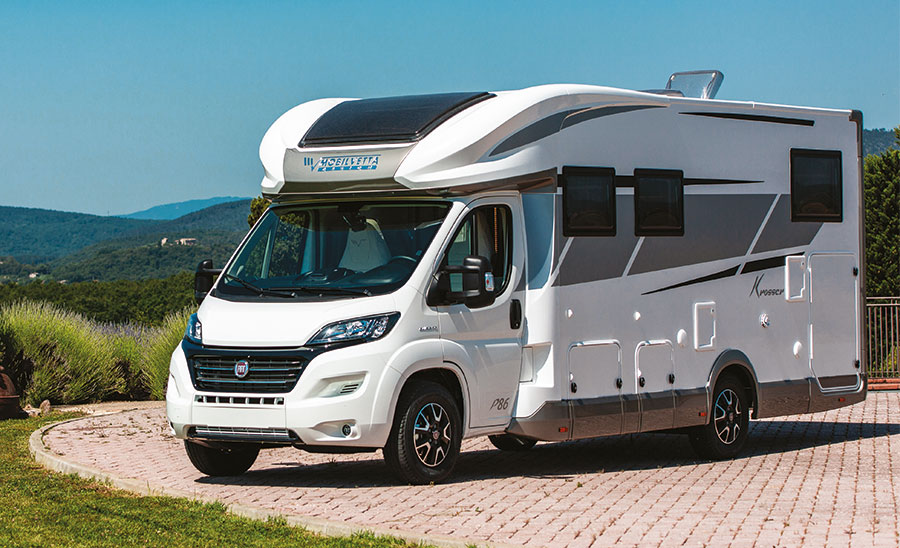 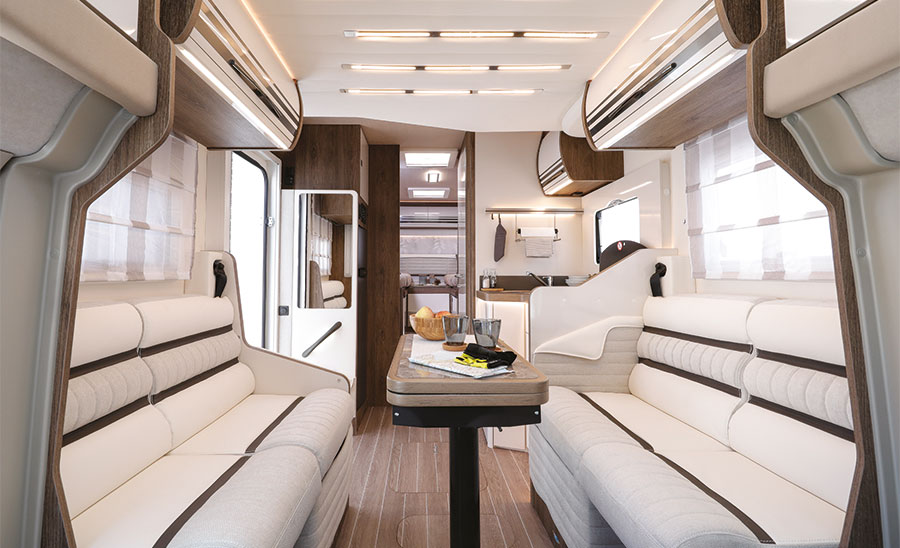 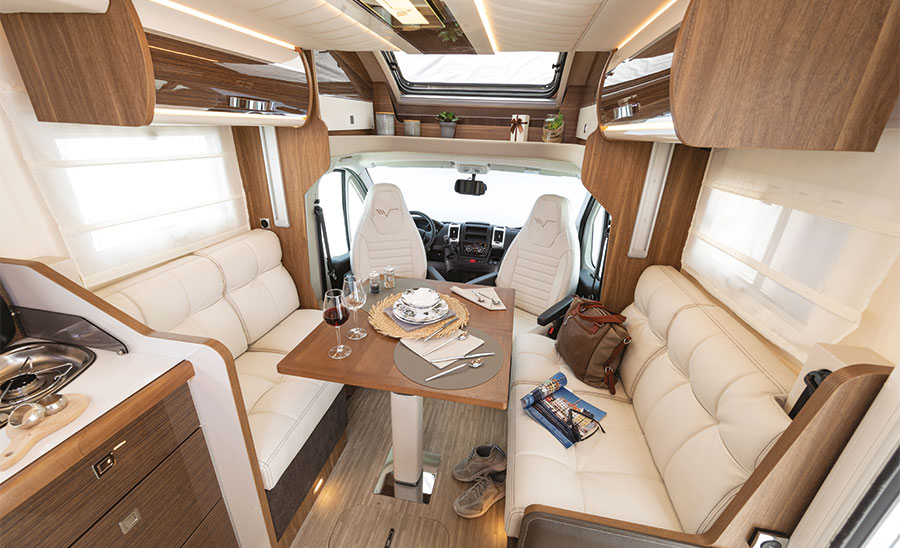 To complete the increasingly Kosmo range, Laika, the Italian manufacturer thatís now part of the Erwin Hymer Group, presented a new compact semi-integrated model, with reduced width (214 cm) and height (271 cm) available in lengths of 5.95m (V5) or 6.65m (V9). It does not have a drop down bed, so is only suitable for two people. Excluding its camper vans, this is the cheapest Laika model, available for less than € 45,000. 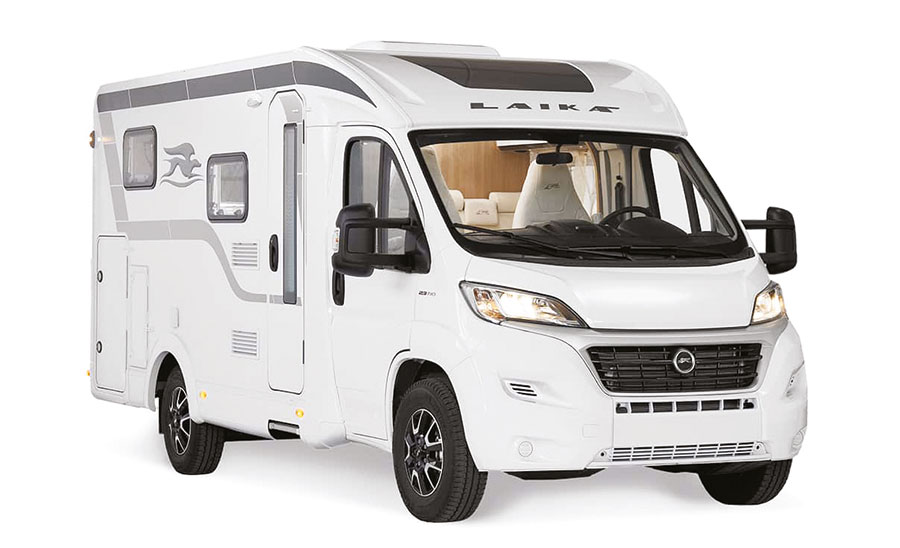 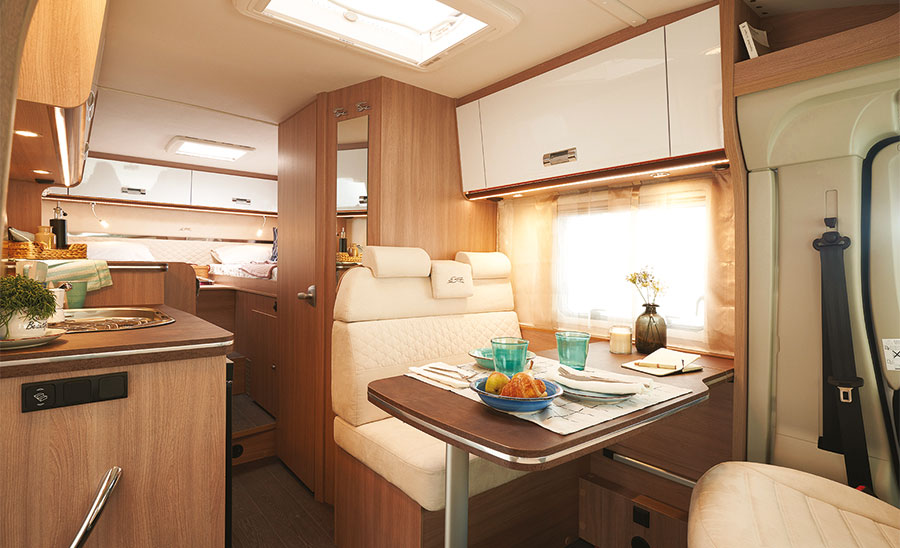 A “gas free” range from Roller Team, created by the Trigano Italia Research Center, was presented at Parma, using new technology called ‘TEC’ (“Total Energy Control”). Initially, it will be available with two models in its Zefiro range, the 265 TL and the 284 TL. On these campers, the gas system has been completely eliminated to encourage ‘energy independence’; useful in the winter season when consumption is greater and so users no longer have to keep refilling gas bottles. The lack of gas bottles also frees up space and saves weight. The on-board electronics manage the various utilities and systems to produce energy, such as the solar panel and the 150 W/h thermoelectric generator “Seeback effect” integrated with the AGM battery. A Truma Combi diesel stove was used for heating, while in the kitchen there is a 12V compressor fridge and a glass ceramic hob operating on diesel. 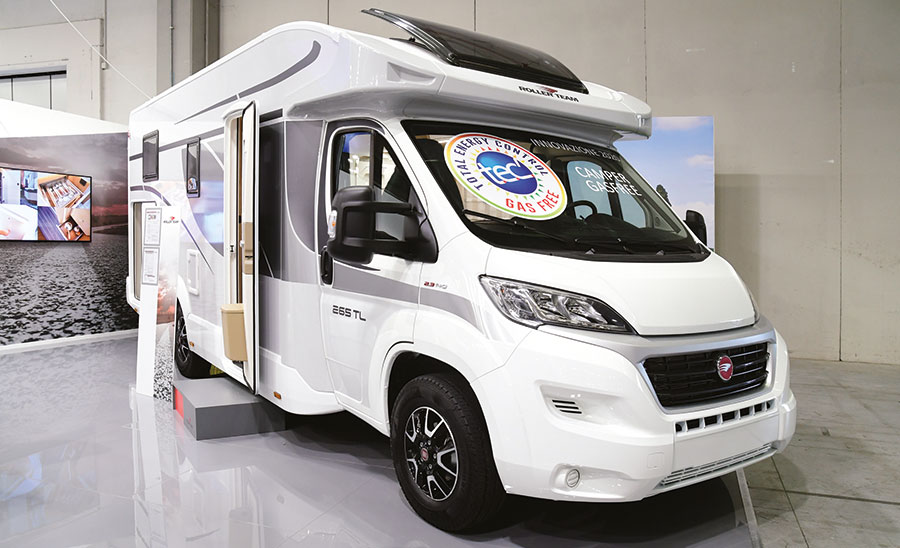 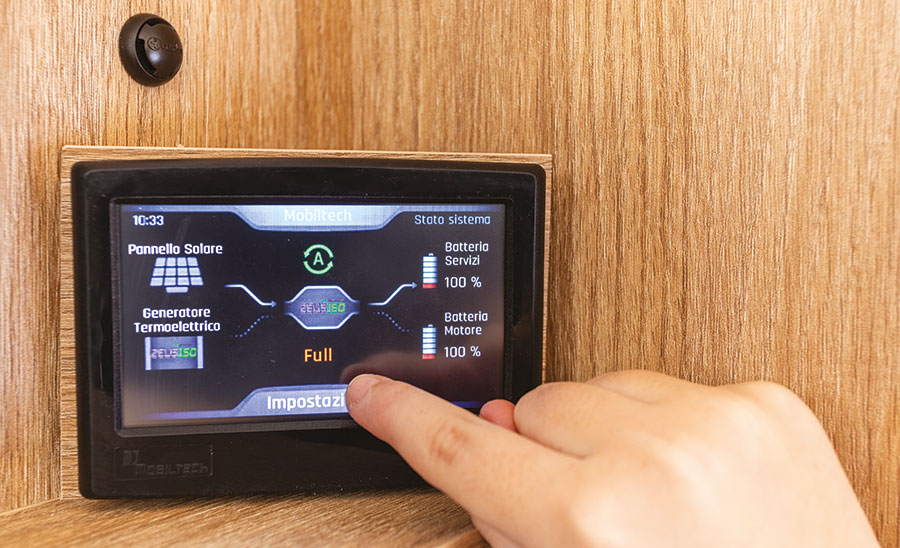 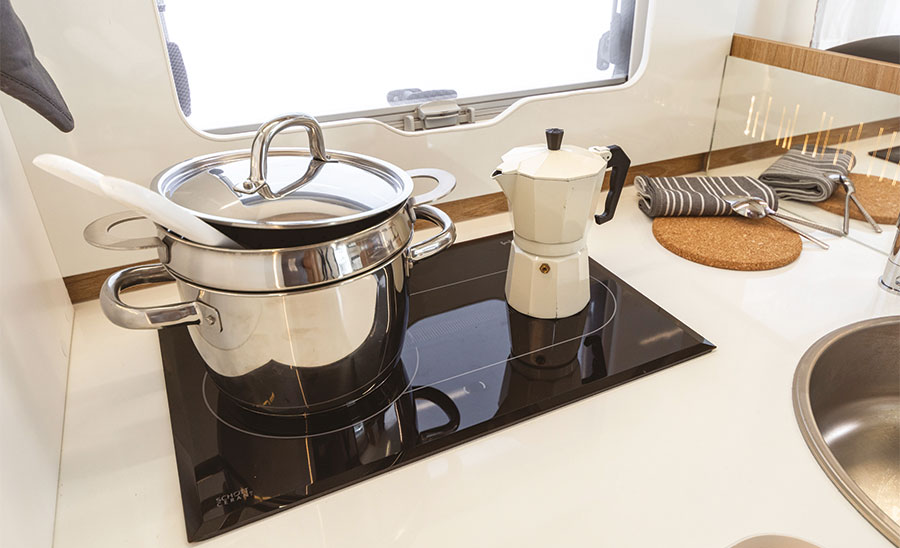 Elnagh and Rimor are historic Italian brands (now owned by the Trigano group), which have several overcab models at the Parma show. Elnagh has updated its entry-level Baron series, while Rimor has added to the already known Seal, with the renewed SuperBrig and the new Evo models. 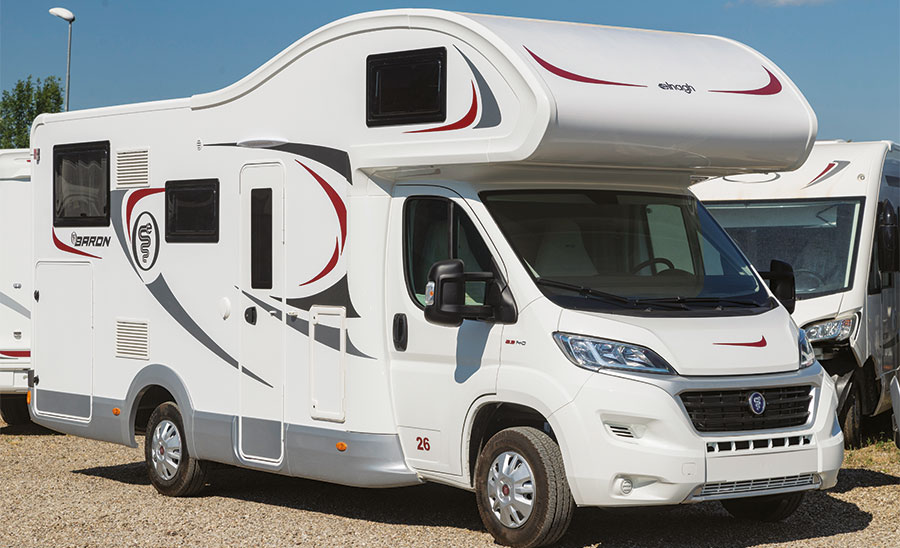 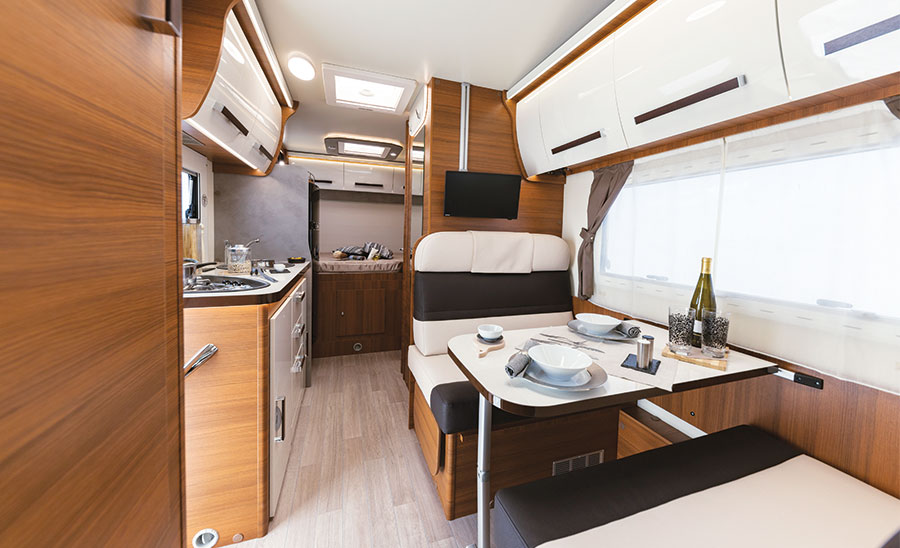 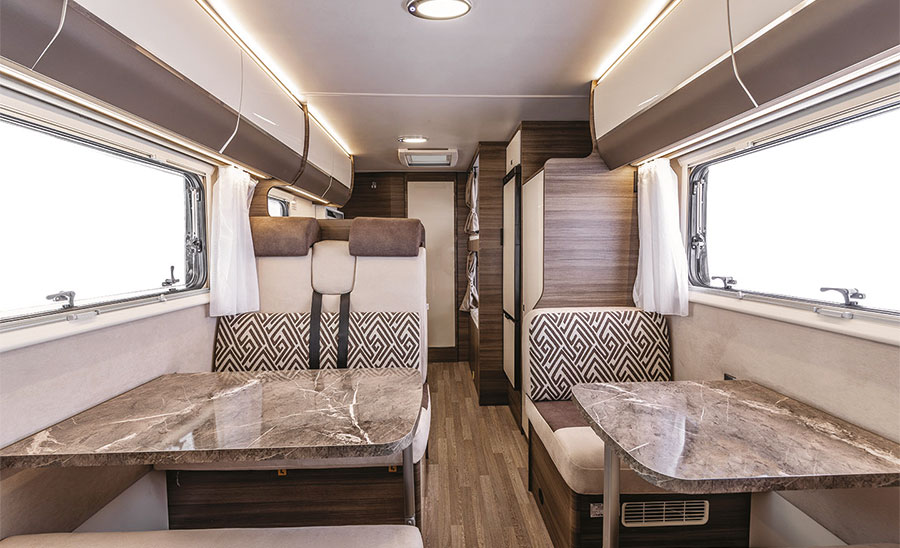 Arca, another historic Italian brand, and one of the more elite brands of the Trigano group, is purely focused on the domestic market. It has a range of motorhomes, with overcab and semi-integrated models: all characterized by a strong external design, with a monobloc rear wall and a remarkable construction technique, in particular, using 43 mm walls covered in Alufiber. 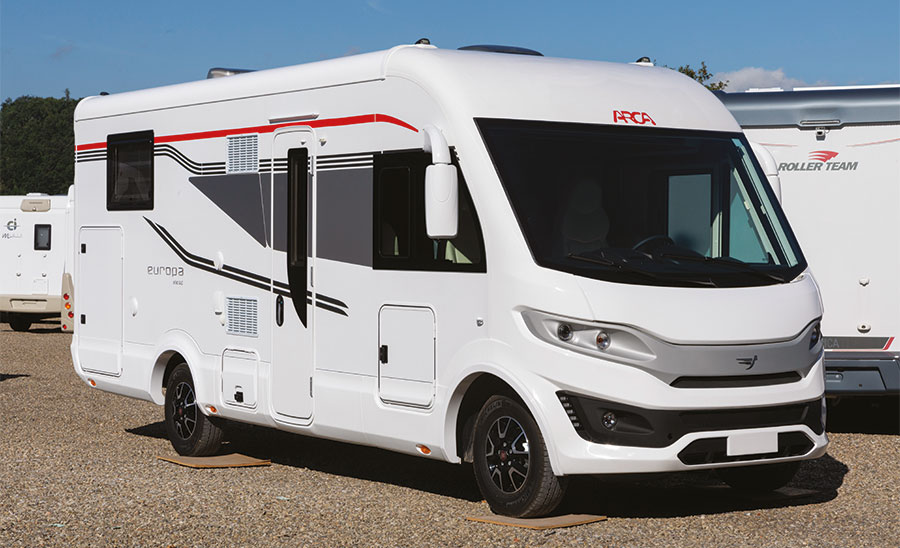