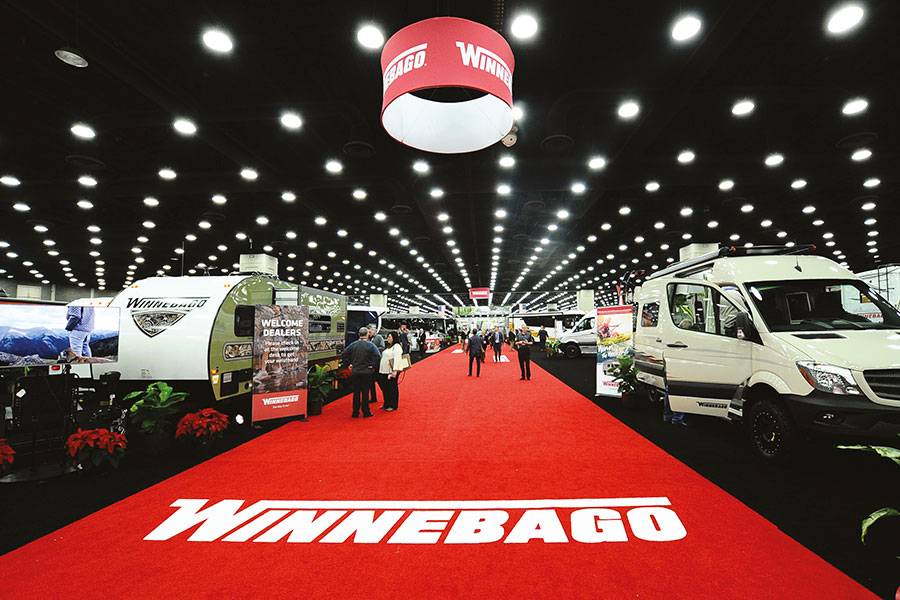 The 55th National RV Trade Show, took place at the end of November 2017 at the Kentucky Exposition Center in Louisville, KY. We have been there for the 3rd time and we collected some good stories and interviews.

The show featured over one million square feet of exhibit space filled with all the top manufacturer and supplier brands in the RV industry: over 300 exhibitor booths featuring products including Motorhomes Travel Trailers, Campers, Park Models, RV Parts & Accessories. Before going deep with numbers, we would like to summarize the different type of RVs in the US market. There are two main categories: motorhomes (motorized) and towables (towed behind the family car, van or pickup). Type A motorhomes are generally the largest; Type B motorhomes or van campers are the smallest, and Type C motorhomes generally fall in between. Types of towable RVs are folding camping trailers, expandable trailers, truck campers, conventional travel trailers and fifth-wheel travel trailers. Sports utility RVs (also sometimes called “toy haulers”), which feature a built-in garage for hauling cycles, ATVs or sports equipment, are available in both motorhomes and towable RVs.
There’s an RV for every taste and budget. Prices for new RVs are typically $6,000-$22,000for folding camping trailers; $6,000-$55,000 for truck campers; $8,000-$95,000 for conventional travel trailers; $18,000-$160,000 for fifth wheel trailers; $43,000-$200,000 for Type C motorhomes; $60,000-$130,000 for Type B motorhomes, and $60,000-$500,000 for Type A motorhomes.

The RV industry’s economic impact
There are more than 22,000 RV-related businesses in the U.S. with combined economic output of more than $27 billion. The RV industry employs more than 150,000 Americans. The RV industry has recovered from effects of the recession. RV shipments have risen each of the past seven years, reaching record levels in 2016. Shipments are projected to continue growing in 2017 and 2018. RVs are made by American companies employing American workers that are located in America. More than 60% of recreation vehicles are made in Elkhart County, Indiana. RVs Move America, the first-ever economic impact study of the recreation vehicle industry, revealed the RV industry contributed $49.7 billion to the U.S. economy in 2015, and provided 289,852 full-time jobs to American workers. “The study demonstrates that the RV industry is a dynamic part of the U.S. economy,” said Frank Hugelmeyer, president of the Recreation Vehicle Industry Association (RVIA), which commissioned the study. “American workers involved in our industry earned more than $15.8 billion in wages and benefits, and, along with the firms that employed them, paid $5.7 billion in federal, state and local business taxes.”

The ninth straight year of growth
The RV industry’s shipments will top a staggering half a million units in 2017 with expectations of 505,600 units shipped by the end of the year. This represents a 13% increase above the projected 2017 total of 445,700 units, according to a new forecast from RVIA. The forecast was prepared by RV industry analyst Dr. Richard Curtin and released by RVIA President Frank Hugelmeyer at Outlook 2018, the all-industry breakfast program that kicked off the 55th National RV Trade Show.The market projection sees towable RVs ending 2017 at 444,100 units and then jumping to 455,200 units in 2018. Motorhome shipments will rise to 61,500 units in 2017 and then grow to 65,500 units in 2018. “In 2017, each and every month was the best on comparable record for shipments in that month. And, 6 of those months – March, May, June, August, September, and October – recorded the highest monthly totals we’ve ever measured. October alone marks the highest monthly shipment totals we have ever seen at 48,926 units.” said RVIA President Frank Hugelmeyer. “These historic shipment totals mark the ninth straight year of growth and represents an incredible rise of more than over the market bottom in 2009”.

The Go RVing experience
Go RVing celebrated 20 years of success at the National RV Trade Show. The RV industry’s national advertising and marketing communications campaign consists of RV manufacturers, component suppliers, dealers and campgrounds, and works to provide the public and media with general information about the benefits of RV travel and camping. The campaign launched in 1997 with the aim of boosting RV sales that were hovering around 250,000 units per year. Two decades later, and Go RVing is still going and celebrating 20 years of promoting the RV dreamlife and looking forward to record high 2017 shipment estimates of more than 505,000 units. The campaign achieved more than 56 billion impressions over the last 20 years “Go RVing has been a great collaborative effort by the industry and a campaign that’s admired by other industries,” said Karen Redfern, RVIA’s vice president, brand marketing and communications. “We were able to get competitors to band together for the good of the entire industry and keep them together.” From its beginnings to now, Go RVing has evolved. Themes have changed from “Wherever You Go, You’re Always at Home,” to the current tagline, “Find Your Away,” and marketing efforts have become more multi-faceted incorporating digital, social and event-driven elements. What’s stayed the same: the collaboration. Co-chair of the Go RVing Coalition, Bob Wheeler said, “Go RVing is positioning itself to be the consumer data and market trends leader for the industry, and we have three major Go RVing research projects underway that we will unveil later in the spring. This research will help us understand the American millennial consumer and their perceptions about owning and using RVs, as well as market and consumer trends impacting their behavior.” Dan Pearson, co-chair of the Go RVing Coalition explained the importance of providing opportunities for people to experience RVs in unexpected places. “Research, data and numbers are all great, but we also know we connect best with consumers when they can see, feel and touch an RV. That is exactly why Go RVing has brought RVs to hundreds of major consumer events where they never would have expected to see one. Over the past six years, more than a half million consumers have been introduced to RVs at Go RVing events. Over 150,000 this year alone.” Chairman of the RVIA Public Relations Committee, Chad Reece said “From advertising, to experiential marketing, to our PR efforts, the Go RVing program literally brings the RV lifestyle to life for consumers. So be proud – and I hope you’ll join me in continuing to support this all-industry endeavor. Here’s to 20 more years!”

The Recreation Vehicle Industry Association (RVIA) prepared a document with the RV business indicator and explains why the market is growing so big. Here are some reasons.

• RVs support a balanced and active lifestyle. In a Harris Interactive survey, owners reported that RV travel enables them to experience nature and outdoor activities and enjoy quality family time. RVers reported stronger bonds with loved ones and benefits to children. RVers also cited healthier eating on the road, sleeping their own beds, and having their own bathroom facilities as advantages of RV travel.

• RV ownership and travel is a great value. A 2014 Vacation Cost Comparison prepared by PKF Consulting USA showed that a family of four can save 27-62% on vacation costs by traveling in an RV, even when factoring in ownership costs and fuel. For a two-person traveling party, savings are 11-48%. Even when fuel prices rise, more than 80% of RV owners say their RV vacations cost less than other forms of travel.

• RVs have uses as diverse as the people who own them. In addition to vacation travel, owners use RVs for tailgating, travel with pets, business, outdoor sports and other leisure activities. Ownership growth is strongest among the Millennial generation.

• Shorter trips closer to home. Research shows that RVers spend more time enjoying campgrounds and less on the road to save fuel and time. More than 90% of RVers take three or more mini-vacations per year. With more than 18,000 campgrounds nationwide, it’s easy for RVers to stay closer to home.

• IRS tax deduction. For most RV buyers, interest on their loan is deductible as second home mortgage interest.

• RV manufacturers are offering innovative new products that offer an optimal mix of size, amenities and price for today’s budget-conscious consumers. Manufacturers are producing lightweight trailers and smaller, fuel-efficient motorhomes. Green technologies such as solar panels and energy efficient components are appearing on an increasing number of RV models.

• Go RVing ads build demand. The industry’s Go RVing advertising campaign continues to stoke consumer interest in RVs and the RVing lifestyle. The “AWAY” television and print ads are appearing on TV and in print, and Go RVing is partnering with music festivals and sports leagues to expand the campaign’s reach.

• RV ownership has reached record levels. More than nine million households now own an RV – the highest level ever recorded – a 16% increase since 2001 and a 64% gain since 1980.

• Baby boomers entering retirement. RV sales are expected to benefit as aging baby boomers continue to enter the age range in which RV ownership has been historically highest.

The new event elsewhere in the Spring of 2019

During the 2018 RV Leadership Conference, the RV Industry Association’s (RVIA) Board of Directors unanimously determined that a completely new approach was needed for the industry’s national event. Over the past decade, the Open House has firmly established itself as the premier buying event, while at the same time the National RV Trade Show has not successfully redefined its purpose. “It is clear the industry no longer needs multiple buying-focused shows, and the time to redefine RVIA’s event has come” – states the official RVIA press release – “We must act now to provide our vibrant and innovative industry a platform to promote its successes and celebrate its wins. The opportunity exists to deliver an all-industry event featuring expanded innovation and market development, unparalleled education and training, and enhanced focus on improving customer service. Our $50 billion industry deserves an event that celebrates industry achievement across all segments, and recognizes those companies and leaders who are innovating and moving the industry forward”. The new national industry gathering will include a shift in venue and timing, and will reveal the newest and most exciting products our industry has to offer. An event positioned earlier in the calendar year will kick off the RV selling season, creating a promotional platform to drive consumers to RV dealers nationwide. To support the creation of this new event, the Board of Directors unanimously directed RVIA to cease producing both the 2018 National RV Trade Show, and the 2019 RV Leadership Conference, to focus and combine all efforts on launching a single, new and fully reimagined event in the Spring of 2019. “The City of Louisville and the Kentucky Expo Center have been tremendous partners and friends to the RV industry, and RVIA and all our members would like to thank them for their decades-long support. We are forever grateful” – continues the press release – “The RV Industry Association is excited about launching this new event, and we will work closely with our board, members, dealers and industry partners, to ensure we maximize value for the entire RV industry”.