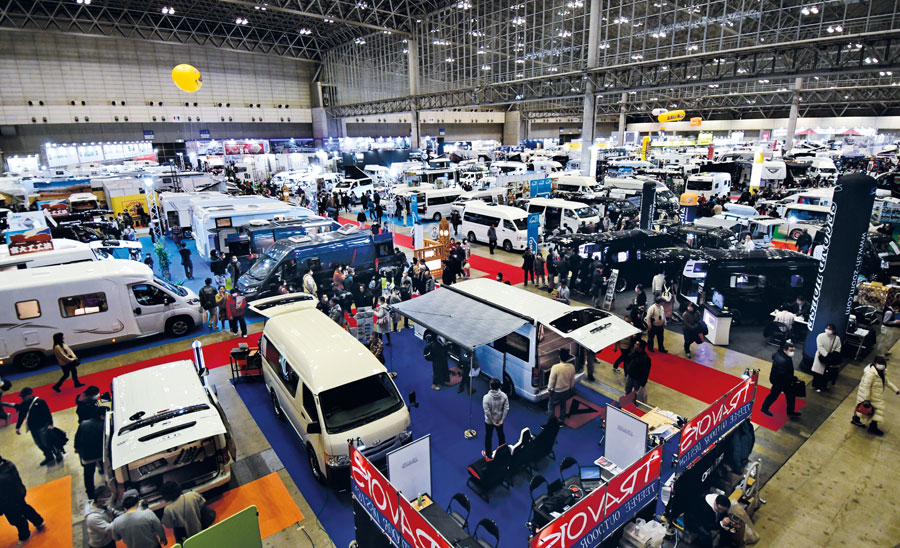 Aboutcamp BtoB reports about the Japanese RVing Industry. The vehicle segments differ in two key characteristics: the first is size, with the local vehicles tending to be smaller than their overseas counterparts; the second comes from the fact that base vehicles commonly used by US, EU or AUS builders are not introduced to Japan; thus local solutions are used.

Like many aspects of the Japanese enigma, the Japanese RVing Industry is one that has been hidden behind a vail created by distinctive market demands, unique base vehicles, limited interested from foreign manufactures and of course cultural and language barriers. In the meantime, the market and its manufacturers have been experiencing steadily growth while collectively working to educate the 126 million population about the joys of RV travel. With one of the most extensive public transportation systems in the world that counts delays in seconds and a work culture that for many years looked down on taking holidays due to the risk of inconveniencing co-workers with extra workloads, convincing the population to take extended vacations by driving long distances in an RV has been a tough sell. Nevertheless, with an aging population, which has been working and saving all their lives to enjoy retirement plus young adults, who no longer enshrined by the safety of lifetime employment are starting to reevaluate their life values, a significant increase of interest in domestic leisure activities has been developing and RVing is seen as one of these activities or a medium to comfortably get to the desired destination.

The Japan RV market
To put the market in a more figure-based perspective, the Japanese RV Association (JRVA) has existed for 26 years with the oldest of the 70 vehicle manufacturing members approaching or already celebrating their 30-year foundation anniversaries. The association and its members have grown from relatively obscure entities to ones that are getting more and more recognition from the mainstream media and the public. At the moment the association has 138 members split between vehicle manufacturers, dealers and parts suppliers. With a limited budget for large scale promotion activities, JRVA has focused on preparing and promoting the RVing lifestyle through the various end-user focused shows which take place at a neck-breaking pace in all the key cities around Japan starting with the Japan Camping Car Show hosted in first days of February at the Makuhari Messe in Tokyo Greater Area. The market figures for 2019 are still being analyzed by JRVA and will not be available till early summer; however, the total number of vehicles should tally up around the high 5,000 units across the segments. This will represent a modest increase in the figures compared to previous years. The number of vehicles registered in the field is roughly estimated at having surpassed 100,000 vehicles in 2019. Additionally, although predominantly made up of used vehicles, the domestic rental fleet enjoyed a year of growth reaching an approximately 800 vehicles nationwide. Looking a bit deeper into figures, it is important to point out that since most of the production in Japan is not to stock, but instead made to order. Thus the end-user lead-time figure is also key to understand the workings of the market. In the last 3-4 years, the industry average has crept up from 6 to around 10 months with some manufactures needing over a year to deliver. Therefore, one could conclude that the above production figure actually represent the domestic production capacity rather than end-customer demand. 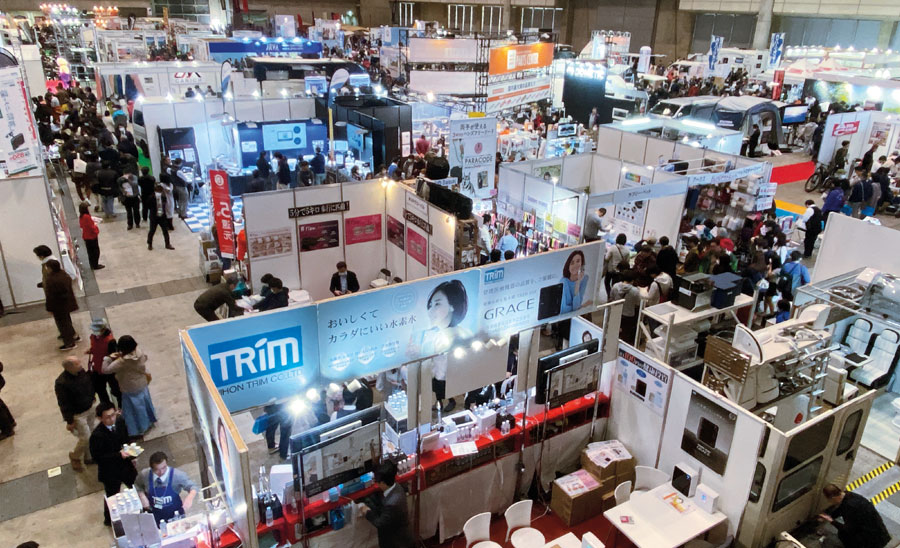 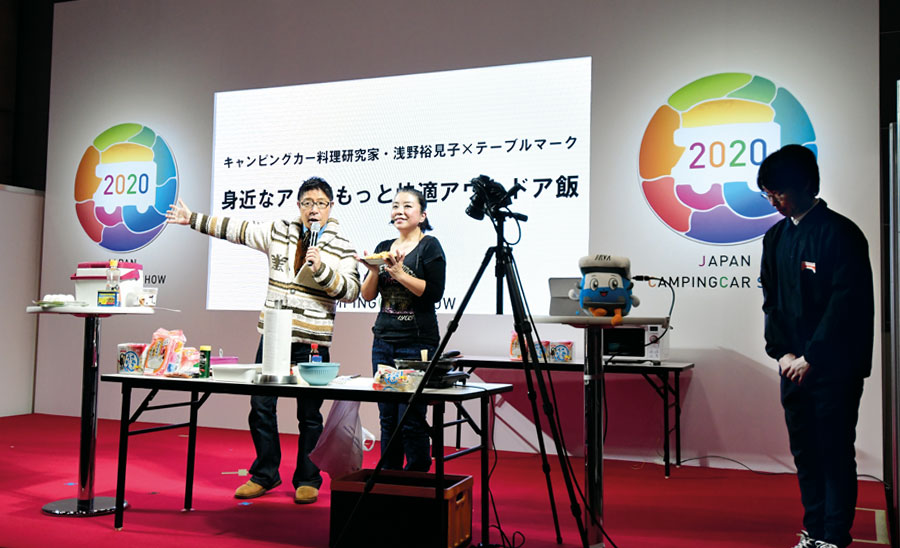 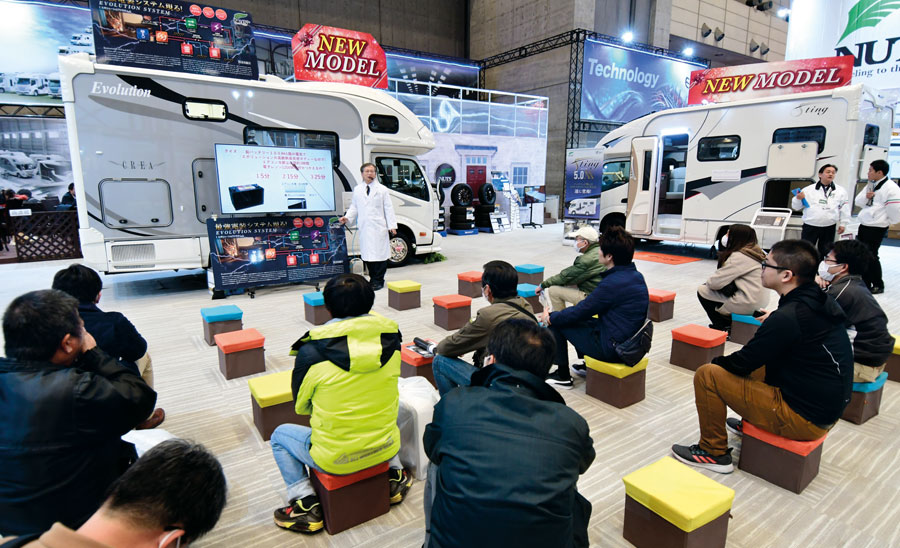 The Japan RVs
The vehicle segments, although in principal similar to other markets, when looked at in detail, differ in two key characteristics. The first is size, with the local vehicles tending to be smaller than their overseas counterparts. The second comes from the fact that base vehicles commonly used by US, EU or AUS builders are not introduced to Japan by the respective car manufacturers; thus local solutions are used. The locally manufactured RVs are riding on either Toyota, Nissan or Mazda commercial base vehicles. For the bus and full conversion segment, ranging in size 6.0 – 6.5 m and representing approximately 4-5% of the market, either the Toyota Coaster or Nissan Civilian are used. In the semi-conversion market, representing 30% of the market, with a typical length of 5.0 – 5.3m the Toyota Camroad dominates, but also the Nissan Elf, Mazda Bongo or Toyota Hi-Ace are utilized. The van conversion segment, with lengths ranging from 4.8 – 5.3m and representing 45% of the overall market is predominately built on the Toyota Hi-Ace with a small number of manufacturers opting for the Nissan NV200 Caravan. The last motor-vehicle based segment is a truly unique segment to Japan; the k-camper with max. length of 3.4m and width of 1.48, representing 15% of the overall market the segment is based on various vehicles from the k-car segment. With regards to trailers, Japan in general is not a “towing market” thus only 5% of the overall registrations are in this segment and predominately represented by EU imports. 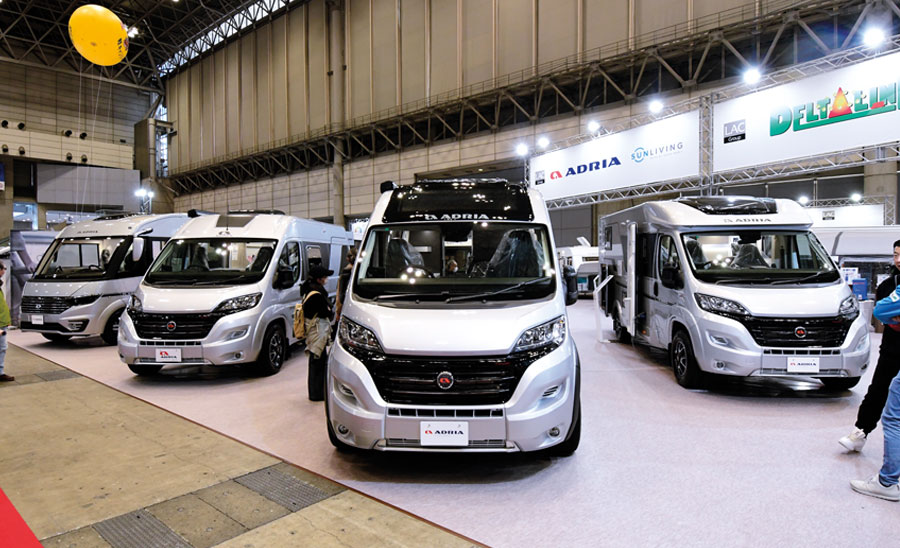 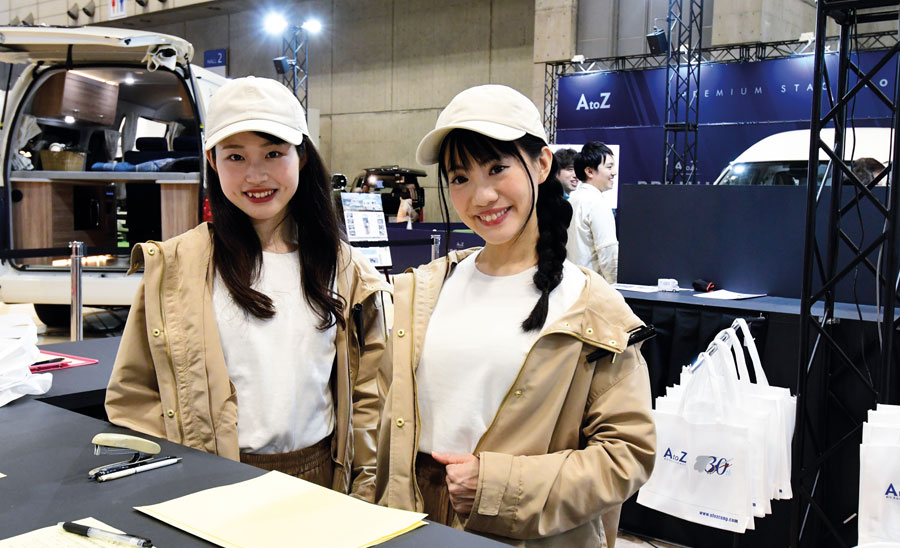 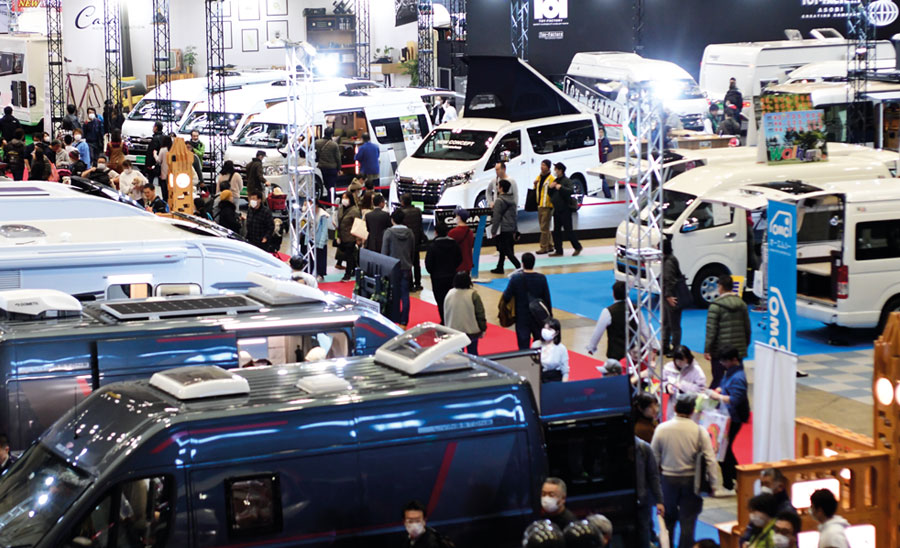 The future scenarios
The opinions per future prospects for the Japanese RVing can slightly vary depending on the people asked. Most larger manufactures are forecasting growth, however, taking into consideration the aging population with 28% being over 65, plus the long journey before the younger population will truly enjoy life in a “western balance,” one may say that the market is unlikely to expand significantly in the coming years. But as anything in Japan, the initial incubation periods for grand ideas to flourish take significantly longer than other countries, additionally, most Japanese have it in their nature to consider and point out the reasons why things may not happen or the obstacles one may face; further complexing those looking from outside. But Japan can surprise… as recently seen in the tourism sector, a flat market with limited growth registering as 33rd most visited nation with only 8.6 million visitors ten years ago, recently experienced unprecedented growth reaching 31.8 million in 2019. Hence taking this into consideration and looking at the population vs. the percentage of RVing owners in comparison to other RVing countries, Japan may surprise us all in the coming 10 years or so. The writers of this report sincerely hope that this article can contribute as a small catalyst towards this expansion and with that thought in mind, we invite you to enjoy the rest of this report. On Aboutcamp BtoB number 26 (June issue) we’ll go deeper into the manufacturing processes thanks to our visits to some factories. 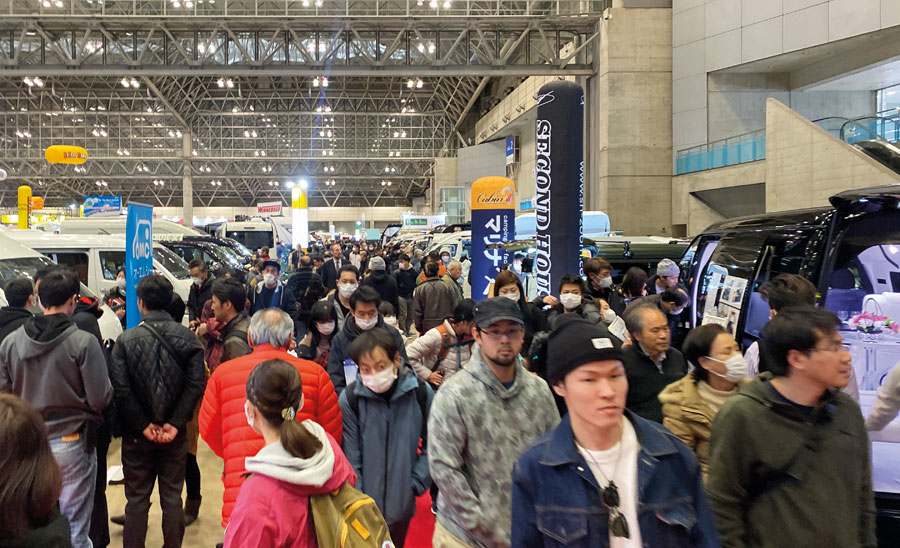 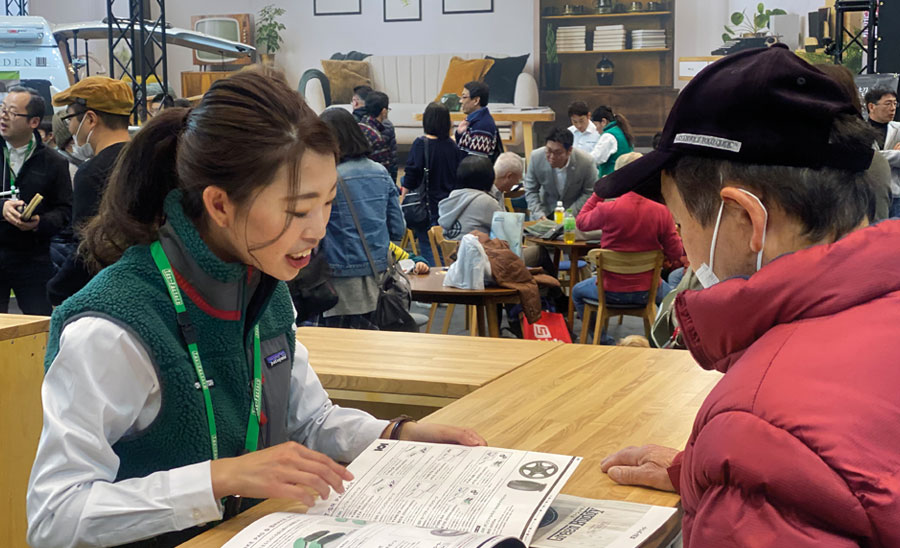 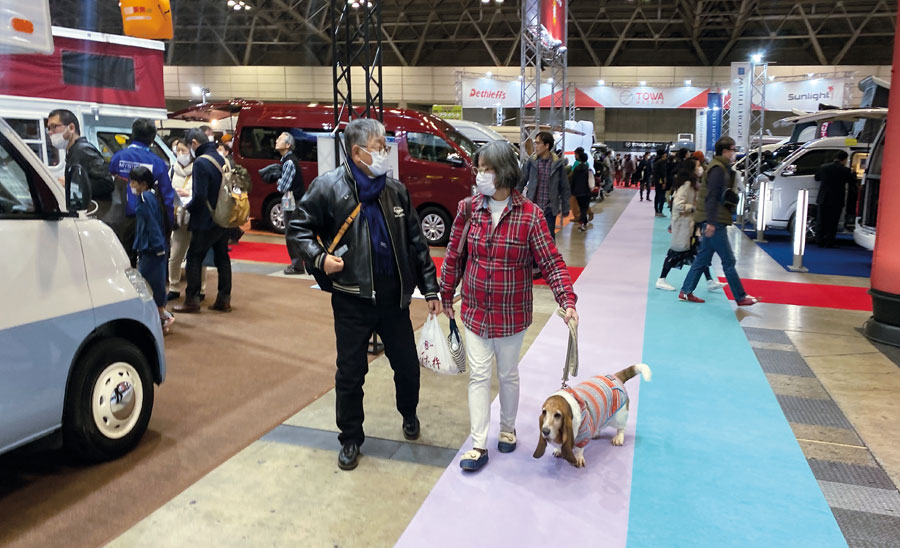 I live here now for few years and having experienced driving in various countries, am completely convinced that driving in Japan is quite easy. Various people who would like to come and travel in Japan by RVs seem to have big concerns about driving on the left side of the road or not being able to read the signs. Also concerns about getting lost and not being able to communicate with the locals seems as a point of concern, however, I must say that everything is very well organized with roads and signage in excellent conditions. In addition, as Japan is experiencing a big boom in turism, plus with the Olympics coming this summer, the Japanese government has made significant efforts to make everything accessible in English. Also these days, most rental companies offer bilingual navigations to ease getting around. Of course, Google and other services are fully bilingual. With Japan welcoming over 30 million tourists in 2019, there is an increase in repeat visitors who have already visited the must-see spots of first-time visitors and instead are seeking to deeper explore the Japanese countryside. This trend is very welcomed by the locals as it is helping to revive the countryside which is suffering from population decrease. In some cases, these adventures are being done with rental cars and an increase in RV rentals is also seen. The Japanese society is well known for politeness and this can also be experienced while driving. Japanese drivers typically keep a calm manner and i.e. merging lane maneuvers are done coolly with very little squeezing in the last moment. Once you merge, a double hazard light blink is the typical thank you. 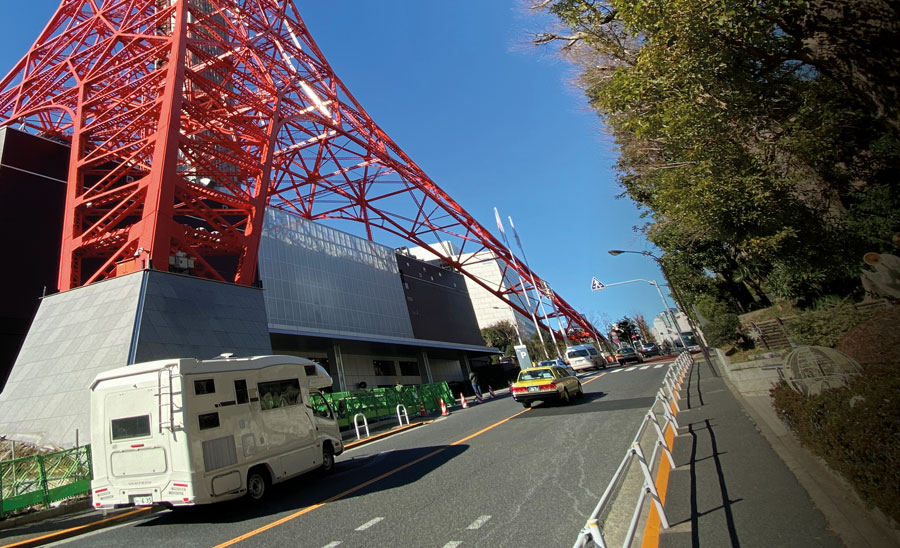 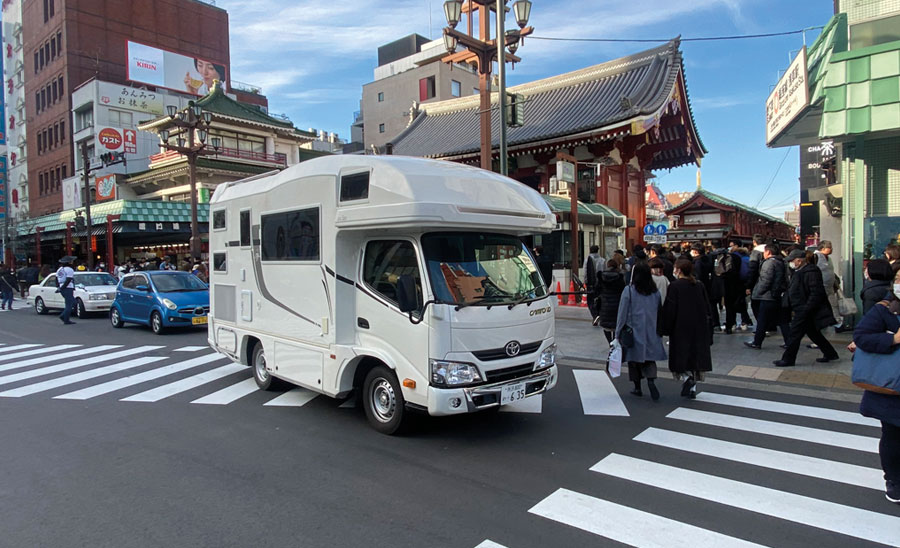 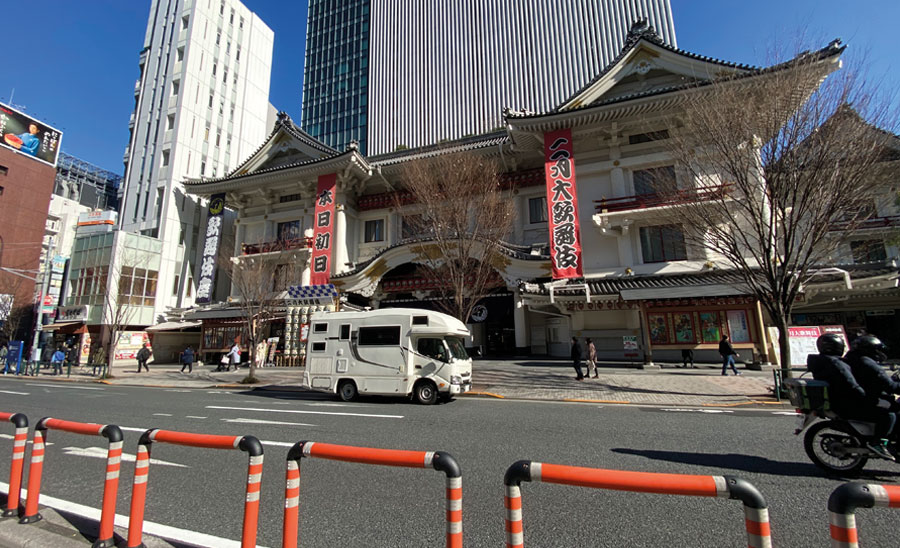 Even if one makes a mistake it is extremely unusual to hear honking. I often joke that you really don’t need a horn in Japan! Other factors that make driving here easy are the low speed limits (50 km/h on local roads and between 80 and 100 km/h on highways) plus the fact that 99.9% of all passenger cars and RVs have automatic transmissions. One thing to keep in mind when planning a trip is the fact that all highways are toll for all vehicles. These tolls can be paid individually at manned booths or electronically with the ETC (Electronic Toll Collection) System. Most rental agencies provide an option to rent this system with a dedicated credit card which allow hassle free travel and quick passage through toll gates. One issue that often comes up in RV discussion with the locals is parking. However, this is relating to a law in Japan that requires all vehicles in Japan to have a registered parking spot. This isn’t related to traveling with an RV, rather, to storing it. Without such a dedicated parking spot, the police will not issue the license plate for the vehicle registration. As many households in the large urban sprawls don’t have parking or at most parking for one; finding and renting a parking spot for your RV can be troublesome and of course expensive. Per the actual parking spots “around town;” they narrower if compared with the US ones, but vs. European city parking… Japan is much easier! An interesting tidbit; although there is no law nor regulation; Japanese drivers back their cars into parking spots to ease the departure. Thus, some practice before coming is recommended, but you can rest assured that all rental cars and RVs will be equipped with a back camera to aid you along. While traveling, there are plenty of parking facilities in and out the cities. Once you get into the countryside, you will be able to find an abundance of camping spots and also “Auto Camp Sites” which welcome tent and RV visitors. Furthermore, as Japan is basically crime free, a night or two on the beautiful beaches along one of the coasts will make for great memories.