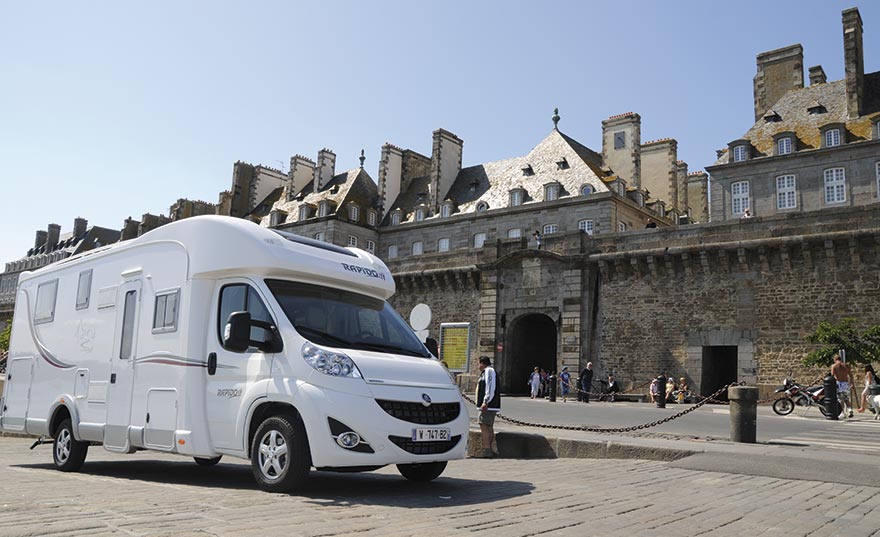 by Michel Vuillermoz
Journalist and contributor to CamperOnLine Magazine

Historically the land of low-profiles, which were popular there as far back as the early 1980s, France is now the second most important market in Europe. Recreational-vehicle customers are typically couples, often retired folk, who do not need many beds but favour a comfortable sleeping area and related services. Among the first to offer proper bedrooms, French vehicles cover nearly all types. Despite a dearth of overcabs, there are interesting designs for campervans and motorhomes, with models in all price brackets, from the most economical to the premium end.
French manufacturers have been credited with several innovations. Notable examples include the three-quarter-size longitudinal rear bed, very popular in the 1990s and sometimes known as a “French bed”, and the main front lounge and viewing area with semi-dinette and facing small couch. That helped both to improve amenities for passengers on the move, by moving them forward, and to increase the amount of accommodation available when parked, by turning around the cabin seats. A somewhat traditional market, France has seen a clear trend in recent years towards exploiting the rear sleeping area, with master bedrooms and central double bed served by a double nightstand and wardrobes. The toilet and shower areas are very important, often reflecting the vehicles’ long-distance use, while a particularly roomy living area seems less necessary and is often not convertible into a bed.
Under their legal system, French citizens holding a type-B driving licence before 1 January 1975 can also drive recreational vehicles weighing over 3.5 tons. Introduced in 2009, the relevant law gave the green light to a new generation of large vehicles – of at least 8 metres in length – at the medium/high end of the market, constructed to exploit the combination of the Fiat Ducato and the AL-KO chassis to the full. At the other end of the scale, the French also look for compactness, in both low-profile vehicles and motorhomes. Yet while the low-profiles have also abandoned the classic foldaway bed (replacing it with the now highly popular drop-down bed) in favour of layouts split between main front living areas and rear service areas, the motorhomes tend to retain layouts that are more traditional. That is what the customers demand; they are very attached to tradition and generally stay loyal to their favourite make when they replace their vehicle. Given customers’ conservative tastes, it is amazing how the manufacturers incessantly innovate and refresh the layouts, with new features every season to continually enrich an already broad and varied offering. 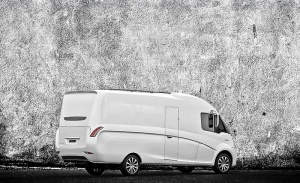 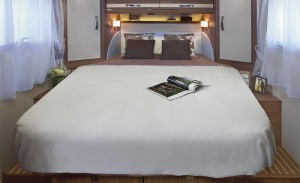 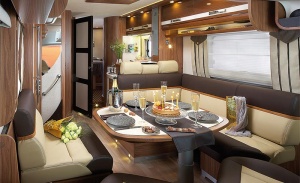 Indeed, as we have mentioned, France has become the home of the rear central bed – a layout devised almost exclusively for couples, one that demands considerable space, nearly always of around 750 cm in length. To offer models that are more compact, the manufacturers have looked to other solutions. Often, they have reduced the toilet space and eased the bed slightly aside to accommodate the classic shower cubicle / wardrobe at the rear. Fleurette has an interesting design in the Florium Mayflower 70 LMX, which manages to squeeze the classic “lit central” layout into less than 7 metres.
France, though, is also the land of budget motorhomes, created (or, rather, recreated) through names like Itineo and Moovéo. This type of model is continually growing in popularity, as a great many manufacturers belonging to different groups fight it out in a price bracket competing directly with the low-profiles, thus immediately bridging the economic gap that had always set motorhomes apart. Dedicated to those who love a panoramic view on the move and a vehicle that is straightforward to operate, the budget motorhomes are currently the real test bed not only for the different marques but also for the industrial groups themselves, featuring all the main competitors: Adria (Sonic Axess), Autostar (Axea), Bavaria (Arctic), Benimar (Aristeo), Buerstner (Viseo), Challenger (Sirius), Chausson (Exaltis), CI (Mizar), Itineo, McLouis (Nevis), Moovéo, Pilote (Aventura), Rapido (Serie 8), and RollerTeam (Pegaso). The commonest layout, of course, involves a rear central double bed. It has made an appearance even on a campervan (the Font Vendome Plaisance). And campervans themselves are growing in popularity, thanks partly to the offerings of generalist marques and partly to some of the sector’s premier specialists, such as Font Vendome and Campéreve.
As for the materials, the French mainly use external profiles made of fibreglass to cover the shell on entry-level and top-of-the-range vehicles alike. Worthy of note, fibreglass-wise, is the coup from specialists 3C Cartier – their new Atalante motorhome leads the way in combining latest-generation materials and automotive design with the size of a recreational vehicle. A highly rated basic vehicle is the Mercedes-Benz Sprinter, which is used for the flagship models of many constructors (e.g. Pilote, Bavaria, LeVoyageur, Rapido and Notin).