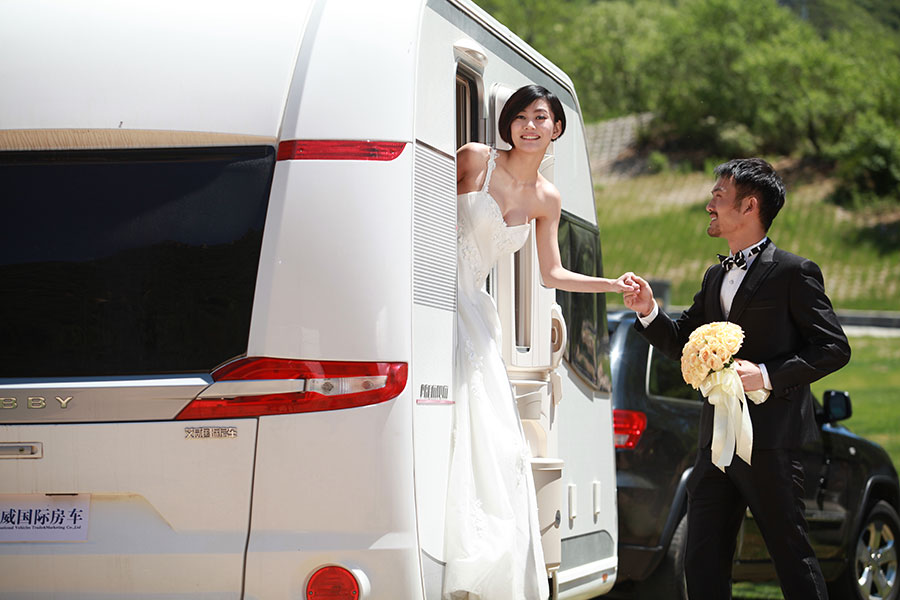 Chinese market is ready… but it has not taken off yet

We have been to the sixth edition of All in CARAVANING, the trade fair dedicated to motorhomes and caravans organized in June by Düsseldorf Messe in Beijing. Here you find the opinions and standpoints of the industry leaders we met at the event.

We attended All in CARAVANING 2017 from 23 to 25 June at Beijing Exhibition Center, the sixth edition of the trade fair organized by the Caravan Salon of Düsseldorf. It was our first time there and it was definitely a very interesting experience. Just over a decade ago, in China even the motorhome idea did not exist. Then the habits of Chinese people have changed hand in hand with economic prosperity and a little more free time for themselves: many thought that this country could become the second largest market in the world for recreational vehicles. First of all Americans, who went to China to export their technology. Eventually, European succeeded because the law provides that car licenses allow driving a motorhome up to 6 meters. Many Chinese came to Europe to study our motorhomes and caravans. And some European engineers went to China to teach how to build recreational vehicles that would not break into pieces or fill with water during a storm. As a result, is almost a hundred camper-manufacturers were established in China, although the market still seems to feature a few thousand units per year. Europeans, on the other hand, are ready for the future and likely explosion of registrations and many manufacturers have long been present on-site with their products, such as, for example Dethleffs, Hobby, Fendt, Adria, PLA. What is most surprising are the figures involved: nobody knows exactly how many recreational vehicles are actually sold in China. Or better, statistics proposed as official and processed by 21rv – 2016-2022 Chinese Rv Industry Analytical & Market In-depth Research Report indicate that almost 12,000 units were sold in 2016 with an increase of 35% compared to the previous year. As you will infer from this article, we preferred to learn about this market from those who know it far more better than us and few agree with these numbers. Some indicate the registrations between 4000 and 5000 units, other even below 3000. Perhaps the latter figure is the most credible. As to growth estimates, the report drawn up by the same source shows really extraordinary figures with registrations development of +328% over the next 4 years. Whatever the numbers, the market is definitely ready to take off. And not just for the presence of several Chinese motorhome manufacturers, European products importers (but even American and Australian), but also for the components sector. Among the exhibitors, we found many Western brands: Dometic, Truma, Eberspächer, Thetford, Thule, Voehringer, Lamilux, Brianza Plastica, FAP, Fiamma, Teleco. But we have discovered that the Chinese are even ready to build an almost 100% made in China motorhome. The heating system and toilet are still missing, but everything else is there: engines and chassis, fiberglass laminate panels, furniture panels, removable steps, glass and methacrylate windows, cabin door, refrigerators, seats and even slide out systems quite similar to those produced by Lippert Components. But let’s see how Chinese camper actually are. They are short, within 6 meters, but in many cases the American influence can be seen because they are equipped with slide out walls that significantly widen their habitability. We find vans, overcab and low profile models, but not yet motorhomes. In recent years, many manufacturers and improbable builders with poor quality products appeared on the market along with huge automative companies manufacturing cars, trucks, commercial vehicles and even motorhomes. Real giants capable of launching considerable productions in short time, if the market were to request it. Among them, it is worth mentioning Brilliance, a group estblished barely a decade ago, which today produces also for BMW China and has 35,000 employees. Brilliance passenger car has become the leader among the self-developed, upper-market brands as regards market share in China. The sales capacity of Jinbei Haise minibus has exceeded 1,000,000 units, with more than 50% market share. Jinbei Iight truck is ranked at 4th place, and its market share has reached 12%. Great Wall Motor Company Ltd, China’s largest SUV and pickup manufacturer, with over 30 holding subsidiaries, more than 60,000 employees, four vehicle bases manufacturing. About 15 years ago, Great Wall was the first company in China to produce a motorhome line mounted on a pick up chassis. Dongfeng Motor Corporation is one of the 5 major China groups and produces about 4 million vehicles per year: cars but also buses, industrial vehicles, commercial vehicles and motorhomes. It also manufactures vehicles used by several motorhome builders in China. Another colossus that manufactures also motorhomes is Saic Motor Corporation Ltd, the largest car company in the China’s A-share market. SAIC Motor’s car sales hit 6.489 million units in 2016. The organizers are very satisfied with this trade fair edition and have announced notable numbers: 21,826 visitors from China and abroad came to the trade fair, ie a 25% increase compared to previous year. 33,000 square meters of indoor and outdoor space, 10 exhibition halls (two extra halls compared to last year) and 650 exhibitors (of whom 330 were campsite exhibitors). Many exhibitors who were interviewed, agreed that this would become the second largest market in the world. So, let’s listen to them, managers and entrepreneurs that we met at the pavilions of the trade fair.

Jiangsu Zhongyi Auto Co.,Ltd.
Jiangsu Zhongyi Automobile Co., Ltd. is located in Nanjing Lishui Economic Development Zone, covers an area of more than 100 acres. The current annual production capacity of special vehicles has reached more than 5,000 vehicles. The company produces more than 200 kinds of special vehicle. In the picture: 2017 Passport Tourists (5980 x 2315 x 3200 mm) on the Saic LDV V80 chassis with a slide out in the rear part. 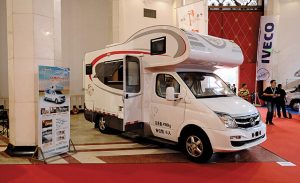 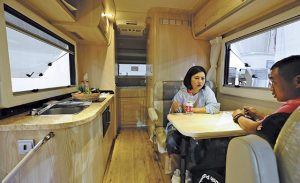 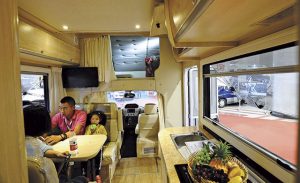 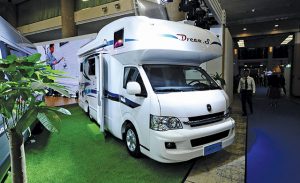 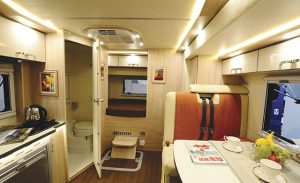 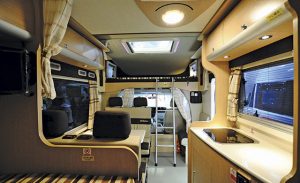 Saic-Maxus
SAIC Motor Corporation Limited (SAIC Motor) is the largest auto company on China’s A-share market and covers the production of both passenger cars and commercial vehicles. SAIC Motor’s car sales hit 6.489 million units in 2016. It produces the 2.5-liter turbocharged gasoline engine LDV 80 commercial vehicle marketed under the Maxus brand. In the picture: a motorhome on on the Saic LDV V80 chassis. 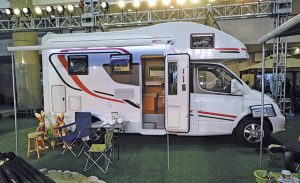 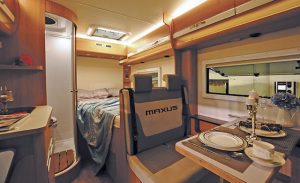 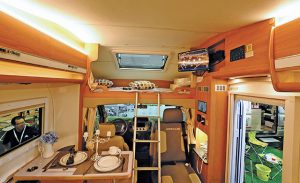 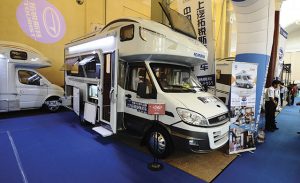 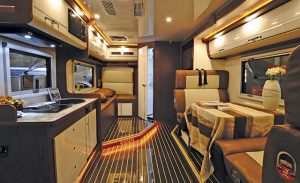 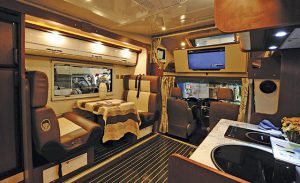 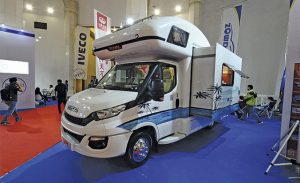 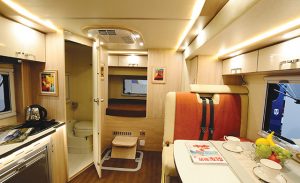 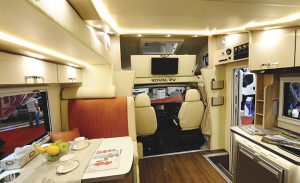 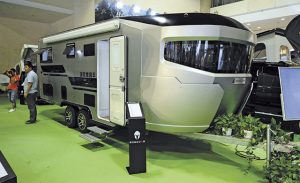 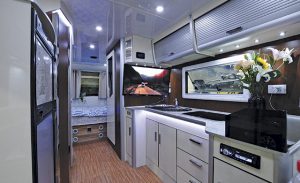 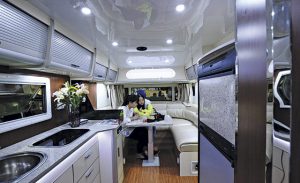 Luoyang Loncen Caravan Co., Ltd
Located at Luolong district Luo Yang city. The company covers an area of 40000 square meters. Loncen caravans were designed and produced by German team with Germany’s most developed technology and spirit of the craftsman. 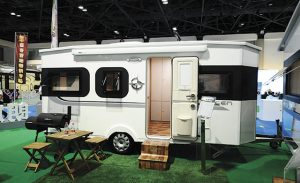 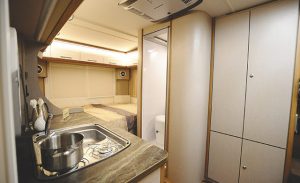 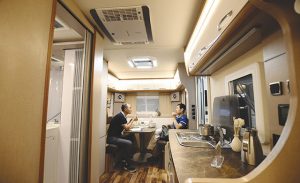 Jiangsu Jinghang Automobile Co.,Ltd.
Jiangsu Jinghang Automobile Co., Ltd. is a manufacturing enterprise specialized in the R & D and production of special vehicles. It is located in the center of Jiangsu-Zhejiang-Shanghai region and covers an area of 34,000 square meters. In the picture: WH591-I (5950 x 2300 x 3150 mm) on the Iveco basis with slide out. 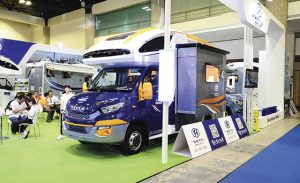 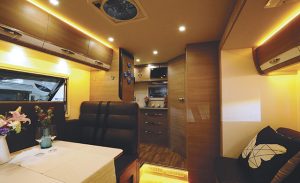 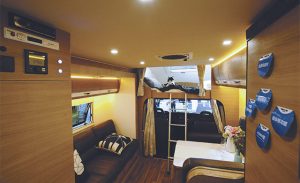