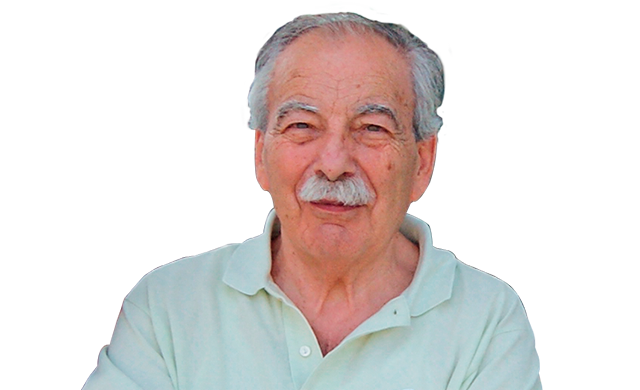 Face to face with Pierluigi Alinari, who tells us about his long career in the RV sector.

We met Pierluigi Alinari, the founder of the PLA Camper motorhome brand, and others, who is considered to be one of the pioneers of the European RV sector. He started as a supplier to the caravan sector in 1970, then in the early 1980’s took over the UK brand, Caravans International. He also took part in the founding of the Mc-Louis brand and two others: Joint Camping Car and Dream Motorcaravan. He started another new motorhome company, PLA, in 2010, and in 2014 he bought Giottiline motorhomes. In 2016, he sold the majority stake of his company to the Rapido Group.

Aboutcamp BtoB: Mr Alinari, let’s start with the most recent event in your career; why did you sell the PLA motorhome brand to the Rapido Group?
Pierluigi Alinari: At 83 years of age, one begins to get tired, and in my company, along with my wife Graziella, everything was still on my shoulders. I began to think about who to leave this enterprise to and had meetings with the Rousseau family, who showed interest. It then took about a year to identify a manager who could take over the leadership of the two brands, however, I remain the owner of 30 per cent of PLA and Giottiline until 2019.

Aboutcamp BtoB: Tell us about your business history.

Pierluigi Alinari: In the early 1980’s I worked in the caravan sector as a supplier, mainly for the Italian caravan manufacturer, Roller. I was also a keen traveler, first with caravans and then campers, and made several trips, including some very special ones, such as to Nepal and Afghanistan. We built walls and floors and wooden components for recreational vehicles, and business was going very well, so much so that we built a factory to assemble our furniture right next to our best customer, Roller. However, then there was an economic crisis, the work collapsed and I found myself having to make difficult choices, including the dismissal of my employees. The only customer of our who was solvent one was the English brand, Caravans International, which had offices and a production facility in Italy. When Caravans International was no longer able to pay us, it offered me the opportunity to buy the company. The models in production were not very attractive for the Italian market, so I created a model of caravan that I called ZERO. It was cheap and I was successful. And the year after I introduced a camper. Again, people liked it.

Aboutcamp BtoB: When and why did you decide to sell Caravans International?

Pierluigi Alinari: In 1996 I realized that I could no longer manage such a large company with about 230 employees by myself, so I accepted an offer from the Schroders banking company and sold 67 per cent of Caravans International shares. I was joined by a manager with whom I could not get along, so I asked to leave. Schroders was not in favour of this, but then in 1999 they liquidated my shares, and sold the brand to Trigano.

Aboutcamp BtoB: Then came the era of McLouis motorhomes.

Pierluigi Alinari: That’s correct. I had a non-competition agreement with Trigano, so I suggested to my wife that we create a series of campers for hire, and the McLouis brand was born, but after three days the dealers asked us to produce them for sale and not just for hire. At the first exhibition we took the McLouis vehicles to, we received orders for 2,000 vehicles.

Aboutcamp BtoB: Why did you decide to sell the brand to the Sea Group two years later.
Pierluigi Alinari: I did not want to sell, but Trigano sued me, my wife and our associates claiming that we had broken the non-competition agreement, so I joined the Sea Group company and the case was stopped; however, I was not allowed to work for McLouis, so I decided to invent a new brand.

Aboutcamp BtoB: The Spanish brand Joint Camping Car, correct?
Pierluigi Alinari: Yes. I met the former director of Moncayo motorhomes and decided that it could be done: going to Spain to produce motorhomes in a country that also had great potential for growth. In a very short time we built a company in a remote territory which looked like it was from a western film. The Sea Group wanted to be a 50 per cent member of my new business venture, and after two years they asked to buy 100 per cent of Joint Camping Cars.

Aboutcamp BtoB: You also held the position of Vice President of the Sea Group. What was your operational role in that group?
Pierluigi Alinari: I had a lot of responsibility, and it was not easy to manage a complex business machine like the Sea Group during those years. I was not comfortable with it because I could not intervene to sort out situations I did not like. At the Milan office, I dealt with the Mobilvetta brand, then Elnagh, and in 2003, I launched Dream Motorcaravans.

Aboutcamp BtoB: We remember Dream, a brand with interesting construction features.
Pierluigi Alinari: Yes, it is the project I am most proud of. It took three years of study and more than a million in investment in research and development. The project was based on great innovation in the production process of the bodies, which were made with injection moldings in five sections, then assembled in a single shell called ‘Monoshell’. The external covering was in fiberglass, and the insulation was made of polyurethane foam injected by an industrial process that eliminated the unpredicatability of artisan assembly. Equally new was the system of furniture construction that allowed us to have curved doors using an unprecedented process without joints but with sustainable costs.

Aboutcamp BtoB: And then came the era of PLA.
Pierluigi Alinari: I left the Sea Group in 2005 and in 2006 my wife Graziella also left. I stopped for five years, and told myself to think, plan and look. Then, in 2010, I launched the PLA brand at the worst moment when the crisis in the market for motorhomes in Italy was deep. It was tiring; the banks no longer gave funding to companies in the caravanning sector and I had to face the new adventure with only my resources. For some years the company operated at a loss, but then we managed to get it on the right tracks.

Aboutcamp BtoB: Why, when you already had your commitment with PLA, did you decide to buy Giottiline?
Pierluigi Alinari: Giottiline sued us by declaring that one of our engineers, who had also worked for them, had copied projects. In 2015, we won the case and then decided to buy the company, so a new challenge awaited me. But age sets its standards and a time comes when it is appropriate to leave the helm for others to look after. It took us more than a year to identify Ing. Giuseppe Pinto to replace me looking after the two brands. I am glad that my companies are in the hands of the Rousseau family, passionate and capable entrepreneurs, able to guarantee a future and development of the brand that bears my name: PLA = PierLuigi Alinari.