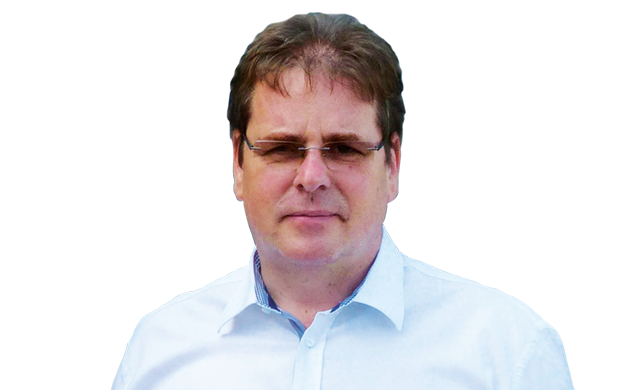 The pioneer in the European campervan market

The campervan market has exploded and currently accounts for over 50 percent of all motorhomes sold. The Pössl Group produced approximately 15,000 vehicles in 2021. Aboutcamp BtoB met Managing Director Markus Wahl to talk about this rapid development

Pössl Freizeit und Sport GmbH was founded in 1989 by Peter Pössl with the philosophy of marketing inexpensively equipped campervans. The idea was brilliant but too early for the market at that time. In 2002, Peter Pössl sold his company to the Munich-based Glück Group, which was already Pössl’s trading partner at the time. With the takeover, the Pössl brand really took off with annually increased production figures. Markus Wahl was and still is the managing director. In 2004, the leisure vehicle manufacturer Dethleffs was acquired as a production partner. Previously, Pössl campervans were produced by the Slovenian manufacturer Adria. Production rose from a few hundred units to almost 2,000 vehicles in a short time. Since 2017, vehicles have also been built in-house. With the integration of the brands Clever, Globecar, Roadcar and VanLine brand with the vans, in addition to the parent brand Pössl, the Pössl Group was created.

Aboutcamp BtoB: Mr. Wahl, a recent market report says that campervans are well on their way to taking 50 percent of the recreational vehicle market. Do you agree and what is the position of the Pössl Group?
Markus Wahl: Yes that’s right. Campervans are the big winners in the current boom of recreational vehicles. The Pössl Group, a pioneer in this market segment, is the No. 1 in terms of both quality and quantity, both in Germany and in Europe, thanks to its enormous innovative strength!

Aboutcamp BtoB: You are not only managing director, but managing partner. What does the current management structure look like?
Markus Wahl: The main owner is the Glück Group. In the Pössl Group, management is carried out by several managing directors and division heads according to the areas of responsibility.

Aboutcamp BtoB: Where are the Pössl Group campervans currently produced?
Markus Wahl: We have two of our own plants in Germany, one in Vielbrunn and – newly opened last year – one near Erfurt. In addition, we produce in Hungary and as external suppliers we have renowned recreational vehicle manufacturers based in Isny and near Würzburg. 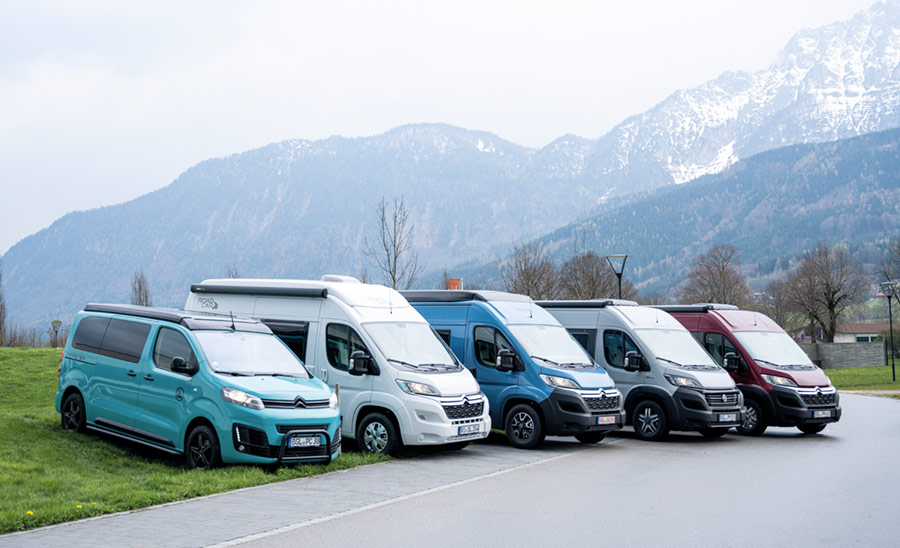 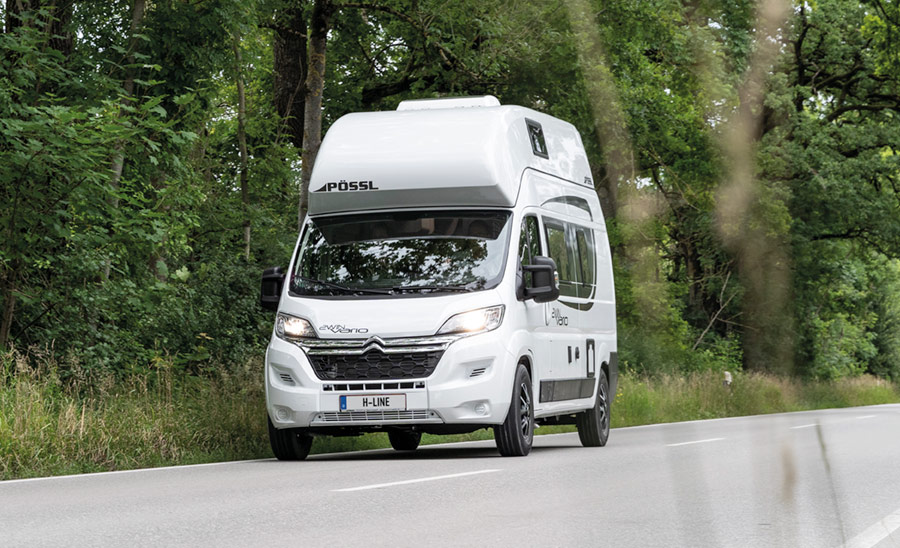 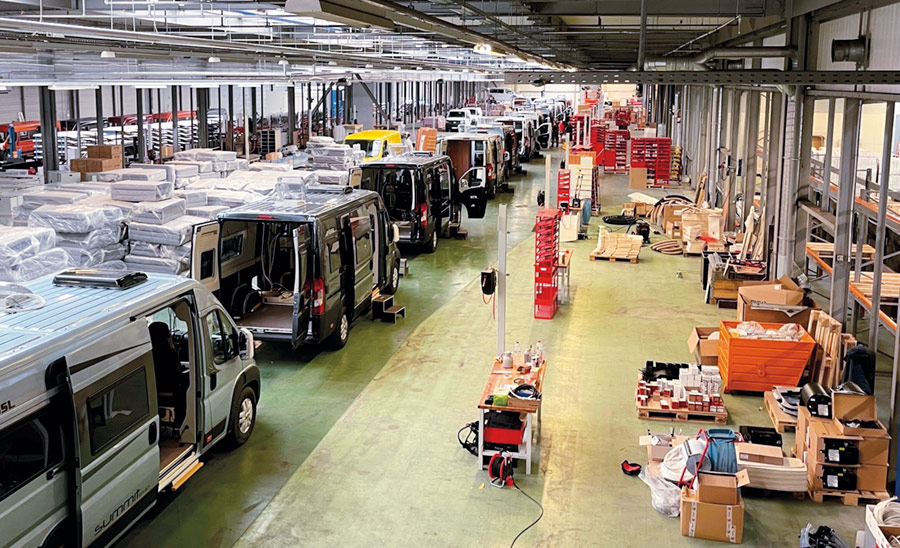 Aboutcamp BtoB: What does the current product portfolio look like at the Pössl Group?
Markus Wahl: We currently sell five different model ranges under the core brand Pössl. The D-Line, the Trenta, the Summit, the H-Line and the so-called “Plus” models. Behind these series there are about 40 different models, some of which have very individual, sometimes even exotic designs to meet the different customer requirements. Our campervans are compact enough for everyday use, and offer more than enough space for a comfortable holiday and come with practically the same equipment as large motorhomes. Just in a smaller space. Depending on the model, a kitchen, toilet and shower, bed, seating area and intelligent storage solutions are all on board. In contrast to larger motorhomes, Pössl drivers are relaxed on the road in cities and can even find a parking space in ordinary car parks.

Aboutcamp BtoB: As you said, campervans have comparatively limited space. What is the secret of the Pössl Group’s success?
Markus Wahl: We are innovative and have perfected the art of using space. Our various developments are pioneering in vehicles that have length dimensions of 5.40 m, 6.00 m and 6.40 m as a rule. The Pössl Group is a pioneer in terms of realising different floor plan variants with different sleeping variations: we offer transverse beds, single beds and electrically height-adjustable beds in all lengths. In the vans, we offer a patented external kitchen design. In our campervans we realise new layout and refrigerator concepts. In addition to the classic washroom, we have developed the “central shower/washroom“ and the “swing-wall-washroom“ for campervans. Our “Summit“-models are equipped with the so-called Sky-Roof® in the cab area as standard, the “Shine”-series with the patented Multi-Roof. We use the “Soft-Close” in our models, which allows the sliding vehicle door to open and close very quietly. Actually, the name Pössl is synonymous with campervans.

Aboutcamp BtoB: What do your current production numbers look like?
Markus Wahl: We will produce approximately 15,000 vehicles at our various locations in the model year 2022. Based on demand, and if all goes well, we plan to increase this further to around 18,000 units for the 2023 model year, with estimated sales of around 800 to 900 million euros.

Aboutcamp BtoB: Speaking of “if all goes well”. How much is the Pössl Group affected by supply bottlenecks?
Markus Wahl: To the same extent as all other manufacturers of recreational vehicles. Sometimes chassis are missing, sometimes upholstery, then electrical parts, pumps or even panelling. Just the normal madness.

Aboutcamp BtoB: What is the significance of pop-up roofs at Pössl campervans actually?
Markus Wahl: Pop-up roofs are developing rapidly in all of our models – for the campervans or the smaller vans as well. So far, about 10 percent of our vehicles were produced with pop-up roofs. But this number is constantly rising. Thus all our “urban vehicles” such as the Campster and Vanster as well as Campstar and Vanstar are generally equipped with pop-up roofs. We are planning an annual production of about 4,000 vehicles. Actually these roofs were delivered by a partner in Poland. 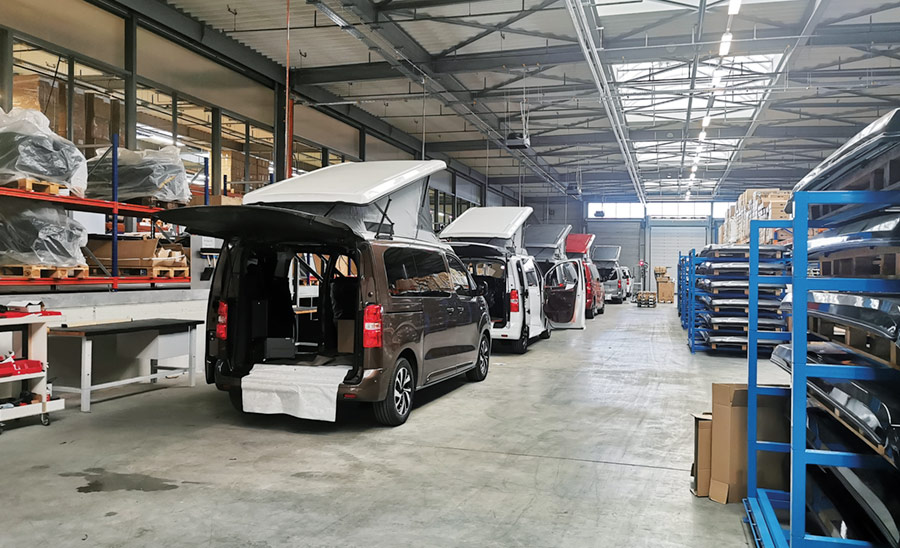 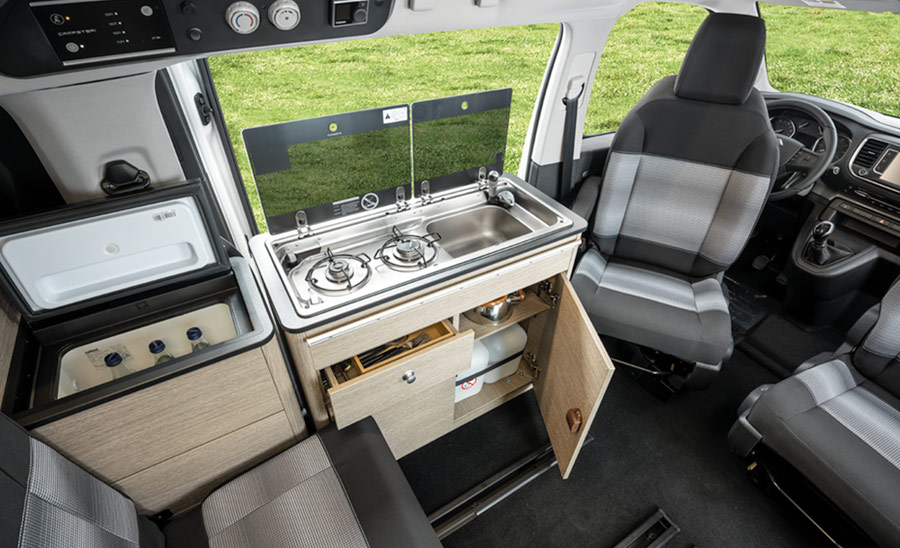 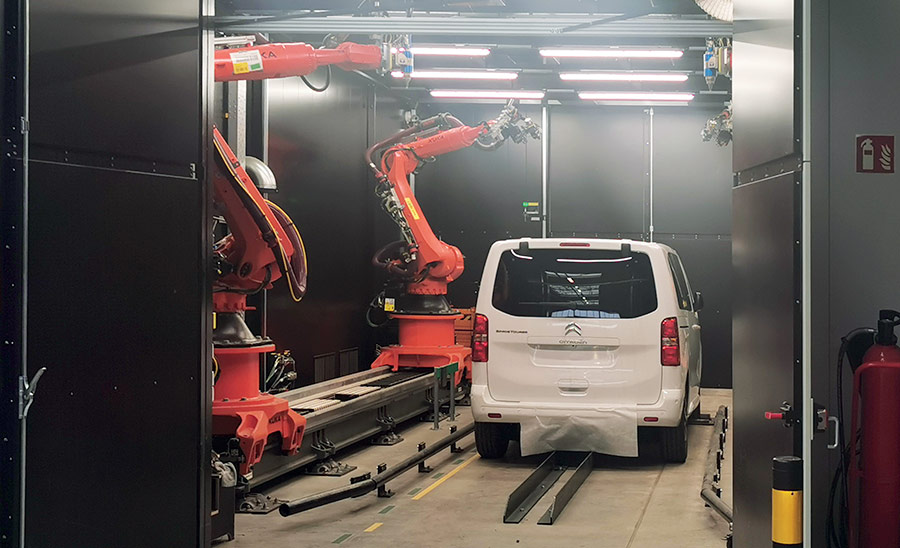 Aboutcamp BtoB: So far you have mainly built your vehicles on chassis from Fiat, Citroën and Peugeot. Recently, Mercedes has also joined the range.
Markus Wahl: That’s correct. Since 2021, we have also a cooperation with Mercedes due to the strong demand of our customers. Based on the Mercedes Vito Tourer Pro and the V-Class, we produce vehicles suitable for underground garages, which are also equipped, among other things, with our patented removable “Easy Move Kitchen”. Here we plan to produce 1,000 units in the coming year.

Aboutcamp BtoB: Speaking about future, how do you see the development of an e-mobile?
Markus Wahl: We are prepared. There are countries whose legal regulations are on the way to significantly reducing the use of combustion engines. We then offer an alternative in this field. The Vanster is available as a prototype as a purely electrically driven van. We plan to start series production in April of this year. It has a range of about 300 kilometres, depending on personal driving and usage style. For problem-free use, however, a sufficient infrastructure will then also be necessary. Anyway, in this market segment, the Pössl Group too wants to be among the innovative companies. Just in accordance with our historical strong innovation power and the present market position.