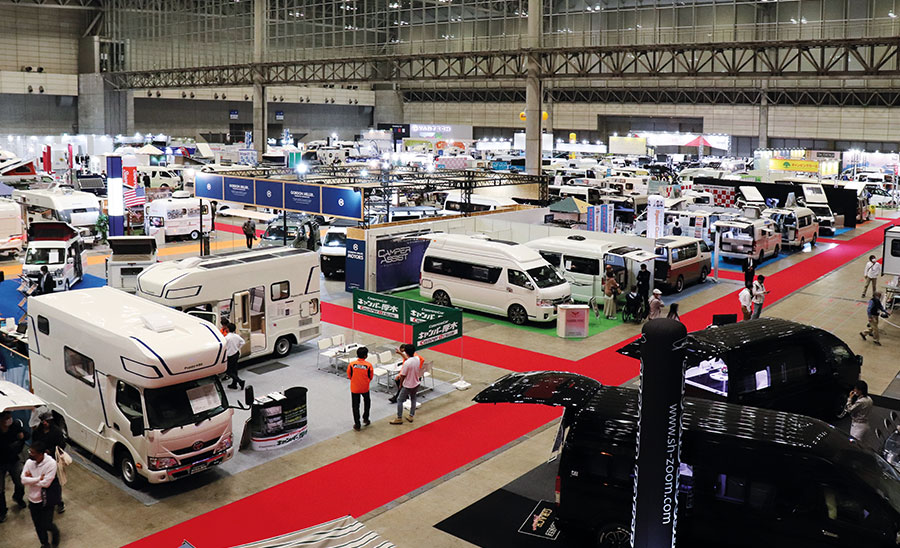 Despite an almost two months delay the largest camping car show in Japan, the 2021 Japan Camping Car Show took place at the Makuhari Messe on the outskirts of Tokyo from April 2nd to 4th. The Japanese RV Association (JRVA) reported the shows as a complete success per the number of show visitors and sales achieved by exhibitors

The last few weeks of show preparation involved some proverbial nail-biting, however, with the State of Emergency suspension announced for the Tokyo Greater Area on March 21st, the show organizers and exhibitors could breathe a sigh of relief. Held at one of the largest event venues in Japan, the Makuhari Messe, the show figures resembled the previous year show with 120 exhibitors and approximately 300 vehicles laid out on 20,000m². The show which typically spans for 4 days, saw 24,100 visitors over the three-day period with both Saturday and Sunday registering over 9,000 each day. Although the numbers were slightly lower than what is typical, most exhibitors reported high value customers with intent to buy. The manufactures and importers also reported positive results post-show despite the fact that most recreational vehicles in Japan currently have a lead-time of nearly a year, sometimes longer.Complementing the show, a very positive coverage could be seen by the media for several key reasons. Since the beginning of the pandemic, the media has taken a higher than usual interest in what is still for many a niche and unfamiliar way to enjoy the outdoors. The ability to safely and comfortably address the “3 Cs” recommended by the Japanese government; “Avoiding Closed Spaces, Crowded Places and Close-Contact Settings” and the relevance to the new tele-work trend brought a lot of attention to the event. Another market specific matter was the 10th anniversary of the 3-11 Tohoku Earthquake which occurred in March. As shown in a 2020 survey conducted by JRVA, nearly 70% of new buyers confirmed that one of the reasons for purchasing an RV was as a disaster prevention measure. With Japan being prone to natural disasters such as earthquakes, typhoons and flooding there are many examples where camping cars had been used as temporary shelters by their owners or in larger scale, by local governments. Although currently the relief vehicle numbers are nowhere close to the American FEMA, JRVA sees the close ties between the USA and Japanese governments as an opportunity to further develop this approach via lobbying at the national government level. To compliment the above, JRVA reported positive figures for 2020 year with registration breaking the 8,000-unit mark. With 7,434 motorcaravans and caravans manufactured domestically, and 690 units imported from abroad the total number of 8,124 units represented a 14.7% growth over the previous year. Motorcaravans dominated the domestic figures with 7,368 units and only 66 trailers produced locally, while the split for the imports was more even with 335 motorcaravans and 355 caravans imported. Majority of the imports were coming from European manufactures while a smaller number was from the US. The show was also the first time that the new JRVA Board of Directors, appointed to their post in February, had the chance to promote their vision and direction for the next years. That vision includes several key focuses including the expansion of production capabilities of association members, further expansion of RV parks and infrastructure, as well as adaptation of best practices from the key international RV markets to stimulate the overall market growth. Per market and product trends which were evident at the show, the following could be observed through the latest figures and our 3-day participation in the show. 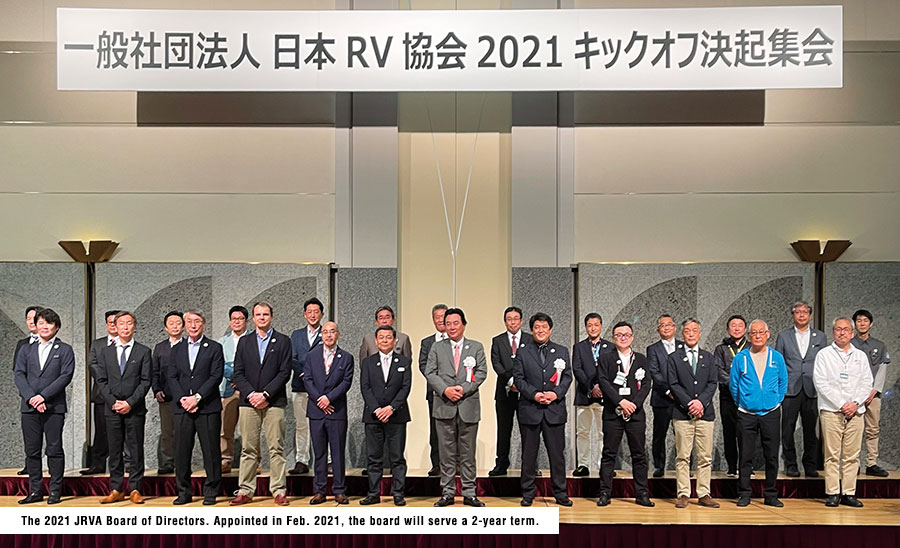 An increase in Business Professionals in their 50’s per new registrations
Proving that the remote work trend is causing some positive impact for the industry, for the 2020-year registrations, an increase in percentage of new ownership for the 50’s year old owner group could be seen while lower percentages were registered in the 60’s and 70`s age groups. Although the shift from 30.3% in 2019 to 34.6% in 2020, may not be groundbreaking, it is following the shift in the working style. Average age of a Japanese RV owner is still higher than many of the international markets, however, the trend is positive. With the domestic market already favoring minivan-like vehicles with relatively boxy designs and shapes aimed at large interior rather than aerodynamics, the basic mentality is already existing. The positive light shone by media on the industry raises the awareness and from there the step up from a minivan to i.e., a van camper is not such a stretch. 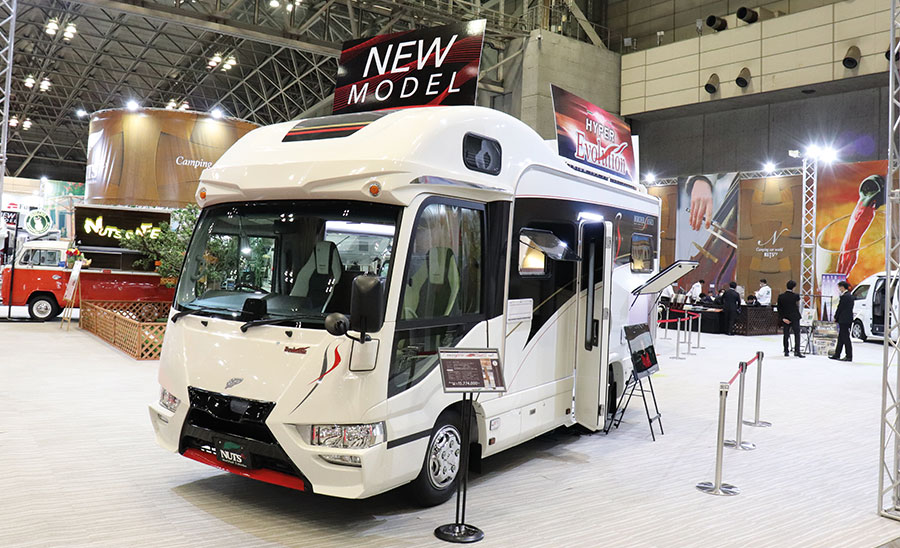 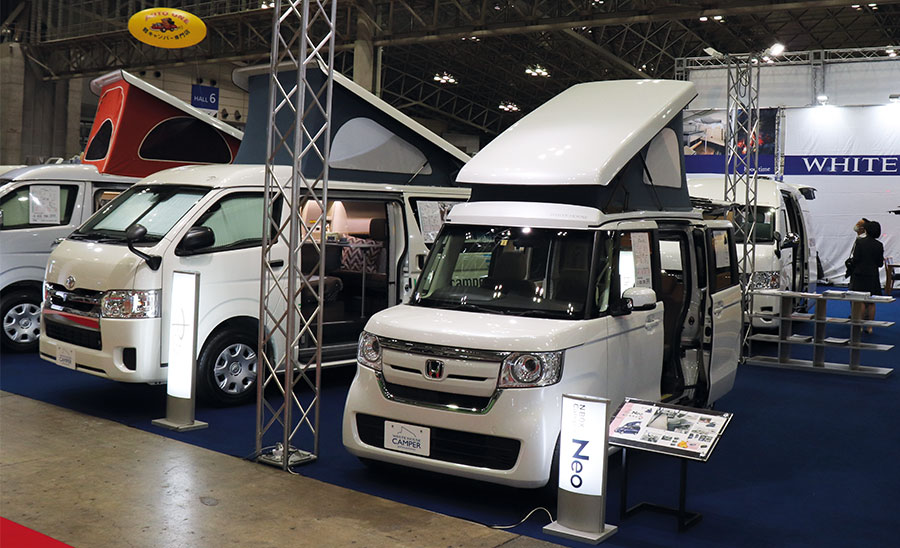 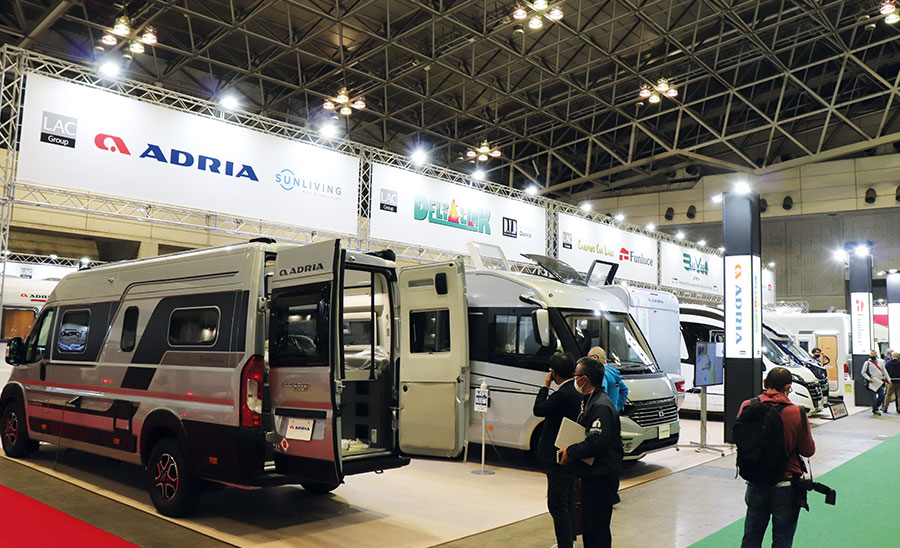 Van Segment & Smaller Vehicles remain as the most popular segment
The van conversion segment which recently has enjoyed a boom in the EU and US markets was already one of the most popular segments in Japan for over 10 years. Recently, the additional popularity for this segment has been brought by younger & more outdoor active audience; however, the original attractiveness is more market specific. In less urban areas, RVs are often utilized as family cars & commuters during the week while in the highly congested urban areas train commuting & limited large parking for vehicles during non-use encourages this trend. For 2020, JRVA official registration figures indicated that over 30% of the market was van based. When considered with another market segment, kei-camper, which best translates to micro-campers, the combination of these two make up over 60% of the registration figures in this market.

Long Lead Times
Historically, the Japanese RV Market has used the “built to order” approach to selling the vehicles. This has been possible due to a vertically integrated approach where many manufacturers own the dealership network & few independent dealers exist. It also allowed the end user for a higher customization of their vehicles. After a purchase, the end user typically waited anywhere from 6-10 months for the vehicle’s delivery. This trend has continued; however, the increased demand has caused that the waiting times increase and are currently averaging at 10 – 12 months with some smaller boutique manufactures reporting even longer times. With such long lead times, one may assume that during sudden economic shifts, end user cancellations is a challenge; however, most makers report cancellations in low single digits. Instead of cancellations, an issue which many producers mentioned was additional option request or modifications which are often made by the end-user during these waiting period. In general, the key players are understanding that such long waiting times cause some potential users to turn away & that decreasing these waiting times can lead to sales advantages. There are several manufactures who are expanding their production capacities with first impacts to be seen later in 2021 and Spring of next year. 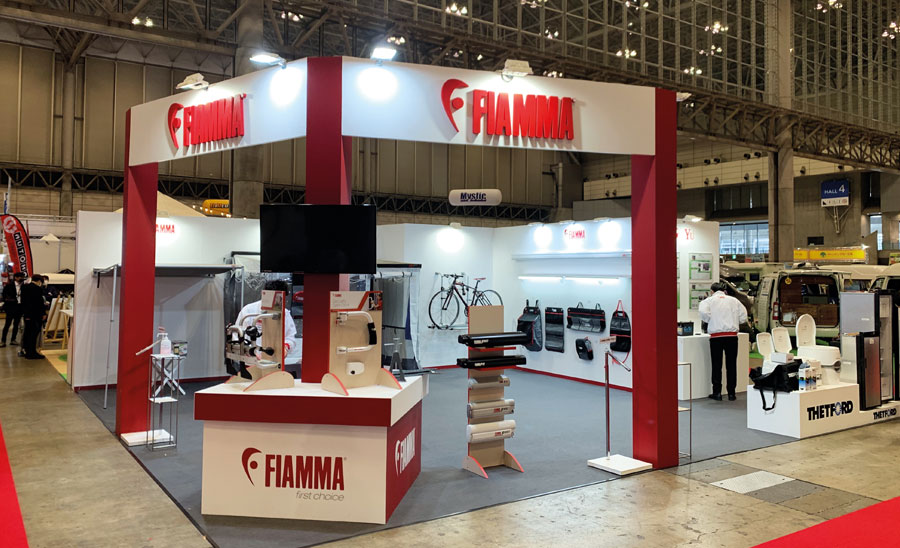 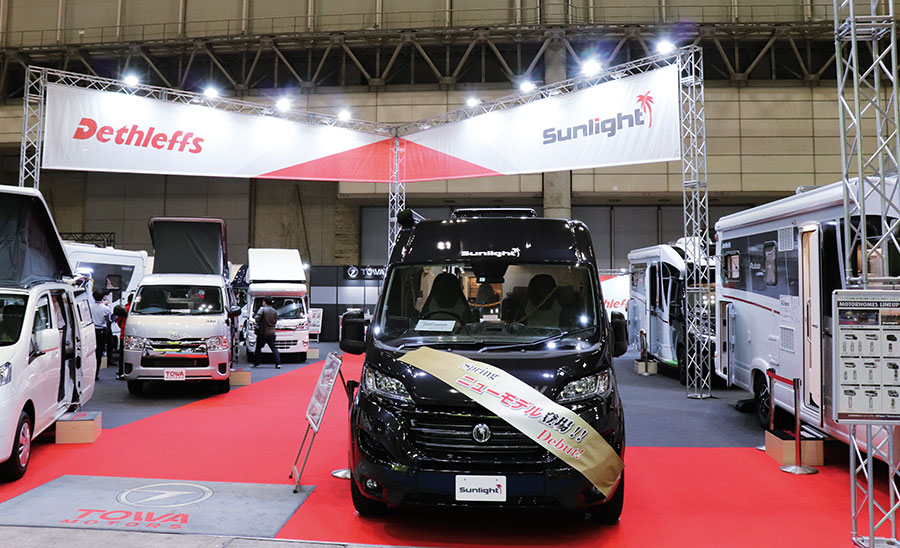 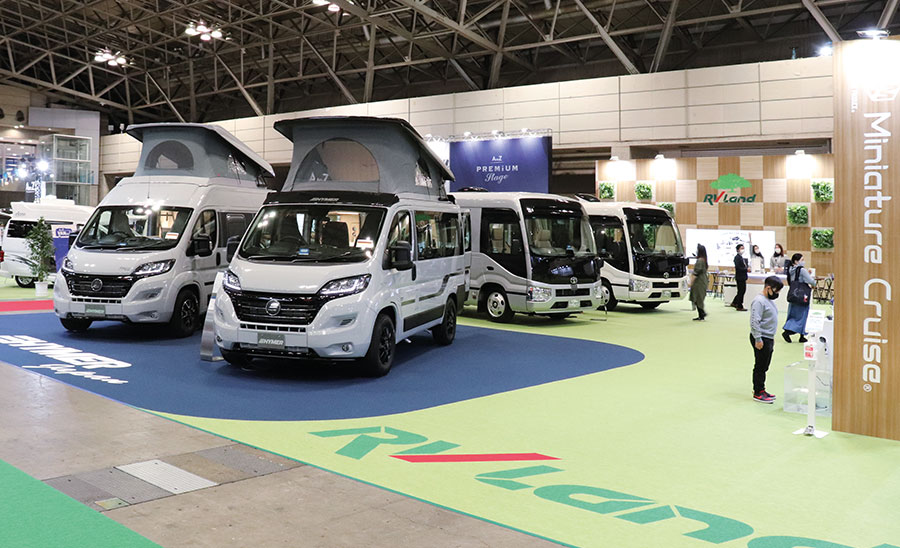 Rental Car Market Demand is increasing
The long lead times and basic market characteristics where many end-users in urban areas do not have physical or financial access to a second or third parking space is favorably affecting the RV rental market. COVID related international travel restrictions are driving people to travel domestically and with the recent positive promotion that the RV Market is receiving from the media, the interest in renting RVs for a holiday continues to grow. The domestic rental market which was originally limited to the demo vehicles rented out to potential customers to close the deal after a family weekend, saw an increased popularity among foreign visitors during the pre-COVID tourism heydays with many considering the 2019 Rugby World Cup as a practice run for the 2020 Olympics. Meanwhile, with the absence of foreign visitors many rental stations have shifted to domestic rentals. The next phase of this segment development will be to see if the current trend for telework and taking longer holidays with the family can remain a long-term trend in a work & office obsessed business culture. Additionally, it is necessary that this new mind set will result in rental periods longer than the 1-2 weekend nights which many operators struggle to juggle at the moment.

Toyota Camroad Dual Rear Wheel Becoming Market Trend
The Toyota Camroad has become the most common base vehicle for the “Cab Conversion” segment and with the discontinuation of the Mazda Bongo in 2020 it has basically cornered the market. The Camroad which is tuned by Toyota to better fit the RV Market requirements has only one competitor remaining, Isuzu Be-Cam. However, with a complicated sales scheme for that model, the Camroad is the default vehicle. Worth mentioning is that the cornering has occurred due to lack of options rather than design superiority, however, the Hino Trucks manufactured, Toyota branded light truck is the de facto in this segment. The RWD truck allows for a load of 1 to 1.5 tons and a 3l diesel is the preferred option for camping car. First introduced for the 2019 season at this Show, the dual rear wheel configuration was was preferred by the manufactures due to the additional ride stability & safety in case of tire bursts; however, popularity lagged among end users due to an increase in vehicle base price. During this year’s show it could be confirmed that although most manufacturers are still offering both options, the dual rear wheel has become the preferred choice over the single one. Although tire bursts are not something Japanese market specific, due to the low kilometers that typical users put on the vehicles and the long parking time, the deformation and structural failures during driving are occurring quite often. 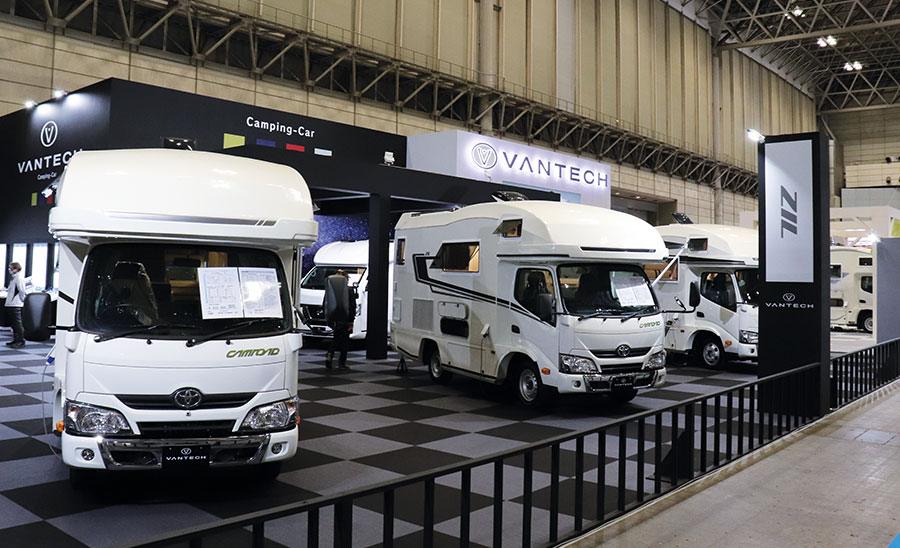 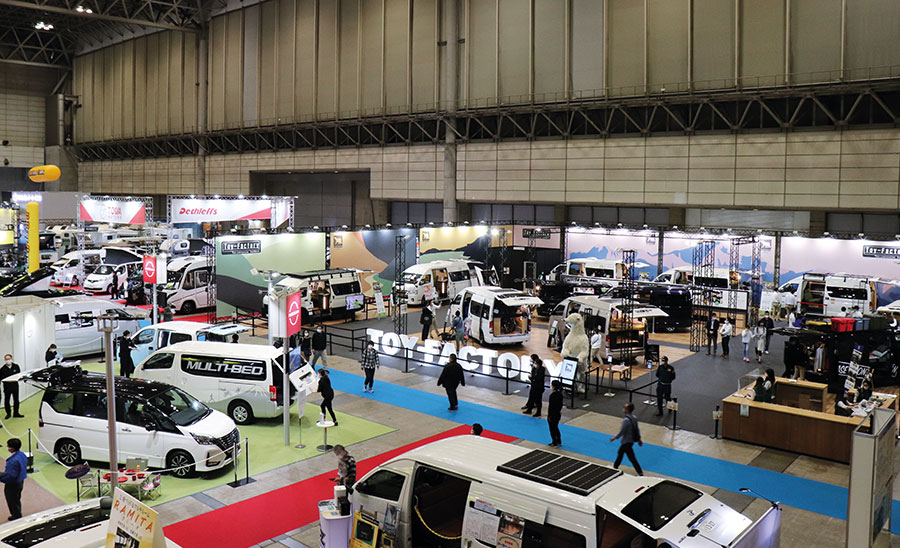 Lead-Acid to Lithium Batteries
The trend of migrating to lithium sub-batteries was evident throughout the show. Several of the key JP manufactures used this year’s shows to launch their new models with the lithium-ion battery technology. Limited access to external power at many campsites and lack of LPG charging infrastructure for campers forces the manufactures to base the vehicle power concepts around onboard electrical power. Combined with a travel style which composes of one-night stays at various destination, plus high equipment rates for electrical fridges, microwaves and off-grid AC translates to average power banks in 200-300 Ah ranges with high rates of deep discharges. Despite many owners opting for solar panels, the cycles that batteries go through cause a quick deterioration to lead-acid batteries. Thus, the recent trend of switching to lithium batteries. The solution and approaches are still quite varied, and the wide availability various brands is causing that there is no clear market leader in this segment at the moment. The one challenge that remains is how to balance quick and efficient charging of the large battery banks during the relatively short distances that most campers travel.

Conclusion
All in all, the 2021 Japan Camping Car Show, despite the two-month delay was carried out with all necessary precautions and resulted in a positive promotion of the RVing lifestyle. The show also gave the new JRVA Board a great springboard to promote their agenda and reconfirm that the Camping Car market is on the right track to a successful future. Stay tuned for more update and information about our markets next steps. 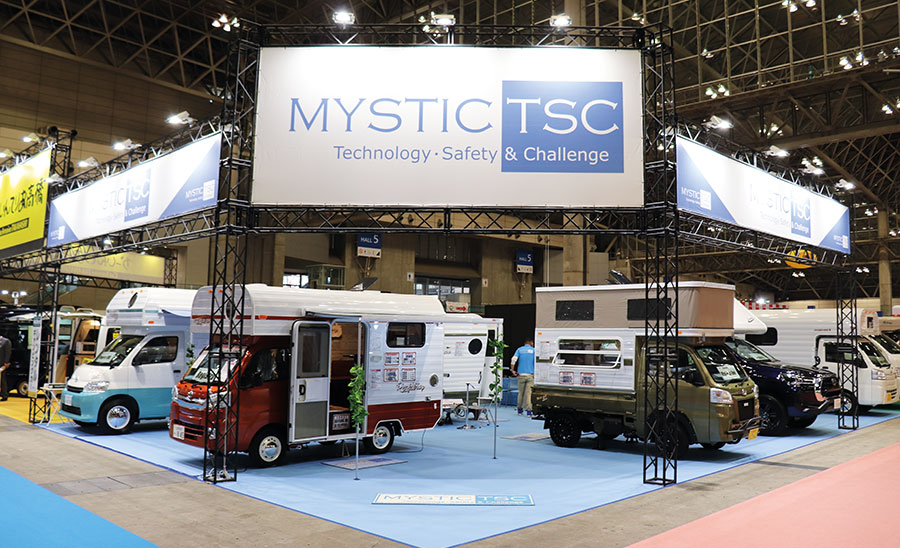 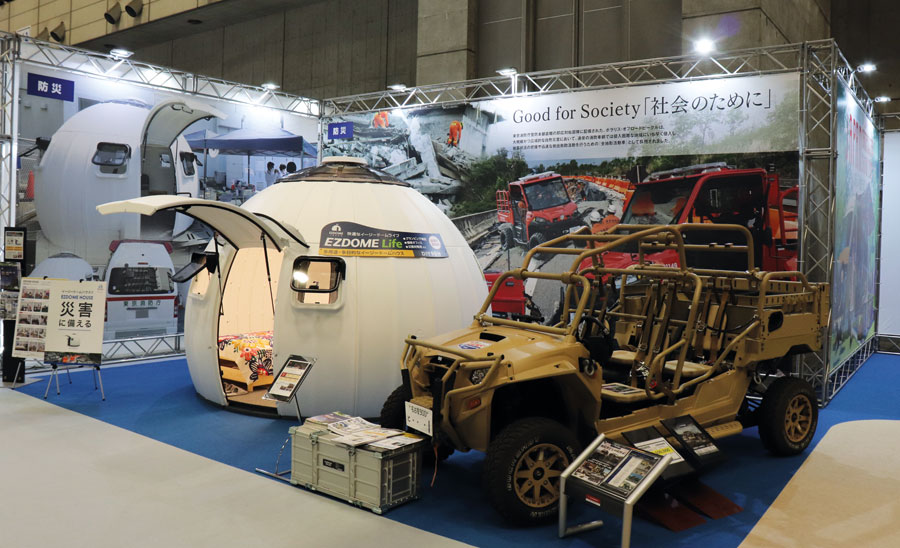 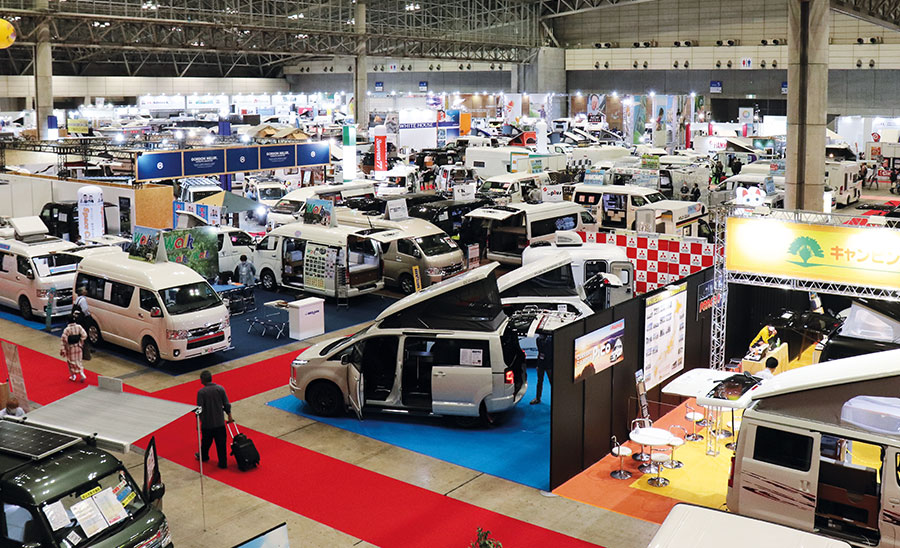