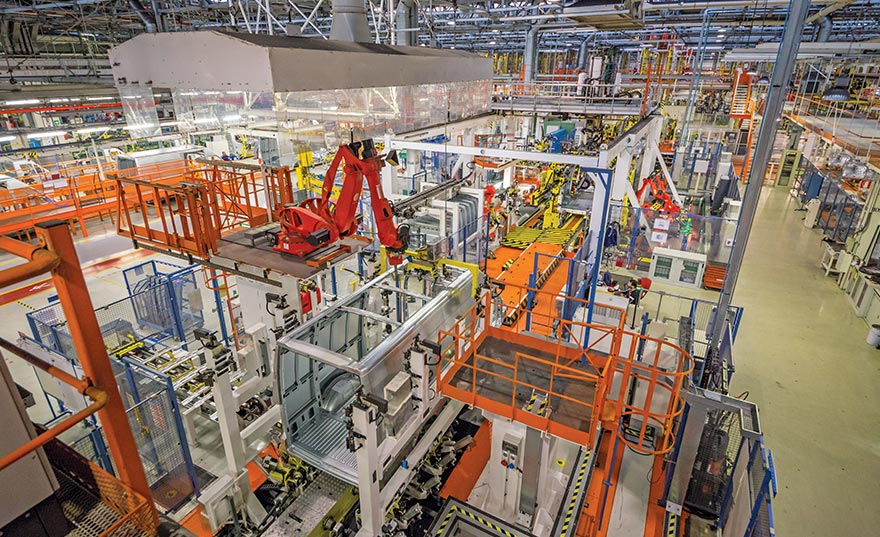 Where IVECO Daily comes from

We visited Suzzara IVECO plant, which is a modern factory, organised according to production criteria of excellence, in line with the strict World Class Manufacturing standards. Here, IVECO Daily was born.

For the RV industry, IVECO Daily has been and definitely remains an outof-ordinary vehicle, which has undergone a remarkable transformation in recent years. While not abandoning the innate robustness, Daily has been increasingly refined to offer an ever greater, top level driving comfort and travelling performance. To understand exactly what is behind a vehicle like the Daily, it is useful to take a look at its production line. And this is exactly what About Camp BtoB has done by visiting Suzzara IVECO plant, which has always been considered as Daily’s birthplace. It is in fact here, in the countryside around Mantova (Lombardia, Italy), that IVECO light commercial vehicle has been produced since 1978. Suzzara production site not only is the main plant but also the only one producing Daily’s versions aimed at RV industry.

The Suzzara plant
Daily was born in 1978, three years after the foundation of IVECO. Suzzara plant, however, dates back well before. The original nucleus, which still exists, actually dates back to 1878: it was built to support “Francesco Casali & Figli” company, which repaired agriculture machinery. In 1934 the company was bought by OM, the first major truck manufacturer in Italy. Thus, besides agricultural machinery, the plant manufactured work vehicles as well. In 1956 the ownership changed again: OM was acquired by Fiat and soon production lines of small van Fiat 600 and Fiat 900 were implemented at Suzzara plant. Finally, in 1975, IVECO was established and Suzzara was chosen as Daily’s production site. Therefore, almost forty years of history bind Daily to Suzzara plant. Over time, the factory has evolved and has been greatly expanded: in the 1990s the large current structure was added to the original nucleus located in the town’s centre. The economic crisis had certainly reduced the demand for Daily, but today the production has almost come back to 2008 levels. Various parts of the Daily like the engine, produced in Foggia (Puglia,Italy), but also the chassis, the dashboard, the seats and many other, converge to Suzzara production site, where, assembled together, give birth to the finished product. In order to better organize the various components arrival according to just-in-time logics, some of these suppliers have their seat within the factory perimeter or in its immediate vicinity. In recent years, Daily has profoundly changed, without betraying its origins though: the most notable change occurred in 2014, when a completely new product came about, while in 2016 other changes rounded off the Daily line. The wide variety of possible combinations is truly amazing, as it is capable of giving birth to vehicles that are very different from each other. There are 12 available engines, 12 body versions (with 3 different interior heights) and 13 wheelbases, 5 gearboxes, 2 types of front and 4 rear suspensions. Plus, we have cab versions (single or double cabin), chassis-cowl versions (used to build the motorhome) and several vans. Vehicles are rear-wheel driven, but even a 4WD Daily exists. Also different capacities are available, with a total vehicle weight ranging from 3.3 to 7.2 tonnes. In a nutshell, by combining the various elements at your will, you can get more than 8,000 different Daily versions. It is noteworthy that almost one third of the vehicles produced has been customized, i.e. implemented in only one version.
Variety is so wide that, on average, only 3 Daily’s identical specimens are produced (not to mention the wide coat colors range). When the new model came about in 2014, significant investments were aimed at certain lines of production’s modernization, in particular bodywork’s, in order to significantly boost van versions (including minibus) production.

The production line
The activities of the Suzzara plant are directly coordinated from IVECO’s headquarters in Turin. The plant consists of three production departments: bodying, painting and assembly. At the end of each cycle, quality control is performed. The bodying unit receives the metal sheets, which are assembled by welding. As it involves the use of suitable robots, this is a more highly automated process compared to the past. The entire bodywork cycle per vehicle requires 6 hours to be completed. Then the vehicles’ bodies are moved to the painting department, the most complex area of the plant, developed on two floors. We have a first pre-treatment phase: vehicles’ bodies come in large tanks to be washed, degreased, phosphated and protected by cataphoresis. In the cataphoresis bath (more than 300 cubic meters ), any sheets’ area is protected, holes included, by a thick paint layer. Then they are dried in a large furnace at 150° C. Above this protective layer, the actual paint is directly applied, which is specially selected for each vehicle: over 400 colors range, of which some are “private” (e.g. army’s military green). The painting mainly concerns the cabs’ cabin and the van’s entire body, while the chassis comes already painted from external suppliers. 90% of the activities performed in the painting department is automated. The entire coating cycle requires nearly two shifts to be completed. After completing the painting phase, bodies are moved to the assembly shop. On one line the metal body is equipped with various additional parts such as rear lights, dashboard and doors’ plastics, while on another line travels the chassis which the engine unit is bolted to. The two lines meet at “marriage” point, where the body is lowered onto the chassis. Finally, electrical wiring, seats and front lights installation are implemented. Process organization and deadlines compliance are crucial, otherwise the various components will never arrive to “marriage” point in accordance with the scheduled timeframe. It is therefore crucial the components’ complex management (more than 10,000 part numbers) and the over 200 suppliers timely contribution. Even delivery timeliness (suppliers located at a distance not exceeding 4 hours’ drive from the plant) is essential to reduce stock and optimize production. 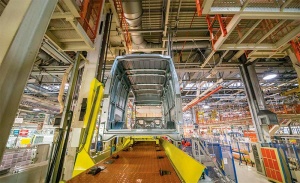 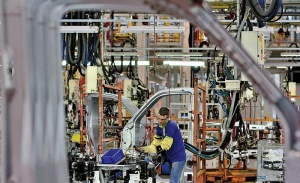 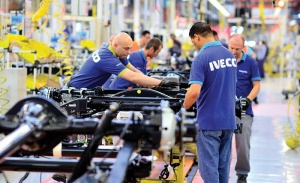 The attainment of W.C.M. excellence

As an evolution of Lean Manufacturing, W.C.M standard (World Class Manufacturing) provides ratings for production plants according to strict parameters focused on costs’ containment, which is to be achieved through reduction of defects, failures, accidents and more. Adopted at industrial group level, W.C.M. was introduced in Suzzara plant in 2007. Since the very beginning, we have seen considerable improvements and in 2009 the excellent results obtained have helped the plant to gain the prestigious W.C.M. bronze medal award. Today Suzzara plant, together with the IVECO factories of Madrid, Brescia and Valladolid, has achieved the coveted silver medal award, but some areas of the site are even more cutting-edge, just like the assembly “golden area”. The transition from one level to the next is quite complex because it involves all productive activities’ reorganization, with considerable costs related to staff training, work place organization, safety improvement and various changes to the plant’s overall structure.

The Daily HI-MATIC: the star in the luxury motorhome segment
IVECO is confirmed undisputed leader in Europe in the RV premium segment over 5.2 tonnes with record results in 2016. In Germany, the most important market, Daily registrations for Motorhomes over 5.2 tonnes doubled last year, reaching nearly 800 registrations, more than half of the market. The Daily is leader and is still gaining market share also in France, Switzerland and the UK. Sweden and Norway are becoming important to IVECO as customers prefer more and more luxurious camper. These outstanding results have been accomplished thanks to the Daily HI-MATIC that combines the reliability of the rear wheel drive with its unique eight-speed automatic transmission and the most powerful engine in its class (205 hp, 470 Nm). The Daily HI-MATIC transmission provides ultimate travel comfort thanks to its self-adaptive shift strategy allowing the new gearbox to engage smoothly the correct gear in less than 200 milliseconds. It also guarantees maximal safety in case of an emergency by ensuring that the brakes are always cold, even on long journeys – a benefit that many mobile home owners had requested. The Daily HI-MATIC is available with single wheel or twin wheels rear axle and it is the only vehicle of its class that offers a range from 3.5 to 7.2 tonnes of Gross Vehicle Weight, with a new intermediate 5.6 tonnes model and a towing capacity up to 3500 kg. Mario Seidenschwarz, Iveco Camper Business Development EMEA, commented: “Nearly 97% of our production in the RV sector is made by the Daily HI-MATIC. Everybody wants our class exclusive 8-speed automatic gearbox. Our product is working very well and the customers get convinced very easily. The trend is, like for cars, having only two pedals!” With the New Daily Euro 6 IVECO has also launched the revolutionary new application, called DAILY BUSINESS UP, an open platform which keeps the driver always connected, going beyond the simple concept of infotainment. Customers, once connected through their own smartphones or tablets, can receive valuable tips for improving their driving style and save fuel using the DSE (Driving Style Evaluation). In addition, the entire Vehicle Management System can be displayed on the device as an extension of the dashboard and, in the event of a break down, the nearest service partner can be contacted automatically through the IVECO Assistance Non-Stop button. Providing excellent handling, stability and absolute driving pleasure, the Daily HI-MATIC is the best choice for premium motorhomes.