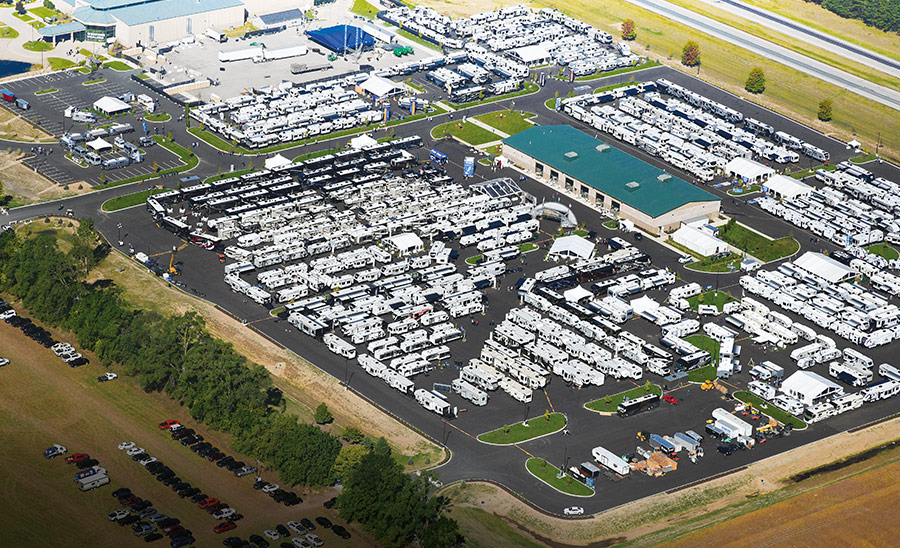 Despite fears of an economic slowdown and a bulging inventory pipeline, manufacturers previewed a wide range of new product at the 2019 Elkhart Open House Week, with an emphasis on smaller, energy-efficient units.

Media reports leading up to this year’s Open House Week in Elkhart, Indiana had many in the North American RV industry wondering just what they would find at the industry’s annual new product extravaganza. Reports of higher-than-optimal inventory levels industry-wide and year-over-year sales declines of greater than 20 percent suggested a subdued atmosphere could be expected. Yet when RV dealers began arriving in the Elkhart area in late September – where more than 65 percent of North America’s RVs are manufactured – a sense of cautious optimism had replaced any fears of an impending recession. 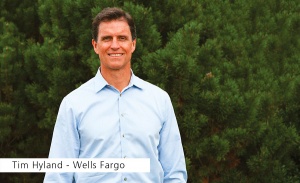 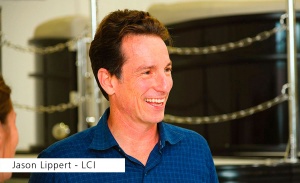 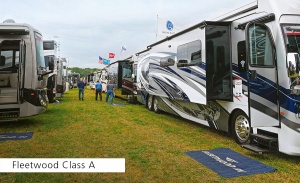 Inventory levels remain higher than where manufacturers would like to see them, due in large part to a bubble that began forming in 2017 as RV builders continued to push new product into a contracting market. “Through the course of late 2017 and into 2018, one of the issues that the industry has been dealing with is a bit of an inventory bubble,” explains Tim Hyland, president, recreational/specialty vehicles group at Wells Fargo Commercial Distribution Finance. “A lot of inventory showed up at one time, and so dealers and manufacturers have been collectively working to get through that inventory backlog. They’ve done a good job and are making progress. Retail sales for 2019 are off a bit from the high levels of the previous two years, but this will still likely prove to be the third-best year ever. From a wholesale perspective, 2019 is also tracking toward one of the top years ever.”

Lippert Components Inc. CEO Jason Lippert agrees that while 2019 sales are not likely to equal those of the previous two years, what the industry is seeing is a short-term blip rather than the beginning of a longer-term trend. “The climate’s challenged a little bit right now because dealers have been destocking inventories and while they’re destocking, there’s additional capacity on the OEM side,” says Lippert. “It’s a unique situation. Because dealers can get product when they want it, they’re not looking to stock up like they normally do. But we’re optimistic about the business. The products are better than ever, and we think that the RV industry has a bright future here.”

That sunny forecast was very much in evidence as manufacturers presented their 2020 product lines to generally enthusiastic dealers who descended on the Elkhart area from across the US and Canada. While Class A motorhomes, large fifth wheels and large travel trailers continued to command strong interest, some of the heaviest crowds appeared to be focused on smaller trailers and Class B motorhomes built on a variety of different van chassis. At the Thor display located outside the RV/MH Hall of Fame in Elkhart, a number of existing and prospective dealers stopped by to see the latest product offerings from Erwin Hymer. “I think dealers are intrigued and interested to see something different,” explained Thor director of marketing, Denise Chariya. “Consumers always want to see something fresh and dealers always want to have something fresh to show them. Units that reflect European styling and preferences always draw interest in North America. I think a lot of the dealers are interested to see what’s new this year, and to talk to the manufacturers and gain a better understanding of how they’re designing product in Europe and how it differs from North American product.” 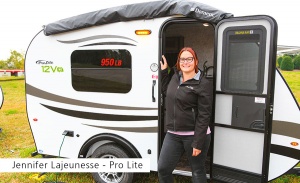 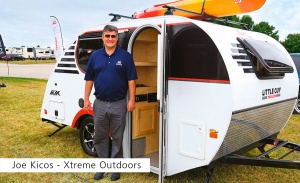 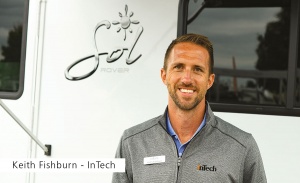 For Canadian trailer manufacturer Pro-Lite, exhibiting at the RV/MH Hall of Fame provided an opportunity to showcase its full lightweight towable line while debuting its all-new 12V teardrop trailer, featuring a renewable energy package that uses no propane whatsoever. The 950-pound unit sleeps three people, can be towed by a compact car and carries a retail price in the range of US$20,000, making it affordable to the eco-conscious millennial buyers that it targets. Two 100-watt solar panels, in combination with a 100-amp battery and 2,000-watt inverter, power all onboard electrical appliances. Options include a portable electric heater, a glass-ceramic induction cooktop, a 1.7 cubic-foot refrigerator, a bag awning and tempered glass windows. “It’s a green trailer in every sense. You can plug it in or use it with the solar-panels to charge the batteries and there’s no need for propane whatsoever,” says Pro-Lite marketing representative, Jennifer Lajeunesse. “In terms of capacity, it’s powering all eight units that we have on display here at the Open House. As long as you’re careful with consumption, it functions just fine with the two solar panels.” Lajeunesse notes that the ability of the trailer to operate on solar energy appeals to buyers who prefer to camp at remote sites without power. “We have had a lot of response from consumers who like to fish or just get  away from everyone else. This product absolutely enables that.”

Also drawing dealer attention with its small trailers was Xtreme Outdoors, the new company formed following the acquisition of Liberty Outdoors/Little Guy in July by entrepreneurs Yong Lee and Vikram Kaul. Joe Kicos, founder of the Little Guy brand and now director of sales at Xtreme Outdoors, said dealers had shown considerable interest in the company’s teardrop trailers. “We continue to enjoy strong interest in our staple products like the Little Guy Max and Little Guy Mini Max, both of which have new interior woodwork in a cherry finish for 2020 that we’re very excited about. But what’s really generated a lot of interest is our new Micro Max unit, which we’re debuting here at the Open House. It’s a new prototype unit that weighs in the range of 1,600 pounds and fits inside a residential garage for storage. But it still has a full five feet, 10 inches of headroom inside. It has a full kitchen, there’s a Porta-potti option for it and the exterior cargo rack can carry canoes and kayaks. It even has an external shower. Dealers have shown a lot of interest in this product, we feel it will resonate with a large group of buyers.”

Keith Fishburn, InTech
Exhibiting nearby, InTech presented a diverse display spanning all three of the company’s product lines. “There’s been a strong upward market trend for lightweight products and smaller towables,” notes sales rep Keith Fishburn. “We’re showing new floorplans in our Sol Horizon line, which we debuted last year, along with redesigned Luna teardrop units with upgraded interiors, including one model with a cassette toilet.

We get a lot of requests to include a toilet in a smaller unit like that, so that’s brand-new for the 2020 model year. There are new tweaks to our Flyer product range to keep things fresh, and we’re seeing quite a bit of dealer interest. Again, there’s been an uptick in interest in smaller, easily-towable product and we’re looking forward to the coming RV show season where we can show them off to consumers.”

Airstream
Iconic travel-trailer brand Airstream also showed renewed emphasis on smaller units in its 2020 lineup, including the latest editions of its historic Bambi and Caravel single-axle models, offered in lengths from 16 to 22 feet. All-new décor options for 2020 feature bright, neutral or white tones with warm wood accents that yield a fresh, bright interior look. “They’re iconic models within an iconic brand,” says Thor’s Denise Chariya. “With their new décor options they continue to define their segment.” 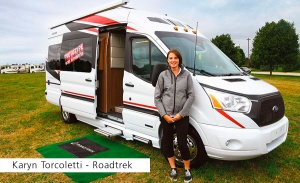 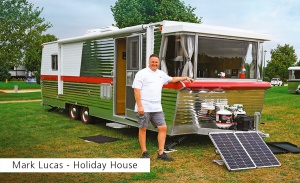 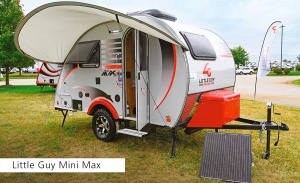 Karyn Torcoletti, Roadtrek
Among motorized units, perhaps no marque drew greater interest at Elkhart this year than the relaunched Roadtrek Class B van brand. Now operating as a new company under the Group Rapido family umbrella, Roadtrek displayed six models at Elkhart. “We’re here displaying for the first time as a brand-new company, Roadtrek Inc.,” says head of marketing and communications, Karyn Torcoletti. “The six units we have on display represent what will be in the lineup going forward. We’re here to meet our current dealers, hopefully attract some additional new dealers to our growing family and show the industry that Roadtrek is back and that we’re going to have great things coming.”

The showpiece of Roadtrek’s Elkhart display was a prototype built on the Ford Transit platform. “We’re debuting our Ford Transit Haven, which is offered as a mid-2020 model and is the first model we’ve built on the Transit chassis,” says Torcoletti. “Our plan is to formally introduce it at the 2020 Hershey RV Show in Pennsylvania. It’s a beautiful unit, with a dark pecan interior and a lovely long galley with granite counter tops and a European-style slimline fridge for extra space. We’ve had nothing but positive feedback from the prototype and we will be moving forward with this model.”

Winnebago
Also showing a new Class B was Winnebago, which used the Open House week to present its all-new Boldt, described as a “four-season Class B for real-world use.”  Based on a Mercedes-Benz Sprinter chassis, the Boldt is available in a choice of two floorplans and in either two-wheel or all-wheel drive configurations.

Mark Lucas, Holiday House
Where many manufacturers took advantage of the Elkhart Open House week to reveal forward-looking designs, at least one builder came to the event with its eyes firmly on the past. Holiday House exhibited three retro-styled travel-trailers that harken back to the glory days of the 1950s and 60s when the Holiday House brand was a campground mainstay. “We acquired the Holiday House brand a couple of years ago, and today we offer three travel trailers, an 18, a 25 and a 27,  which each combine the iconic, retro styling of the original with every modern convenience,” notes Holiday House owner, Mark Lucas. “With modern materials and today’s production technologies we’re able to produce an 18-foot trailer with an interior layout that echoes the original, yet it’s only 3,500 pounds, allowing it to be easily towed by a family-sized vehicle. People see the 27-foot model we have on display, complete with its adjacent solar panels, and there’s a real visual disconnect, they aren’t sure what to make of it. It’s very much the past meeting the future. We’ve been in production now for 16 months and we’ve picked up some new dealers here, including two in Canada.”