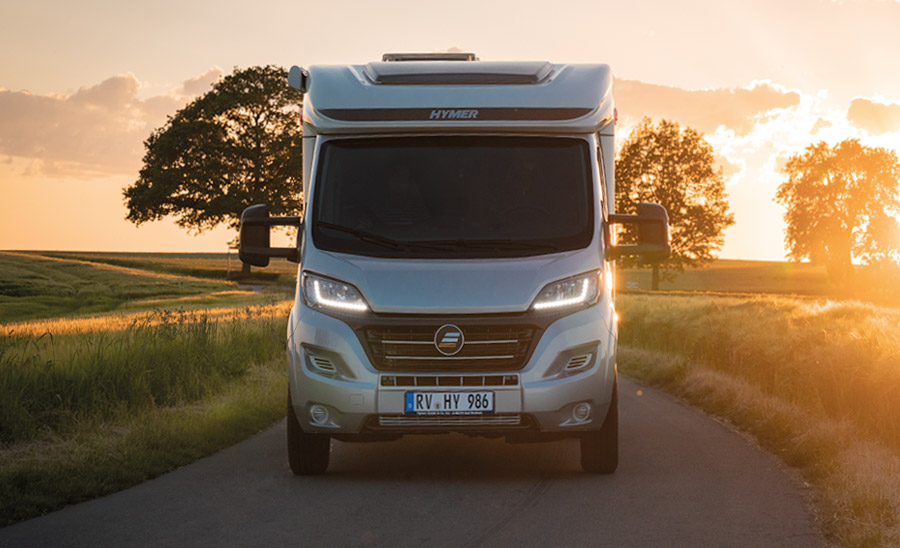 Will semi-integrated compact units be the most popular RVs in Europe in the future? Great handling, lower cost and lower weight play in their favour.
A future inspired by the past …

In the European market there is great interest in compact vehicles. The campervan dominates the scene, but the rise of other compact vehicles is also detected. In fact, there are more and more semi-integrated models with smaller dimensions and there are also some compact motorhomes. Is this a passing trend, or will it have profound repercussions on the market in the near future?
The term “compact” is relative, it must be related to the dimensions of medium-sized vehicles in a specific historical period and a specific market context. In Europe the average length of a semi-integrated model is about 7 metres, with a width of 230-235 cm and a height from 285 to 305 cm. 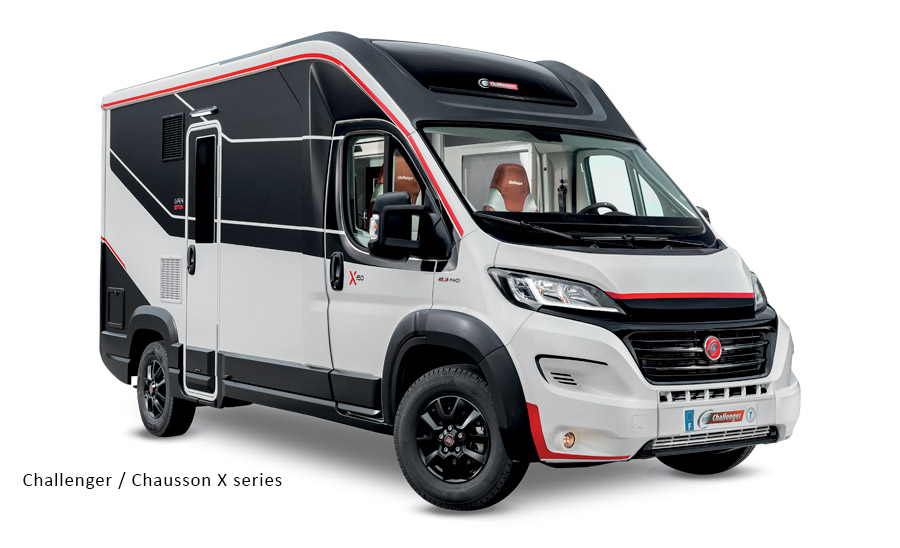 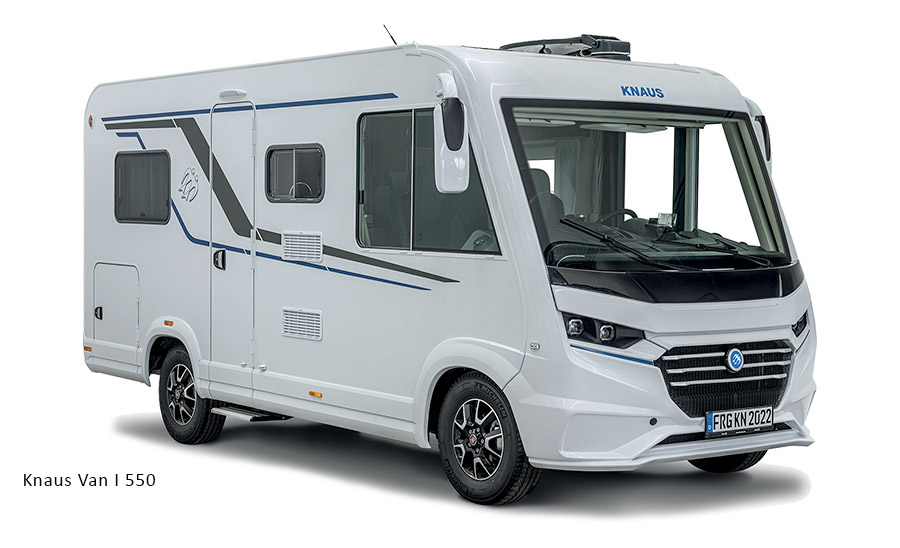 As far as length is concerned, a semi-integrated that’s 599 cm long is certainly considered “compact”, but more and more manufacturers are defining 660-670 cm vehicles as “compact” as well. Many compact semi-integrated models also have a narrower width of 215-225 cm. As for the height, we must consider that from 2010 the semi-integrated models equipped with drop-down bed have begun to establish themselves on the European market. The height of these models is greater to make room for the additional bed placed above the living room. The semi-integrated compact, on the other hand, most of the time, do without the drop-down bed and therefore have a reduced height of approximately from 270 to 285 cm. 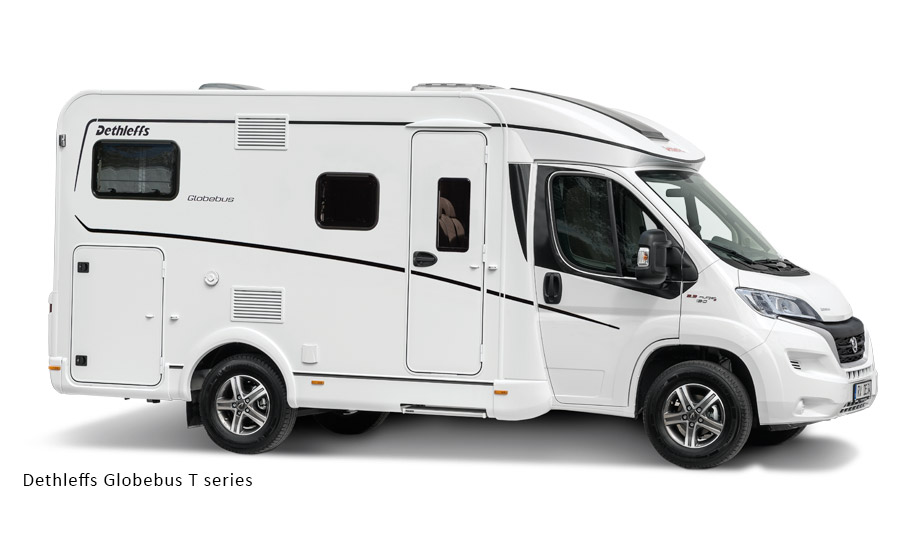 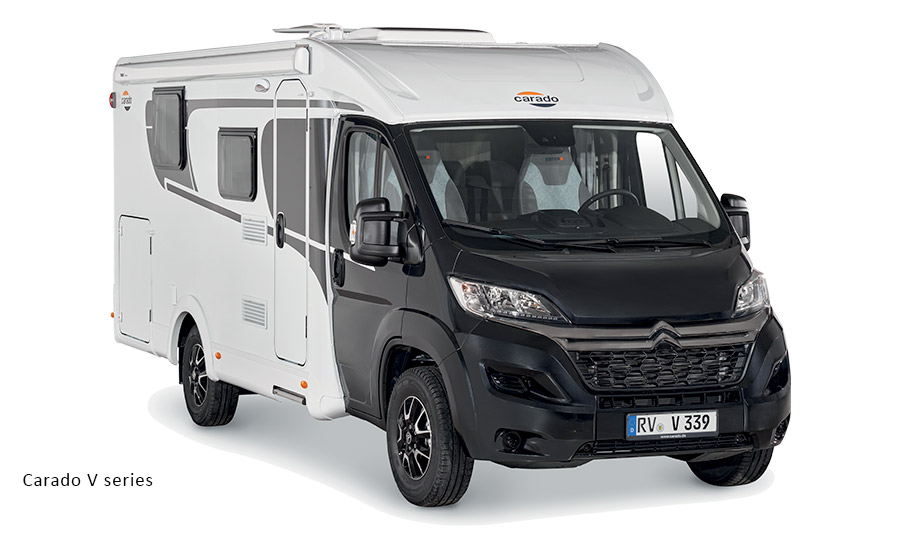 Semi-integrated and motorhomes
Compact, semi-integrated models are the link between classic semi-integrated models and campervans. The handling is similar to that of a campervan, sometimes even better thanks to the reduced wheelbase. However, the internal space is greater, both vertically and wider, albeit slightly, and the same for the height. Very often, however, there is better thermal insulation due to the use of sandwich panels instead of insulated sheets. Another advantage, during the cold season, is having a narrower side door instead of a large tailgate. And the prices are similar to those of the campervans. The semi-integrated compacts were born following a change in the user: fewer and fewer families using campers, and more and more two people crews. These are people who do not want to be driving bulky vehicles; perhaps in the past they had large vehicles but now they are looking for an agile and better handling model. In Europe, the semi-integrated compact was also created to solve the problem of high mass. Until recently, with a normal car driving licence you could only drive vehicles with a total weight of up to 3,500 kg: the compact semi-integrated models meet this restriction and have a good load margin for luggage and extra accessories. The same considerations apply to compact motorhomes with a reduced width: they are penalized by higher construction costs, but they have a better habitability, with a decent width, even in the front section. 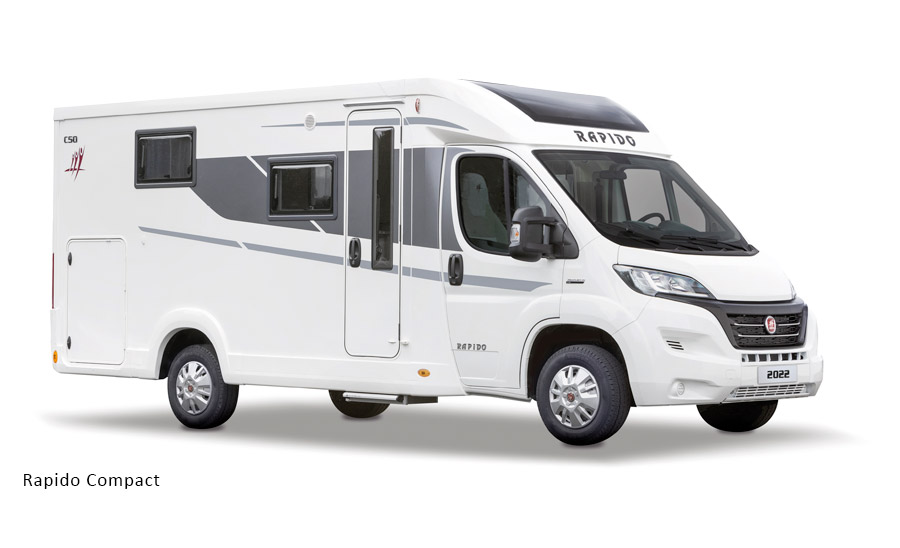 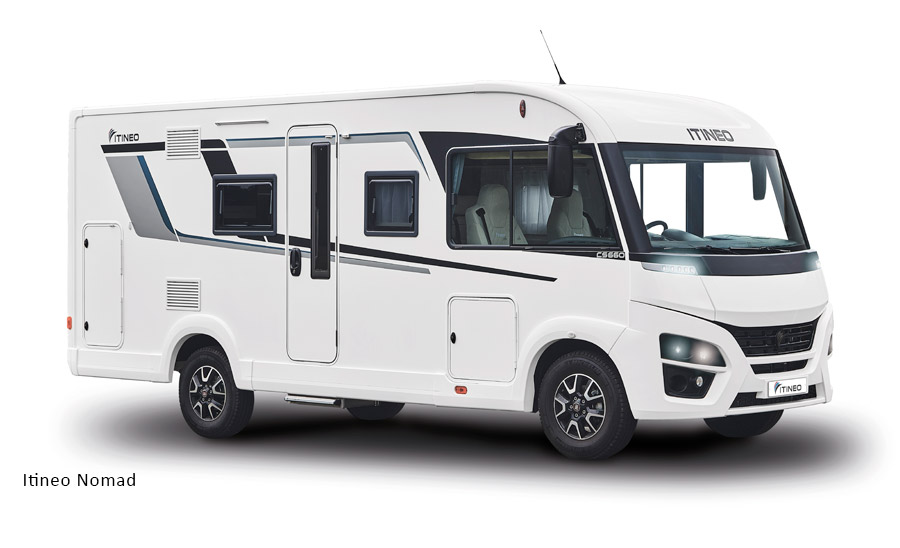 The birth of the compact semi-integrated
In the last millennium there were already small manufacturers in Europe who produced semi-integrated RVs in small sizes in a limited series, often with a fibreglass monocoque bodyshell. The real turning point, however, began in 2005, when Hymer presented its Hymer Van to the public – a semi-integrated compact vehicle, mass-produced using the sandwich panel technique, intended for a crew of two and without a high price. As early as 2007, several companies followed Hymer’s example. A separate case is the Brevio from Bürstner: perhaps ahead of its time, already in 2012 it was proposed as an alternative to campervans. It offered the handling of a campervan with the advantages of a semi-integrated one, such as good internal habitability and good thermal insulation. 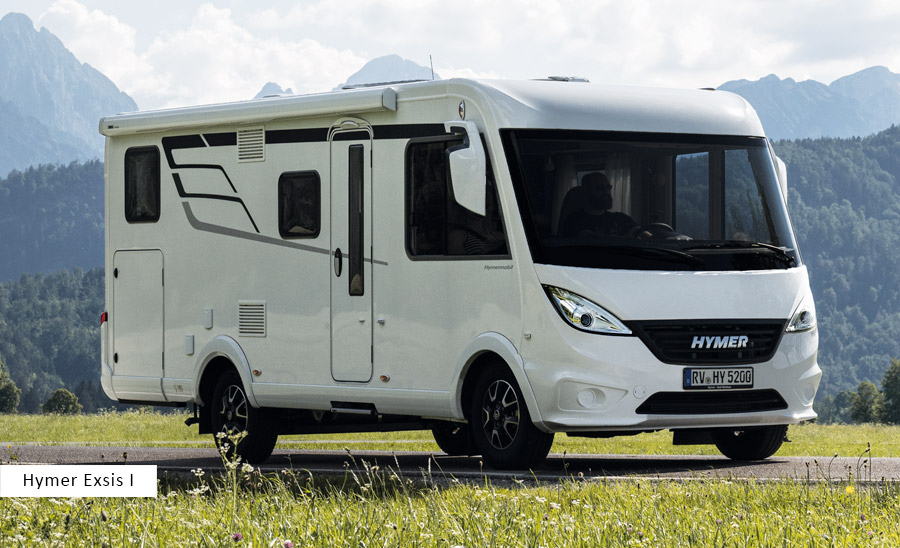 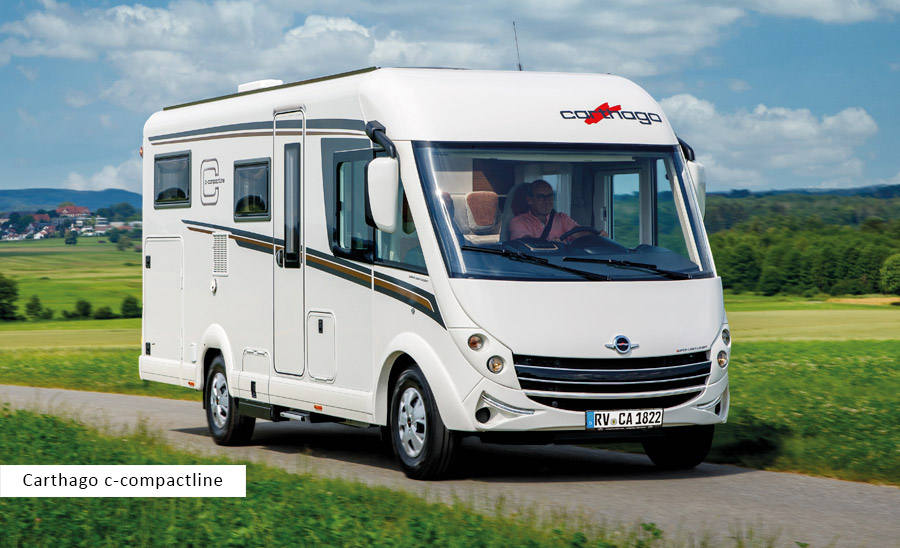 Compact motorhomes of the past
Even the compact motorhome is not new to the European market. Already in the 1990s some manufacturers offered models produced in small series: we remember the Mirage City, 480 cm long, based on Mercedes with an advanced cabin. In the 1980s, Arca took the concept of a mini-motorhome to extremes with the Mascotte model (only a few of them were built), which was less than 4 meters long. Hymer launched the first Exsis in 2003: it did not have the fully integrated cabin, but it served as a study for the next series, the 2006 Exsis, which showed a configuration similar to the one we know today and which started the series production of the compact motorhomes. Within a short time, Dethleffs began the production of its Globebus and the French group, Pilote, created the City Van brand, with a range of small motorhomes starting from 568 cm in length and 205 cm in width (the same width as the Fiat Ducato in the version van). Knaus also made its proposal, with the C-Liner of 2005. Finally, in 2012, Dethleffs presented the Evan (produced in a limited series, also in a 520 cm version): 215 cm wide, it had two access doors, one on the side and one at the rear, and it was available with a pop-up roof.

Extension of the space
All the companies producing campervans today offer models with pop-up roofs, but this solution is still to be applied to compact semi-integrated vehicles; however, this is not an unprecedented solution as models of this type already existed in 2009: the Hymer Van 512. The concept was also taken up by Trigano SpA, which in 2015 presented the Triaca concept with the Roller Team logo. More recently, the extendable wall solution was also tested: in 2015 Adria presented the Compact SLS (599 cm long) with a rear slide-out. 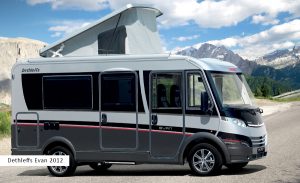 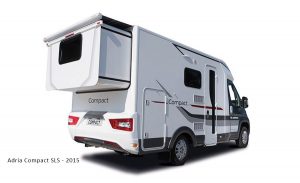 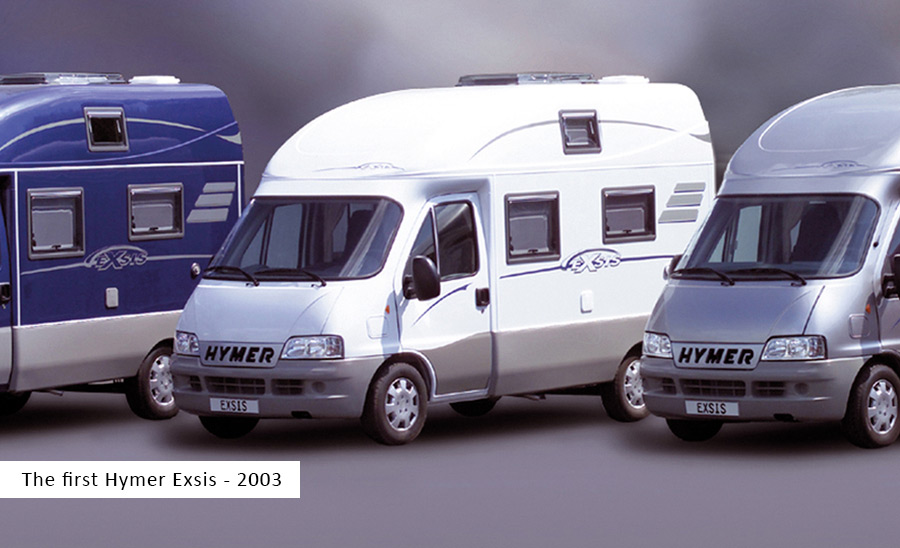 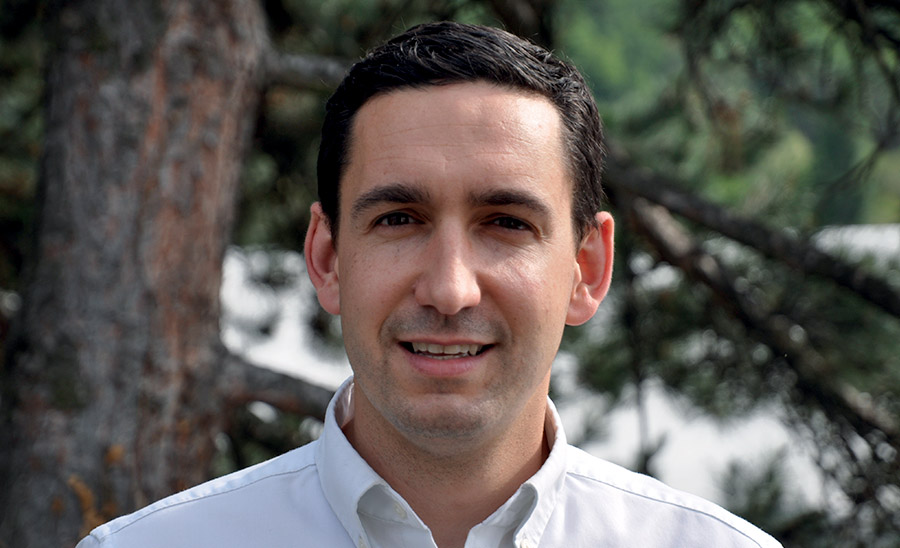 “Customers are getting used to smaller and more flexible vehicles,” says Romain Girard. “They are still looking for more space and storage in a low profile than there is in a campervan. The market is following this trend and we push for it with our range. Our X model and our S range are the perfect alternative to campervans because, with the same dimensions, you have exclusive layouts/storage and motorhome levels of insulation. Our approach is different than in past years because we follow campervan trends by offering low profiles in the same layout and dimensions but also creating a ‘never seen before’ product with the X which has a motorhome layout with an automotive design. Different types of customers are choosing compact vehicles. Newcomers are looking for flexibility, design and easy driving. Couples used to motorhomes are looking for more discrete and smaller vehicles. With Chausson and Challenger, we cover this market through two approaches, our S range which is very price aggressive and with proven layouts, and the X segment with innovation, design and exclusive layouts,” he continued.

Do compact semi-integrated (and partly integrated) motorhomes take away market share from camper vans and classic semi-integrated models, or do they create a market expansion? “In our experience, we clearly see newcomers who haven’t had any leisure vehicle before. As the market is growing, there may be a small cannibalization but there is an important conquest of new customers,” Romain Girard concluded. 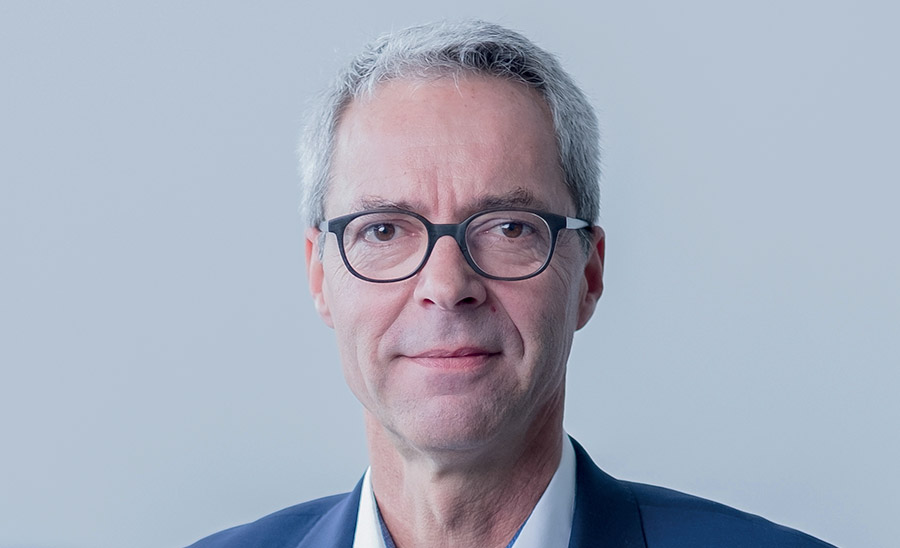 “We are currently experiencing a stronger trend for compact CUVs (540 or 600), as we call the extended panel vans, and for well-equipped semi-integrated motorhomes in demand,” said Stephan Diehl. “The market and the wishes of customers are as diverse as caravanning as a form of vacation is. We closely observe how the market develops and set trends such as our fully equipped special models like the Weinsberg CaraCompact Pepper or Knaus Van Ti Vansation,” he continued.

“It’s quite clear that we are keeping a close eye on developments,” answers Stephan Diehl. “We see great opportunities here to expand the target group and thus also the market. The use of compact vehicles tends to be for shorter vacations, but over time it can certainly whet people’s appetites for more, i.e. larger, motorhomes. In this respect, we see strong potential here,” he added.

What changes have there been the over the years? 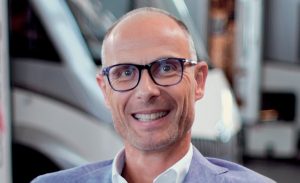 We asked Bernd Wuschack if it is correct to say that the segment of compact semi-integrated and integrated motorhomes is developing on the European market.

“In general,” says Bernd Wuschack “we perceive a trend in this direction in the market. However, from our point of view, it is important to distinguish among the different segments. In the premium segment, for example, we have stable demand for compact models, but no significant increases. Compact motorhomes could be an alternative to campervans. A comfort- and quality-conscious customer who wants to be on the road all year round would certainly prefer a motorhome with a sandwich body because of the better insulation and winter properties. I think that these motorhomes will not take market share away from the campervans, but rather complement them.”

We also asked: “Who are the buyers of compact semi-integrated and integrated motorhomes? Could it be retired couples who no longer want a big, heavy vehicle?”

“Yes, in the premium segment,” said Bernd Wuschack “It is exactly this target group. A maximum weight of up to 3.5t and the narrow, manoeuvrable body dimensions are decisive. Sometimes there are also issues such as limited parking space in front of one’s own house, or that the children can also take it on the road with them,” he concluded. 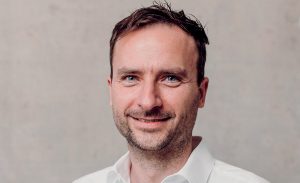 “Compact semi-integrated motorhomes, e.g. the Van series of Sunlight and Carado, are a perfect complement to our overall product portfolio,” explained Rainer Wingart. “Compact semi-integrated motorhomes combine the advantages of a motorhome and, depending on the layout, the dimensions of a campervan. Therefore, they are a perfect match for customers who want more insulation, living space and storage capacity. Due to rising demand, we enlarged the variety of compact class motorhomes. Our Van series complements our compact class of motorhomes and is therefore very much related in terms of finish and equipment.”

We asked Rainer Wingart, “Who are the buyers of compact semi-integrated and integrated motorhomes?” He answered: “As the Van series has two fixed sleeping berths, this series is mainly intended for couples or single travellers who place great value on affordable, compact and agile vehicles.”

We also asked: “Is there a market for compact integrated motorhomes too? In what price range?”

“For me as a product manager, new products are always exciting, but there must also be a target group and a market for them. Such a development must be well thought out in terms of development costs, but also the increasingly important safety system is a challenge.” 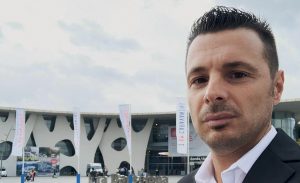 “In general, the buyers of these vehicles are retired couples who are looking for a manageable vehicle with a reduced mass, but there are also young couples without children who, as a first experience with an RV, start from a small vehicle. Giottiline focuses its production in the entry level segment of the market, with prices around €50-60,000. As for motorhomes, the impressive development of five to six years ago was followed by a rapid decline if we consider the entry level segment of the market. The costs to build a motorhome are important.” Matteo Giotti concluded.