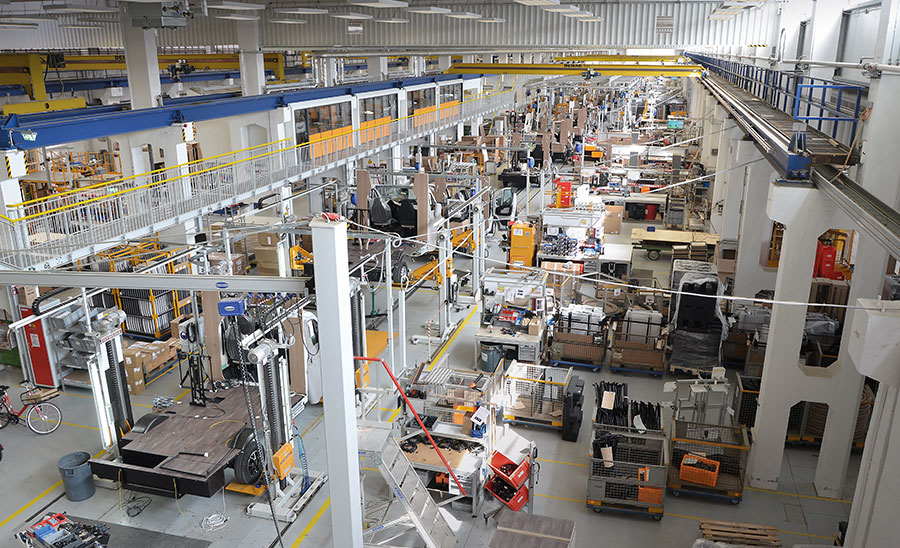 A state of the art factory

CAPRON is a company that is still young but certainly one of the most important production sites of the Erwin Hymer Group, which thanks to the products produced at the Capron plant has had excellent results in the price range under 60,000 euros

CAPRON is one of the largest sites in Europe that produces motorhomes and campervans. The entire factory premises are 300,000 m² with a production area of 50,000 m². Here, the first production line is over 450 metres long. It is run by two managing directors: Daniel Rogalski and Christian Geiger.
CAPRON (founded in 2005) and the brands Carado and Sunlight have been independent brands/ companies within the Erwin Hymer Group since it was founded and represent entry level brands. Each brand has its own sales network that is independent of other brands. 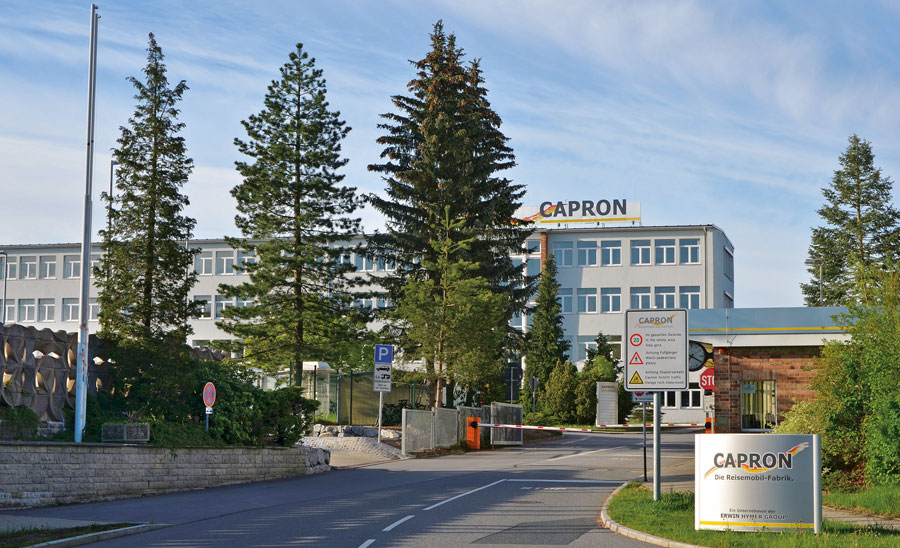 “CAPRON manufactures the motorhomes and camper vans for Sunlight and Carado. At CAPRON we only work on an order basis,” says Frank Kramer. “In the past few years, production capacities have been adapted to market demand and production has been expanded. Due to the great demand for motorhomes and camper vans, the product portfolio was changed a few years ago and CAPRON became a specialized motorhome and camper van manufacturer. In the first few years, caravans were also manufactured as well as motorhomes,” he continued.
The production facilities are permanently adapting to changes in demand and being modernized. In 2015, for example, a second production line was put into operation and in 2018 a new, modern part of the facility for furniture production was opened.
Carado and Sunlight vehicles are available in many countries across Europe, but also in other parts of the world, such as Asia or New Zealand. The most important market is, of course, Europe. 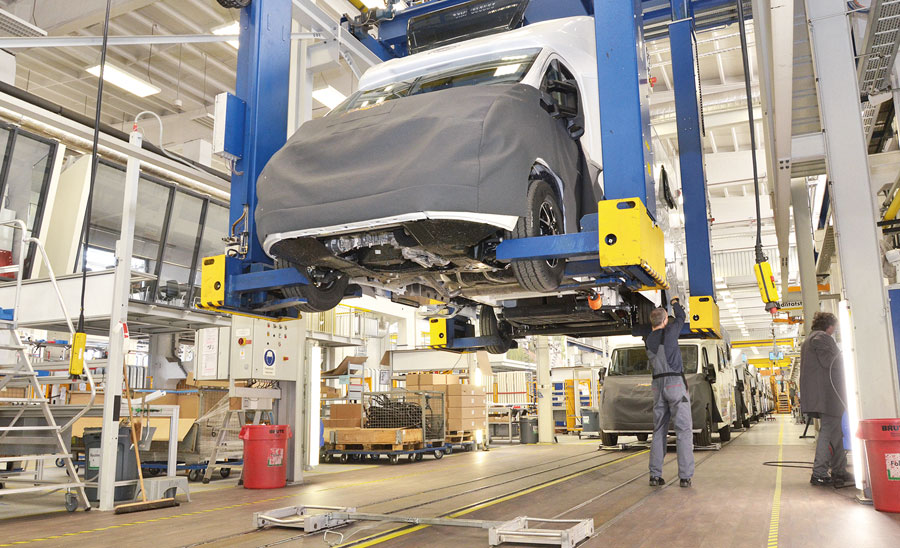 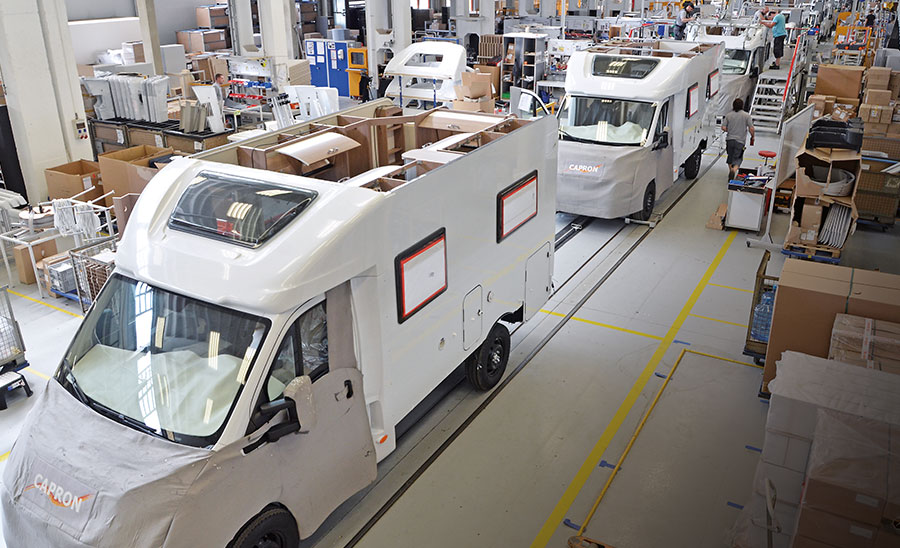 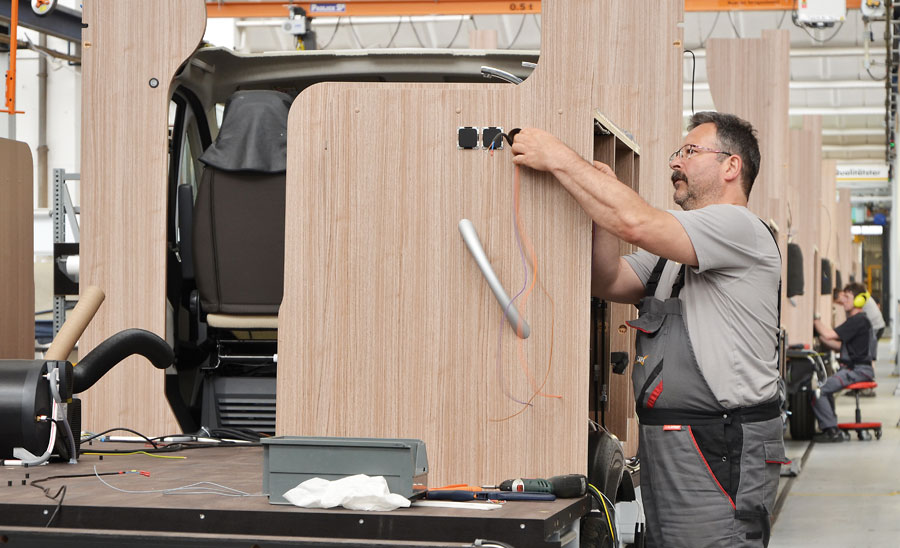 With the creation of Capron, the Erwin Hymer Group sought to enter the medium and low-medium price market segment dominated by Italians and French, but has it been successful?
“The vehicles from Sunlight and Carado,” says Frank Kramer, “offer a particularly attractive price-performance ratio with high ‘made in Germany’ quality and in recent years, both brands have emerged as winners several times in renowned customer surveys and received various awards, so the goal has obviously been achieved. Carado and Sunlight offer high reliability and practicality at a very attractive price. In order to achieve this, CAPRON pays particular attention to efficiency, quality, order and cleanliness in production. We also attach great importance to our employees, because they are an important key to our success.”
There are two production lines at CAPRON. These are organized flexibly so that different models can be produced as required. Although both production lines can be flexible – but very structured – so they can react as quickly as possible to any adjustments necessary. They are closely linked to the logistics processes.
The people working on the production lines are always of great importance. CAPRON invests heavily in staff training and there have been many changes since 2005 to today.
“Our workforce has grown significantly since CAPRON was founded in 2005,” says Frank Kramer. “New employees are thoroughly trained and there are also various training opportunities. For many years we have also been training skilled workers in various professions, which we then take on. For this purpose, CAPRON has a modern training center with its own workshops and machine room in which the trainees are instructed. For trainees with a long commute, there is also separate accommodation that are furnished like hotel rooms.” 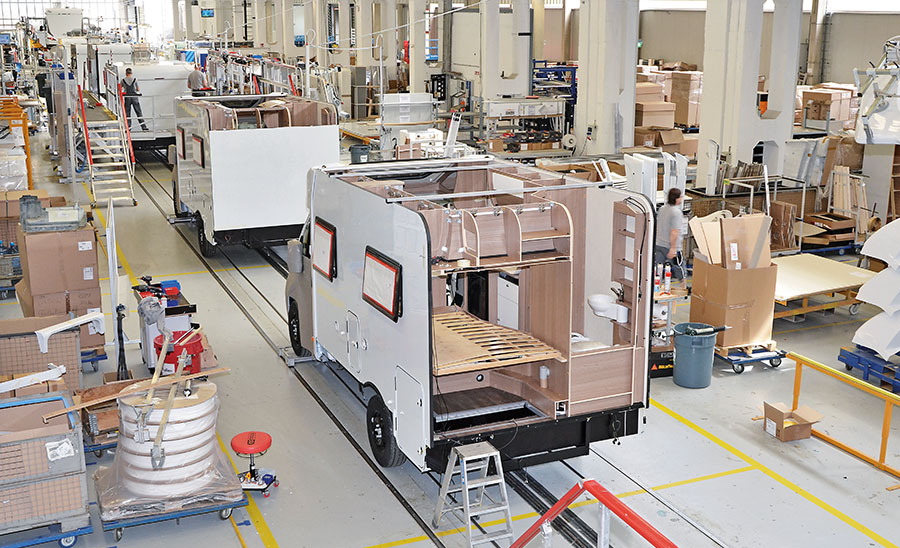 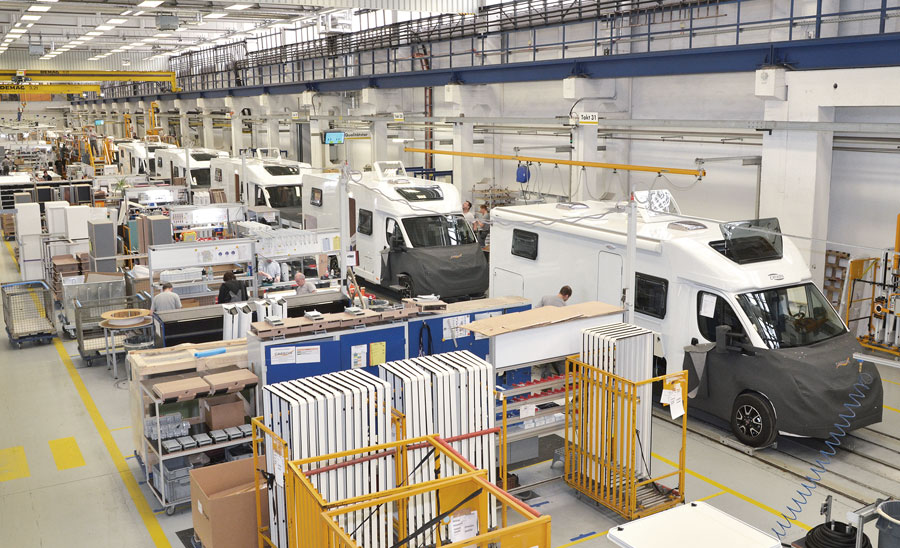 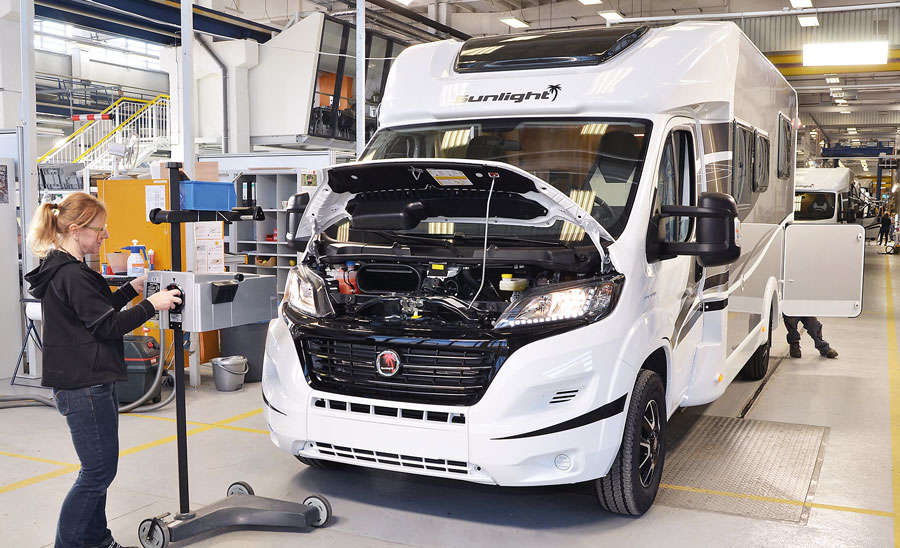 The product that comes out of the CAPRON factory has a reputation for being reliable, despite the sale price being quite low: what is the secret? “Simple” construction techniques, but tested for years and years of use?
“Already during the development of the Sunlight and Carado campers, we place great value on practical equipment and proven technologies,” says Frank Kramer. “We can also fall back on the valuable, decades-long experience of our sister companies in the Erwin Hymer Group. In addition, high-quality materials and branded articles are mainly used in our vehicles. In doing so, we pass on to our customers the advantages that arise from joint purchasing across the entire Erwin Hymer Group. During production, attention is always paid to good workmanship. To this end, quality controls take place in all work areas before an additional final control and further audits are carried out. During assembly, attention is also paid to very efficient production processes. In order to always work economically, we also have a special logistics concept. The overall package of these measures has a positive effect on the quality and prices of our vehicles,” added Frank Kramer.
There are some synergies with the Erwin Hymer Group: CAPRON, Carado and Sunlight work closely in many areas with the Erwin Hymer Group, particularly in relation to purchasing and development, for example, but also many other areas.
So, we have a final answer about CAPRON: what has changed and what will change with joining the Thor Group? Frank Kramer answers: “Not much has changed in day-to-day business. In the future, however, we and our customers will certainly be able to benefit from further synergies that result from the close cooperation between the Erwin Hymer Group and Thor.” 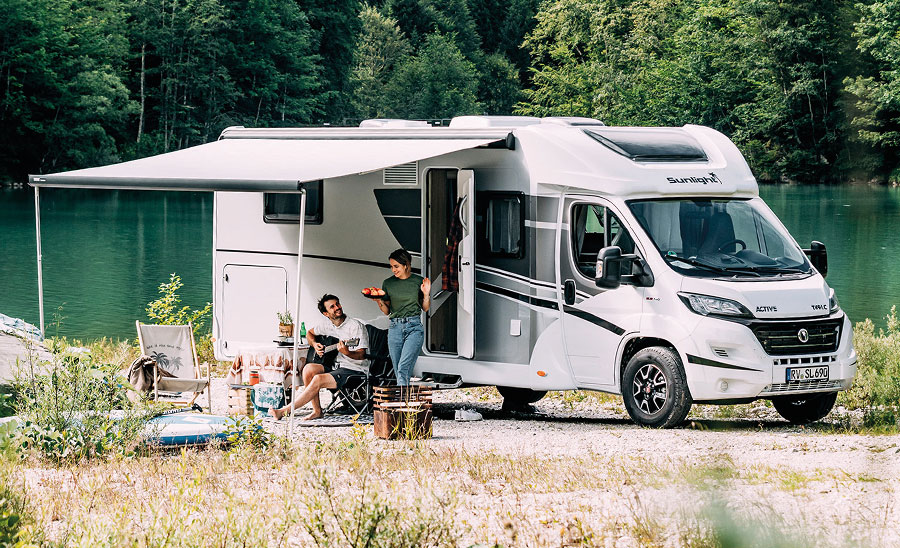 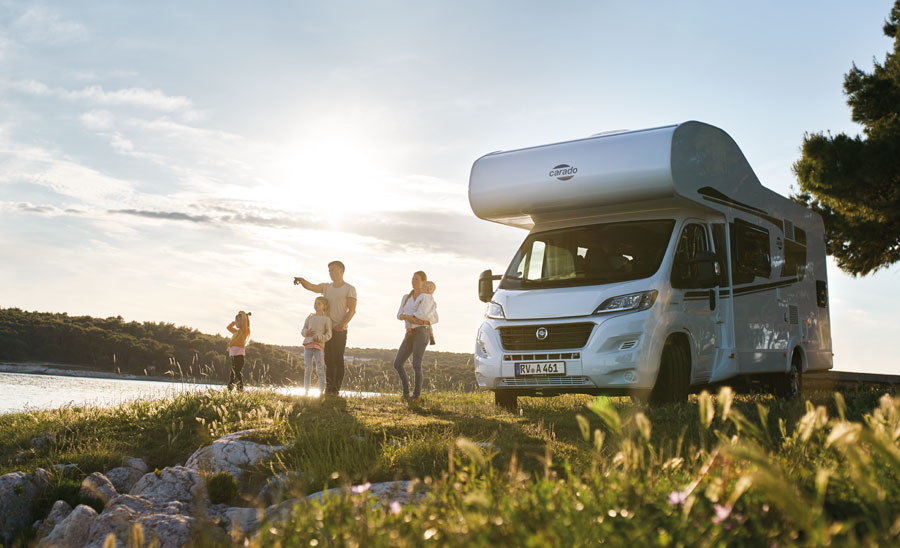 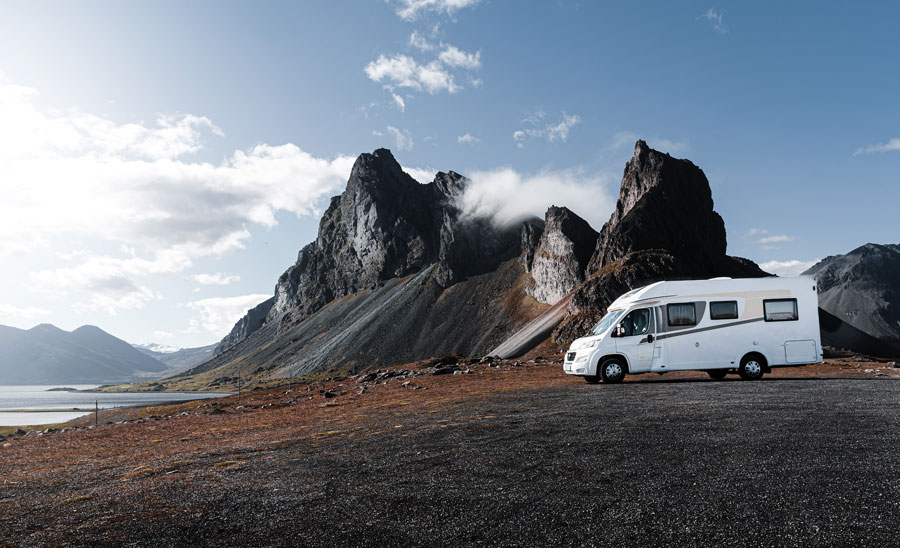 The Carado and Sunlight motorhome brands vehicles are produced in the Capron plant. There are various models offered across the two brands: the differences are minimal, the shell is identical, as well as the internal layout, but the fabrics, wood finishes and some details change.

T Series. These are the classic semi-integrated models, with lengths between 595 and 740 cm and a standard width of 232 cm. They can be equipped on request with the drop-down bed in the front. They are fitted out on Fiat Ducato and partly on Citroën Jumper mechanics.

V series. These are compact semi-integrated (“vans”) with reduced width (214 cm), without a front drop-down bed. They adopt the Fiat Ducato and the Citroën Jumper mechanical bases.

A series. Traditional overcabs designed for families and rental networks. They are built on a Fiat Ducato basis.

I Series. They are part of the entry level segment of the motorhome category, intended for those looking for an RV with generous interior space, with integral body (without the original cabin), but with a rather low price.

Carado CV and Sunlight Cliff. These are the campervans of the two brands, increasingly popular on the European market. They are fitted on Fiat Ducato base vehicle, with lengths of 541, 599 and 636 cm.