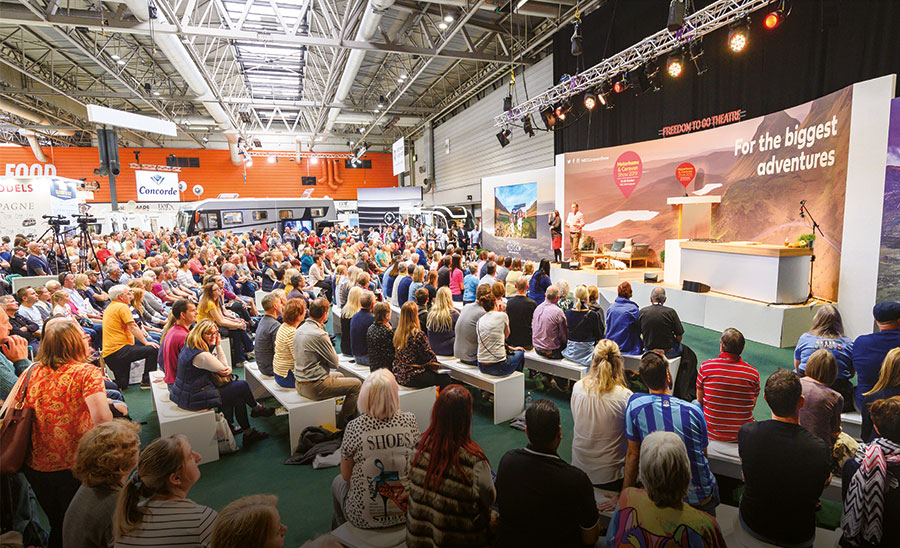 The UK’s biggest and most important show of the year

Taking place in October every year, the Motorhome and Caravan Show is probably the most important UK consumer event of the year for the British caravan industry. It is the first opportunity for consumers to see all the new model yearís products in one place, to place an order for early delivery the following year, and important for manufacturers and suppliers to achieve sales to plan their production over the winter months and beyond.

This year’s Motorhome and Caravan Show had 11 halls hosting around 1,000 recreational vehicles, accessories from UK and global suppliers (such as AL-KO, Dometic and Truma), car manufacturers and representatives from holiday destinations. These key sales events are supported by the manufacturers, whereas the regional caravan and motorhome shows, such as those in Manchester and Glasgow, tend to be hosted by local dealers.

Despite Brexit still looming over the UK economy, 94,240 visitors attended the show. This was only just under two percent less than the record number the 2018 show achieved, proving that UK consumers are still interested in the caravan and motorhome lifestyle, and motivated to come to the show and see the latest the caravan industry has to offer.

This was reinforced by the UK’s Caravan and Motorhome Club reporting bookings at its network of sites were seven percent up for the autumn and winter of 2018 to 2019 compared to the 2017 to 2018 season.

The show’s organiser, NCC Events, had celebrities and a full programme of talks and cookery demonstrations in a ‘live theatre’ to entertain visitors, free towing lessons provided by both the Caravan and Motorhome Club and the Camping and Caravanning Club, and opened the show with a stunt of an ultra-endurance cyclist (Mark Beaumont) towing a caravan with his bike.

Despite the 1.9 percent decline in attendance figures NCC Events remained positive: “It has been a very successful show with lots of very positive feedback from exhibitors and visitors alike. We would like to thank all our exhibitors and partners for their support, putting on fabulous displays and for creating great experiences for show visitors.”

For the first time at the show, all the brands from the Erwin Hymer Group (Elddis/Xplore/Compass/Buccaneer, Sunlight, Dethleffs, Laika, Hymer, Eriba, Hymercar, Carado. Etrusco and Burstner) were all together in one hall, between the two largest British manufacturers with the biggest stands, the Swift Group and Bailey of Bristol.

Another European brand, Knaus Tabbert, took advantage of the extra stand space that became available after the British manufacturer, Lunar Caravans, went into administration this summer, so had its biggest stand ever with over 30 models from its Knaus and Weinsberg caravan, motorhome and CUV ranges (some of which have UK-specific specifications, including entrance door on the ‘right’ side for the UK) at the show. 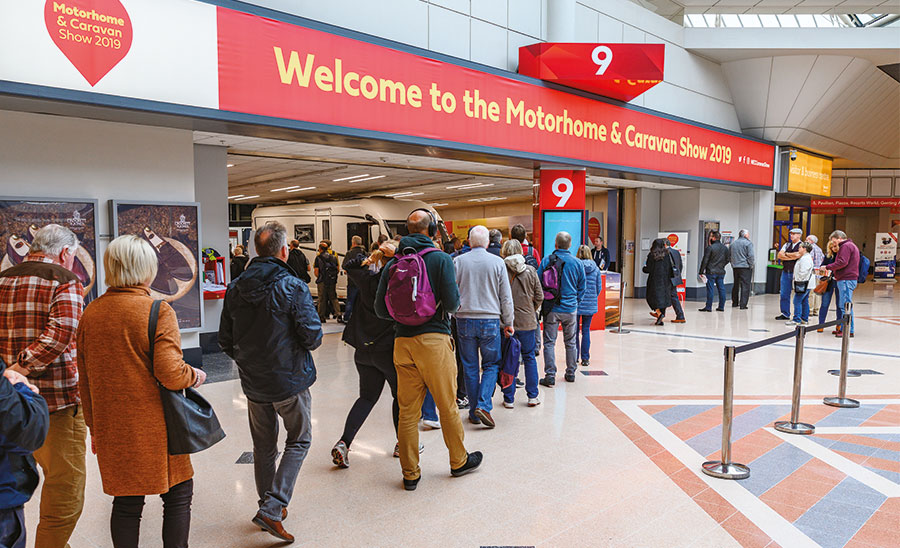 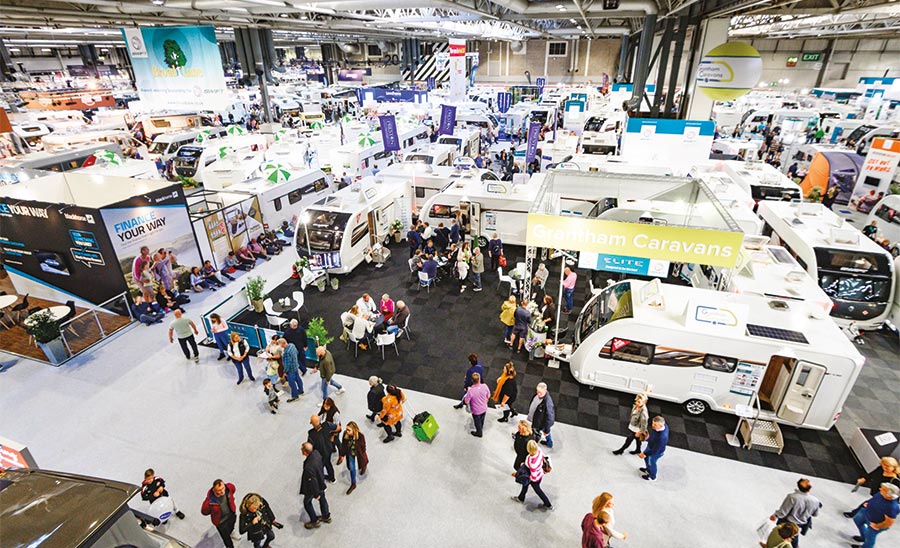 An excellent show
There were many positive comments from exhibitors. The Group Commercial Director from the Swift Group, Nick Page said it was: “An excellent and engaging show with healthy sales across Touring Caravans, Motorhomes and Holiday Homes. We were especially delighted by the response to Swift’s new ranges and layouts. For many this is the first opportunity to view the exciting 2020 developments from Swift including the Basecamp Special Edition, Edge Motorhomes, and Challenger X and Eccles X, and the positive feedback and sales generated has been very encouraging.”

Simon Howard, Marketing Director at Bailey of Bristol also reported positive results from exhibiting at the show: “Naturally we would like to thank everyone who came to see us at the Motorhome and Caravan Show at the NEC, Birmingham. The show kicked off with our live launch on the opening day and resulted in caravan and motorhome sales up 4 percent and 6 percent respectively, with the launch of five new product ranges paying dividends in terms of overall results. Products across the spectrum from top-of-the-range Autograph motorhomes to the daringly different new Discovery caravan range targeted a new audience. Overall the show was a great success, with sales surpassing all expectations.”

Launching a new caravan range, and another brand to add to the increasing number of 2.5m (8ft) wide models now available in the UK, the other British manufacturer, Coachman Caravans (part-owned by the Swedish manufacturer, Kabe) said it had a successful experience of the show, with Elliot Hibbs, Managing Director commenting: “Coachman Caravans had a fantastic show with retail sales in line with the NEC October Show in 2018. All models across our range performed well, but the stand-out model for us was the new Laser Xcel 875 (8 foot wide) contributing to well over 10 percent of our retail sales. The new Acadia range, with ALDE heating as standard, was very well received with increased sales versus its predecessor the Pastiche.” 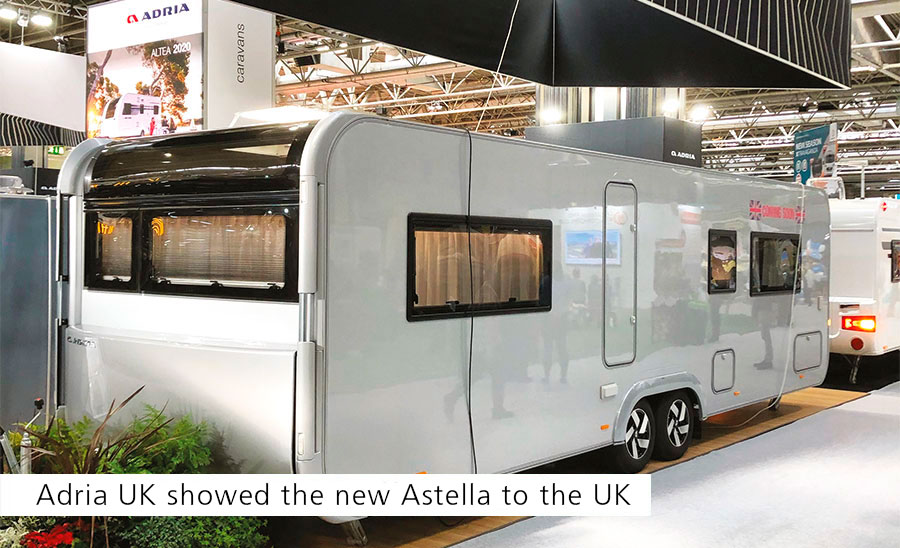 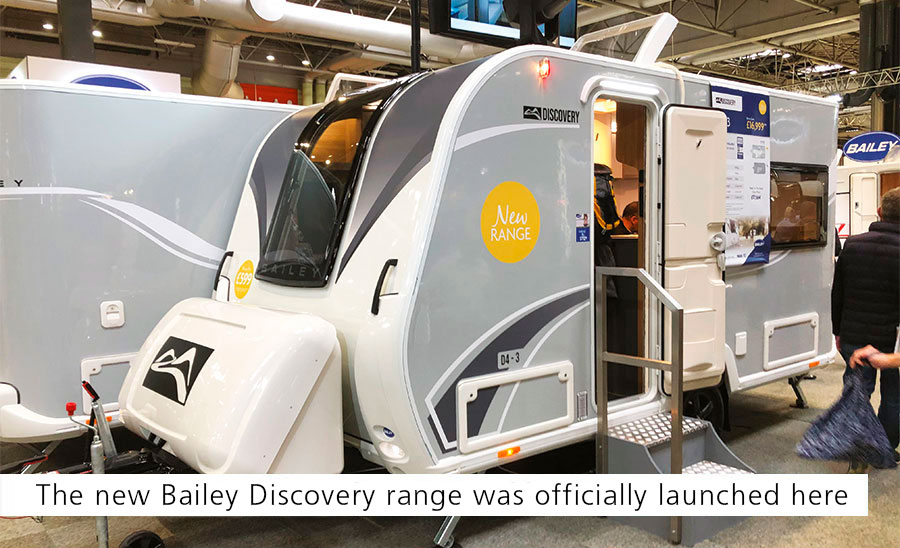 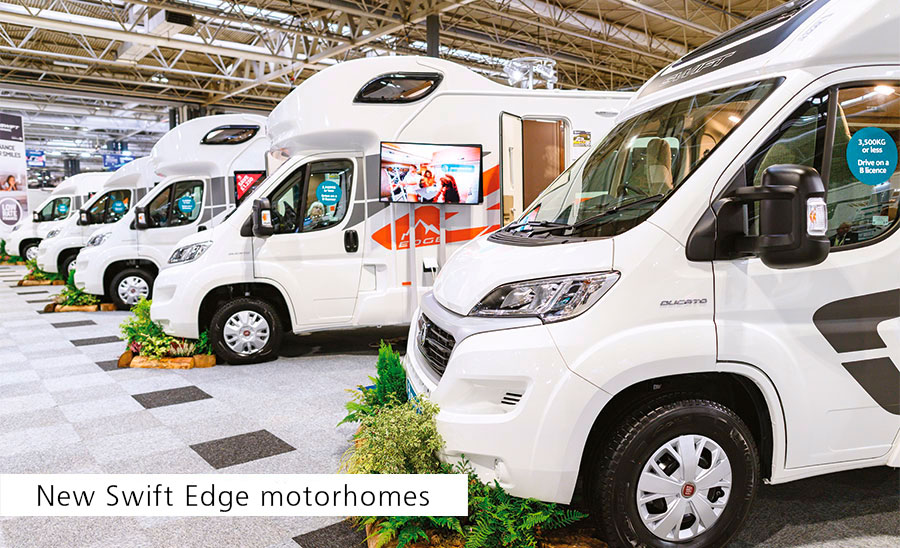 Not only vehicles
Supplier and accessory brands were busy at the show as well. Truma has noticed an interesting trend at the show over the last two years – a significant rise in interest in its air conditioning units. Commenting on this, Martin Fitzpatrick, joint Managing Director of Truma UK said: “This year we generated the highest amount of sales leads than ever before for our air con range, particularly the new Aventa compact and compact plus. The rise in interest in air conditioning units could be due to several factors: a higher percentage of families travelling to Europe, recent summer heat waves, customers wanting greater comfort and those wanting to keep vehicles cool for pets as much as people.”

Whale, the North Ireland-based, global supplier of low voltage pumps, plumbing and heating attracted the public interest with its new Heat Air room heater. Whale’s Commercial Director, Mark Walmsley commented: “We were encouraged by the growing interest in our underfloor heating solutions which are ideal for OEMs looking to free-up additional living and storage space, plus the interest in our new Heat Air room heater (5GE and 6GE Gas and Electric models) which were launched at the show. We are delighted that Heat Air along with the Whale Expanse water heater are now being fitted by Erwin Hymer UK in a number of its ranges, Autosleepers in its van conversions and Auto Trial in one of its coachbuilt motorhome ranges.”

The Motorhome and Caravan Show was a well presented show, and most exhibitors claim it was successful for them. Everyone hopes that consumers will have the confidence to buy all the new models and products presented, and in the meantime, the caravan industry has to prepare for the next UK shows in the New Year at Manchester, Glasgow and again in Birmingham to try to make 2020 a great year for the manufacturers and the consumers alike. 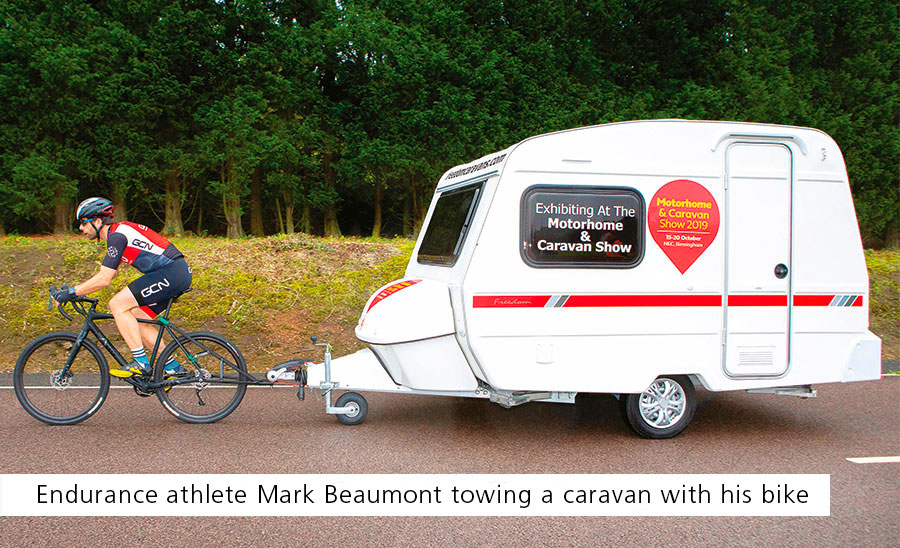 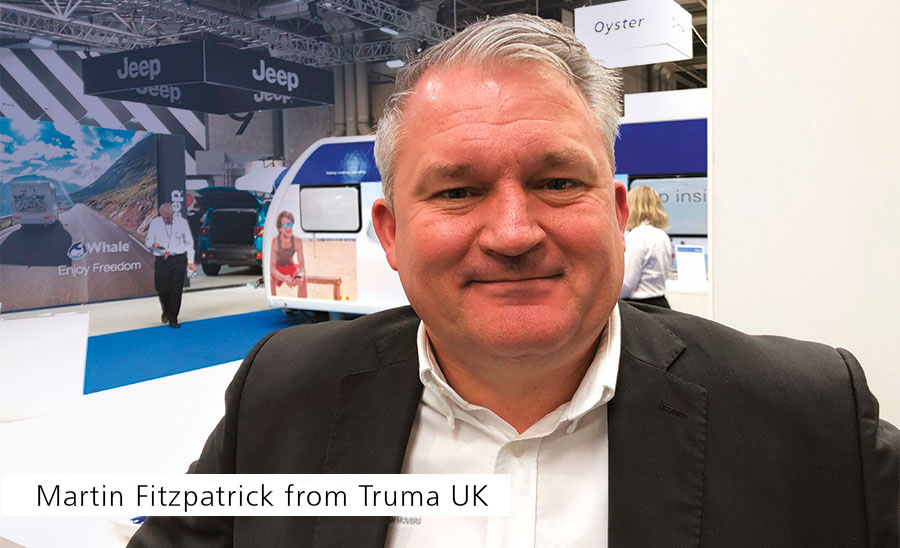 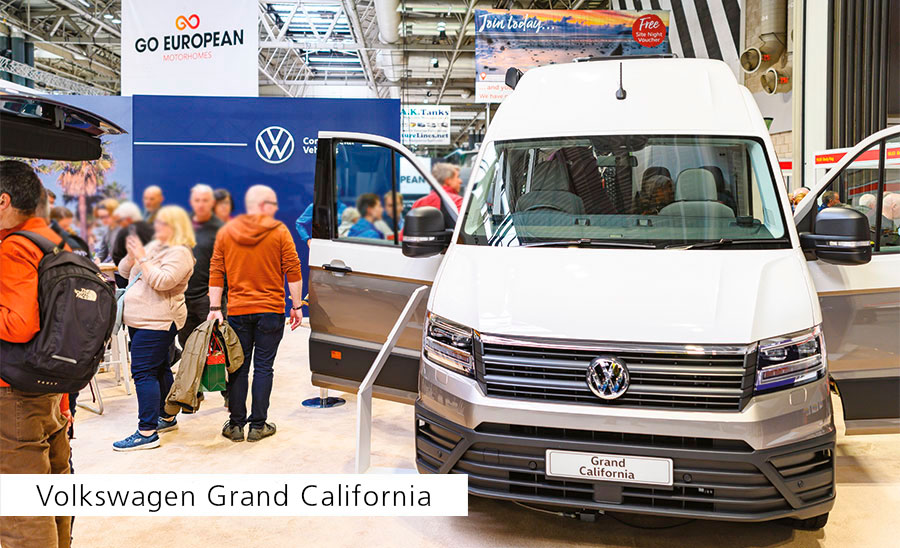